This is the time of year when I start to avoid turning on the oven at all costs. So what’s for dinner when it’s too hot to cook? Slow Cooker BBQ Chicken! You can have this tasty chicken in the slow cooker doing its own thing while you’re enjoying a lazy summer day. Plus, unlike a hot oven, the slow cooker won’t make your AC work overtime. ;)

This slow cooker BBQ chicken is almost too easy to be true. Just add some seasonings to boneless, skinless chicken breasts, cover them with your favorite BBQ sauce, and press go. A few hours later, the chicken is tender, tangy, so saucy, and delicious!

What Size Slow Cooker to Use

My slow cooker is about 5 quarts and it was only about ¼ full, so you could definitely use a smaller cooker if you want, but I wouldn’t go any larger. Some slow cookers need to be filled a minimum amount to avoid cracking, so make sure to check your owner’s manual first.

What Kind of BBQ Sauce to Use

You can literally use any type of BBQ sauce for this chicken. I tested the recipe using a very basic and inexpensive BBQ sauce just to make sure it was still delicious on a budget, but you could certainly ramp it up by using a fancier BBQ Sauce. You can also play around with different flavors of BBQ sauce, like smoky, honey, pineapple, spicy, etc.

How Do You Serve Slow Cooker BBQ Chicken?

The classic way to serve this chicken is on a bun, like a classic BBQ chicken sandwich. Make sure to add some coleslaw and pickles to make it extra delish! But you can also use this BBQ chicken for tacos, pizza, bowl meals, on a baked potato or sweet potato, on nachos, or even on a salad.

What to Serve with Slow Cooker BBQ Chicken

Whenever I make BBQ anything I always opt for the classic comfort food sides like potato salad, mac and cheese, three bean salad, or Cowboy Caviar. 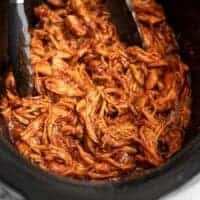 Place the chicken in the bottom of the slow cooker and pour one 18oz. bottle of BBQ sauce over the chicken, making sure it’s fully covered.

Place the lid on the slow cooker on cook on high for 2.5 hours or low for 4-5 hours.

Use two forks to shred the chicken. If the chicken doesn’t pull apart easily, you can let it cook a little longer.

Give the chicken a good stir to make sure it’s all well coated in BBQ sauce, then it’s ready to serve!

Now I need a plate full of BBQ Chicken Nachos. 🤤

Slow Cooker Buffalo Chicken is tender, juicy, tangy, and rich all at the same time! Perfect for sandwiches, nachos, salads, pizza, and more.

This Slow Cooker Buffalo Chicken recipe was one of the top things I was looking forward to making once I figured out the formula for my Homemade Ranch Seasoning. The slow-cooked chicken is tender, spicy, tangy, and rich all at the same time and there are a hundred different ways you can use it! Sandwiches, dips, salads, pizza, and more. I’ve got a full list of how to use this insanely easy and delish shredded buffalo chicken below, so don’t miss it! I’m sure this is something you’ll want to make over and over again throughout football season and the holidays.

What is Buffalo Sauce?

If you’re unfamiliar with this American classic, Buffalo Sauce is basically a combination of hot sauce (traditionally Frank’s Red Hot Sauce) and butter, which creates a super tangy, spicy, and slightly rich sauce that is used to coat fried chicken, among other things. For this slow cooker buffalo chicken, we’ve gone one step further and added ranch seasoning mix, which is a super tasty combination of buttermilk powder, herbs, and spices. The ranch seasoning adds a huge burst of flavor to the sauce and makes it even a little bit more creamy. It’s just to die for!

What Kind of Hot Sauce to Use

As mentioned above, buffalo sauce is usually made with Frank’s Red Hot Sauce, but you can use any similar vinegar-based cayenne flavored hot sauce for this recipe. I used the ALDI version of Frank’s and it was great!

Can I Substitute the Ranch Mix?

How to Use Slow Cooker Buffalo Chicken

Okay, here’s the fun part. How do you use this delicious shredded buffalo chicken? SO MANY WAYS. Here are some ideas:

My mouth is totally watering just typing all of that out! This stuff is seriously so good. 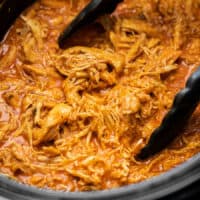 *You can use a store-bought packet of ranch seasoning instead of the homemade mix, if needed.

Place about 2 lbs. boneless, skinless chicken breast in the bottom of a slow cooker. Cut 4 Tbsp butter into chunks and place them on top of the chicken.

Pour the hot sauce mixture over the chicken and butter in the slow cooker.

Place the lid on the slow cooker and cook the chicken on low heat for four hours.

After four hours the chicken should be tender and easily shreddable using two forks (if it’s not, let it cook another 30 minutes).

Fully shred the chicken, then enjoy!