OMG, y’all. Stop everything. This is important. I knew I loved cornbread, but I didn’t know I could love it this much. I decided to add some sweet potato mash to my Everyday Cornbread, plus a couple spices and sour cream for richness and… WHOA. It took everything in me not to eat the entire […]

OMG, y’all. Stop everything. This is important. I knew I loved cornbread, but I didn’t know I could love it this much. I decided to add some sweet potato mash to my Everyday Cornbread, plus a couple spices and sour cream for richness and… WHOA. It took everything in me not to eat the entire pan of this Sweet Potato Cornbread. 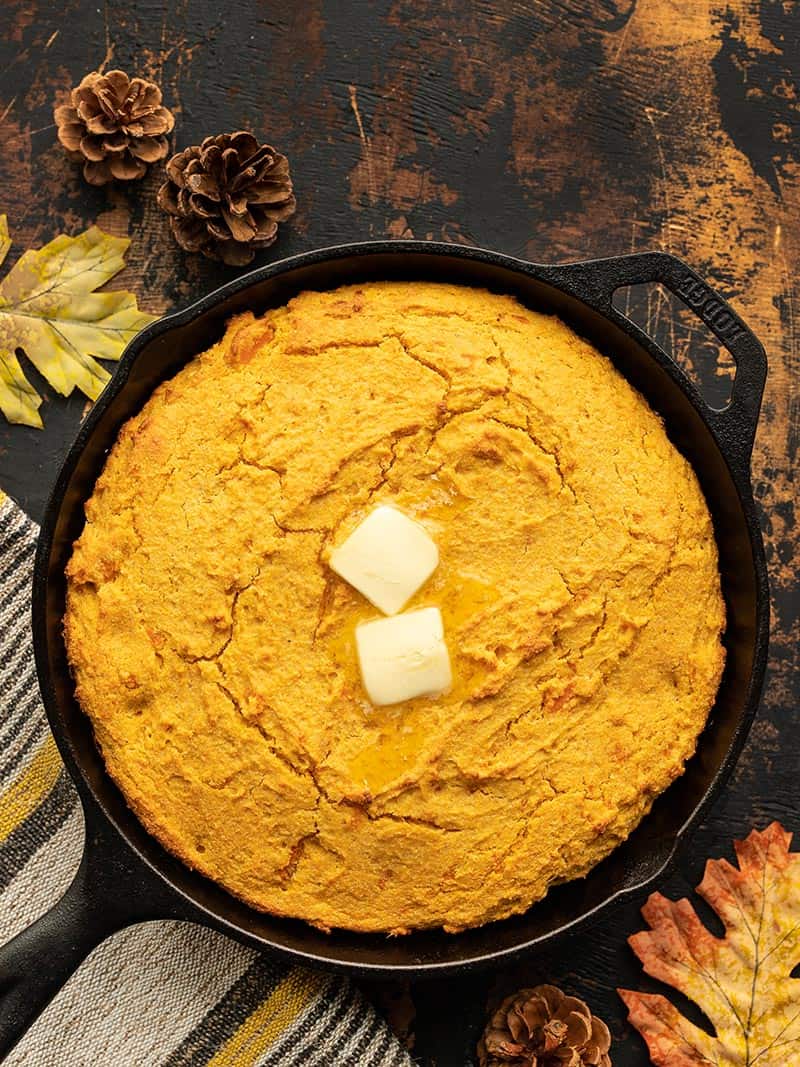 This recipe is a hybrid between my Everyday Cornbread and these amazing Sweet Potato Corn Bread Muffins from the New York Times. The NYT’s addition of cinnamon and nutmeg was absolutely spot on and gave the cornbread an amazing aroma. Since I had already bought some sour cream to top my chili, I decided to incorporate that into the batter, like this recipe from Leite’s Culinaria. Neither of those recipes used nearly enough sweet potato for me, though, so I upped mine to 1.5 cups. I didn’t want to waste that lovely sweet potato!

This cornbread is definitely on the sweeter side as far as cornbread goes, but it also has a good amount of warm, aromatic spices to keep it from being too dessert-like. It pairs well with both sweet and savory flavors. The texture is rich and thick, so one piece will definitely add a lot to your meal!

What to Serve with Sweet Potato Cornbread

The subtle sweetness of this sweet potato cornbread pairs absolutely perfectly with the warm spices of a bowl of chili, but I also have to say, it’s awesome with coffee. I’ve also been eating it for breakfast with a thick pat of butter and with a fried egg on the side.

How to Store the Leftovers

Make sure you allow the cornbread to cool completely to room temperature before placing the leftover pieces in a resealable container and storing in the refrigerator. This cornbread also freezes quite well! I suggest wrapping each piece in plastic or waxed paper, then storing all of them in an air-tight freezer bag or freezer-safe container. You can thaw them at room temperature or with a quick zap in the microwave. 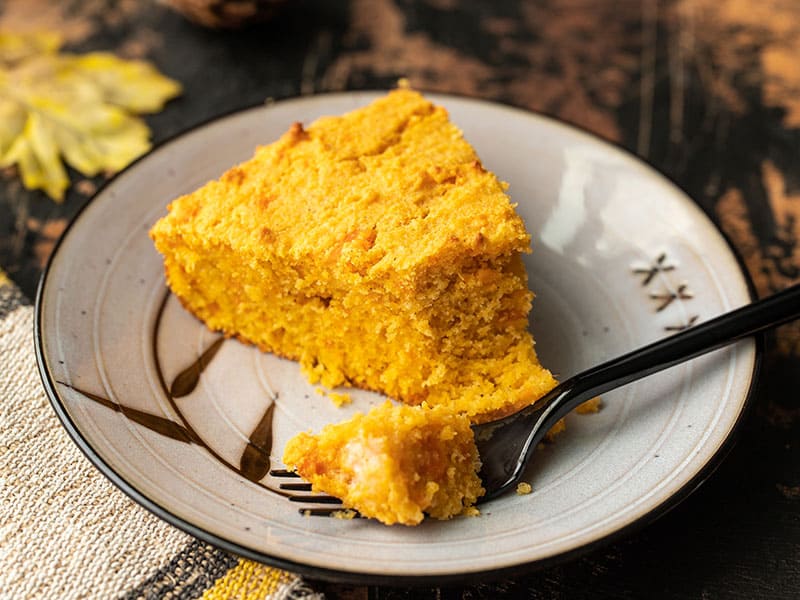 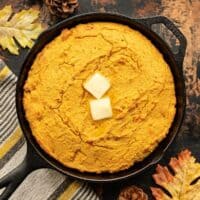 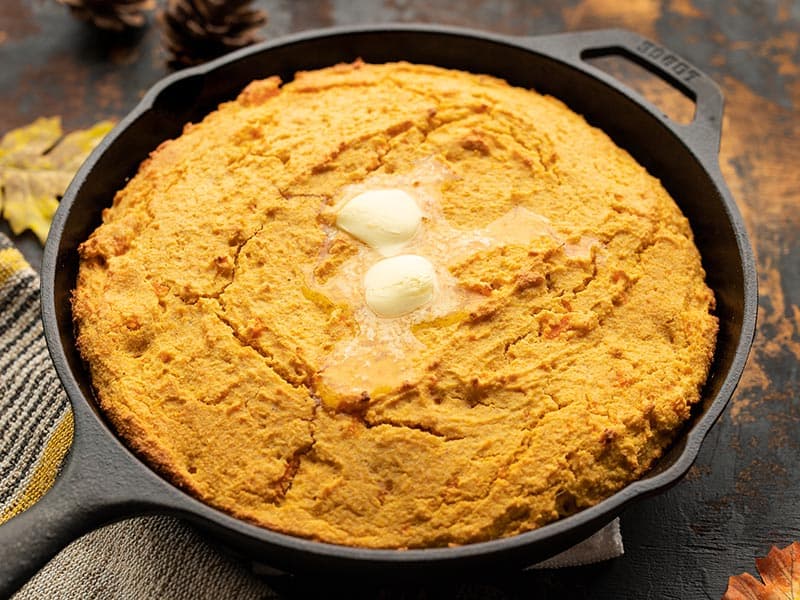 How to Make Sweet Potato Cornbread – Step by Step Photos 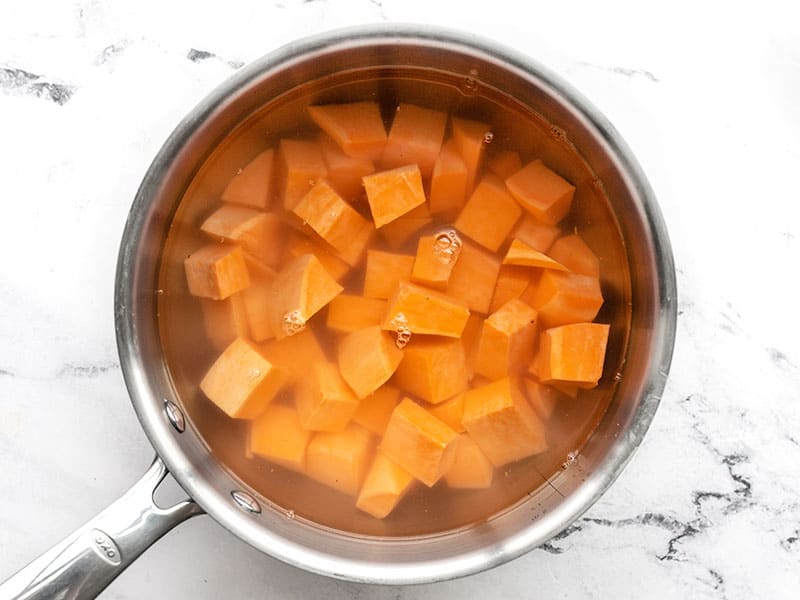 Peel a 1 lb. sweet potato and cut it into one-inch cubes. Place the cubes in a pot, cover them with water, and bring the pot up to a boil over high heat. Let the sweet potatoes boil until they’re soft and fall apart when pierced with a fork (about 10 minutes). Drain the sweet potatoes and set them aside.

Once the sweet potatoes are done boiling, get the skillet ready and begin to preheat the oven. Rub about 1/2 Tbsp of oil inside a 10″ cast iron skillet, place it in the oven, then set it to preheat to 425ºF. 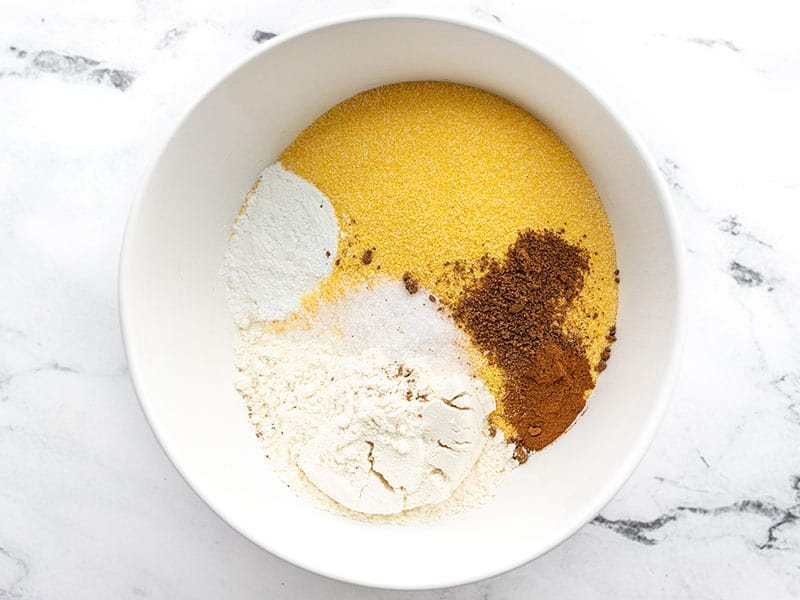 While the potatoes are boiling (or after they’ve drained), combine the dry ingredients. In a large bowl, stir together 1.5 cups yellow cornmeal, 1 cup all-purpose flour, 1/2 cup sugar, 1 Tbsp baking powder, 1 tsp salt, 1/2 tsp cinnamon, and 1/2 tsp nutmeg. Stir them together until they are very well combined. 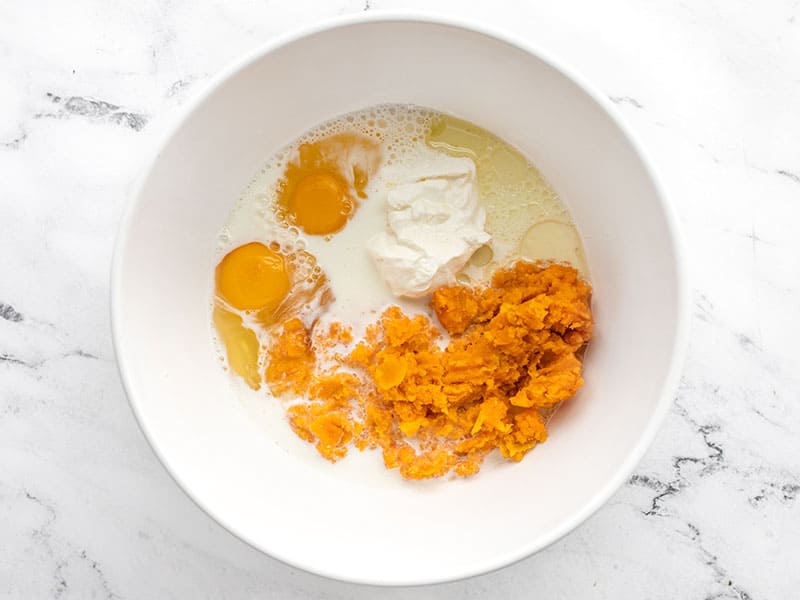 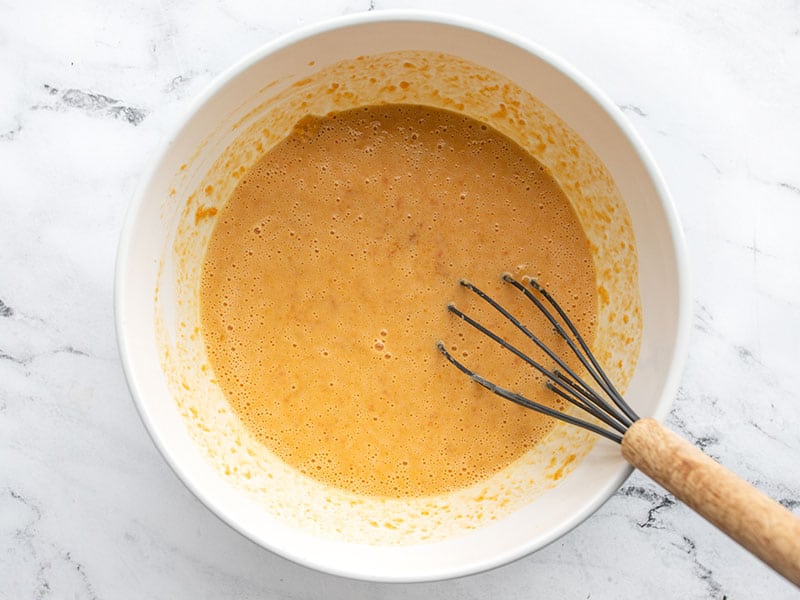 Whisk the ingredients together until fairly smooth. You may still have a few small chunks of sweet potato, but that’s okay. 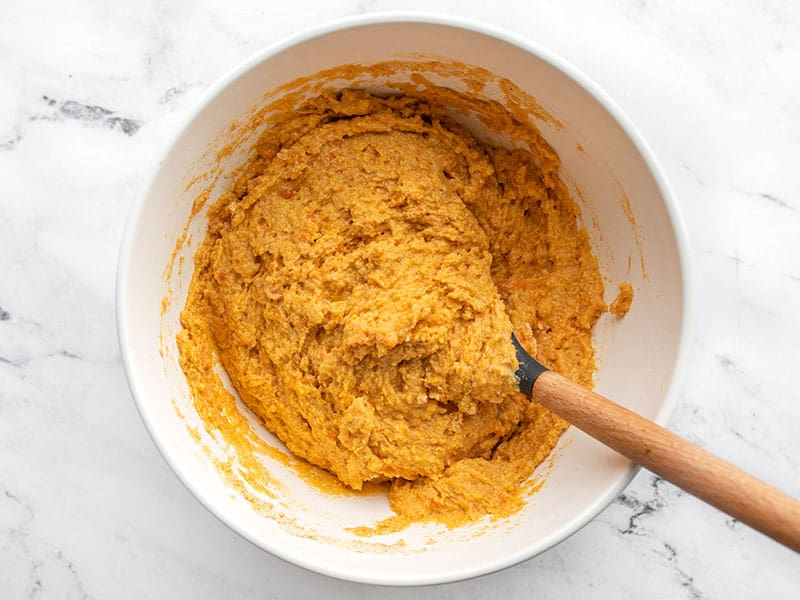 Pour the sweet potato mixture into the bowl with the mixed dry ingredients and stir them together just until mixed. It’s okay if it’s a bit lumpy, just don’t over mix it. The sweet potato cornbread batter will be fairly thick. 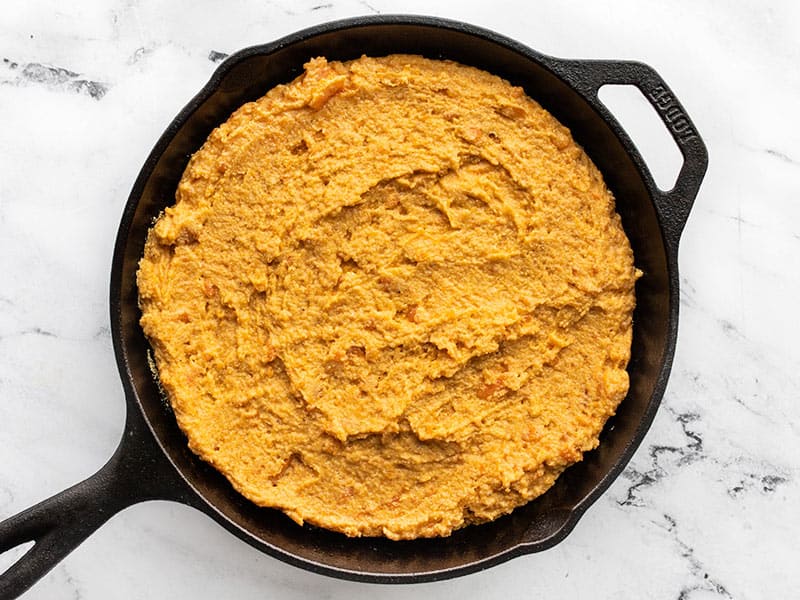 Carefully take the preheated skillet out of the oven, scoop the batter into it, then spread it around until it’s smooth on top. Return it to the oven and bake for 22-25 minutes. 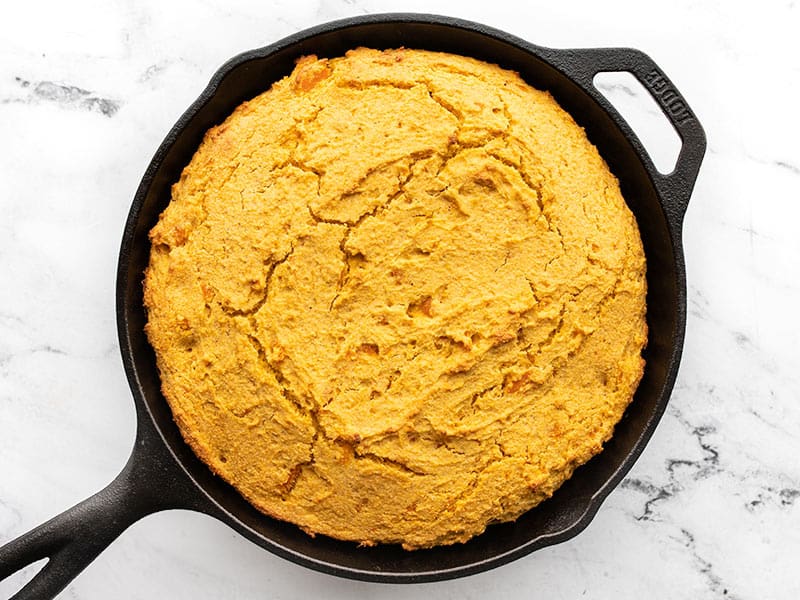 Or until it’s puffed in the center, golden brown on top, and cracked around the edges. Cut the sweet potato cornbread into eight pieces and enjoy! 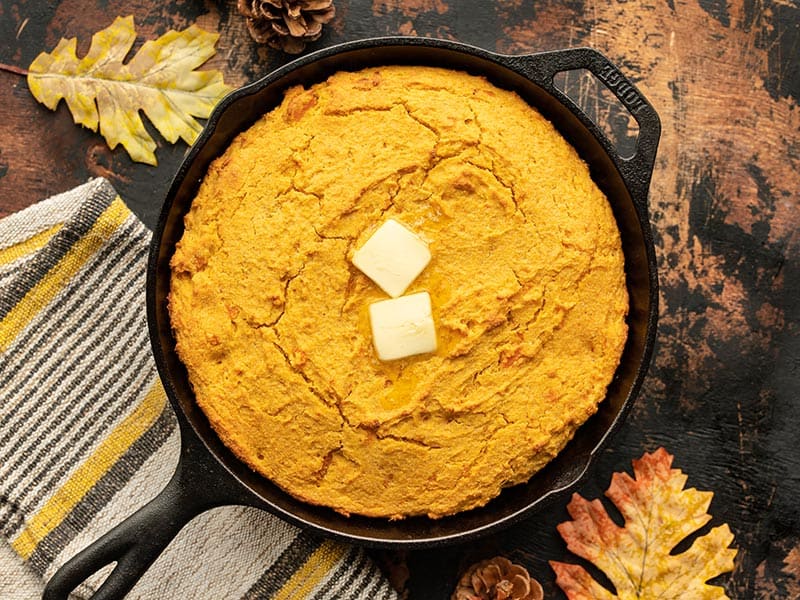 A little melted butter takes sweet potato cornbread to the next level. 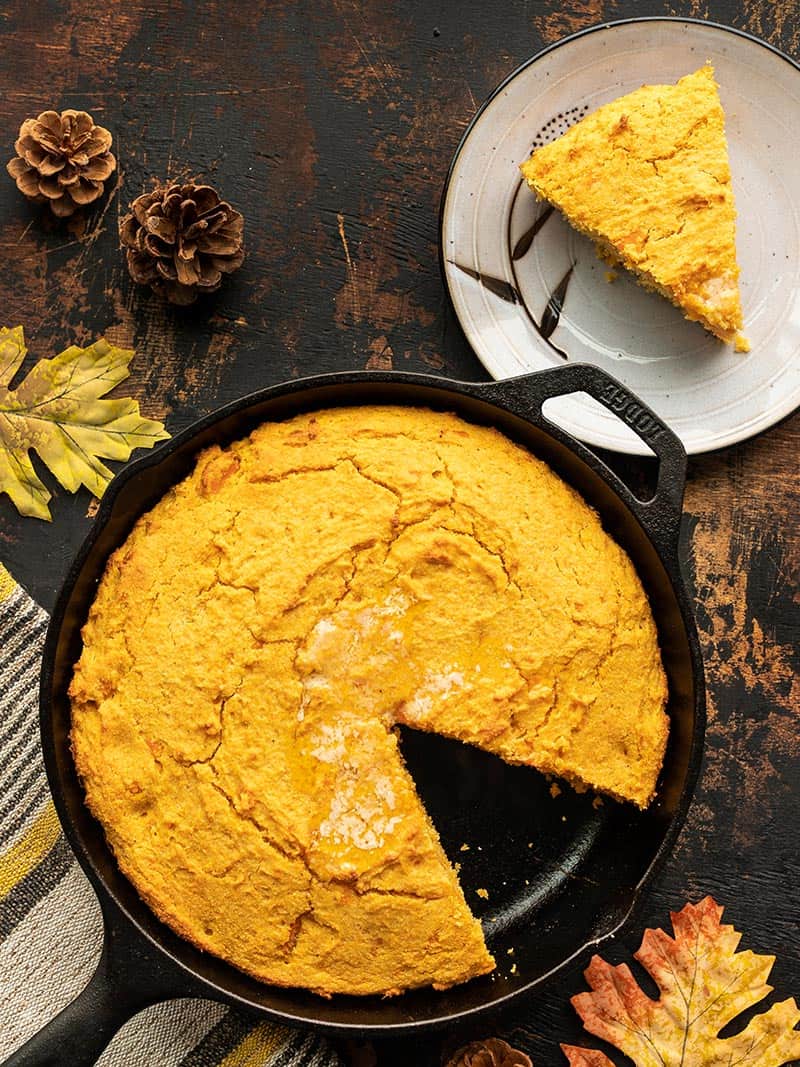 Ever since I made that Lemon Dill Tahini Dressing a couple weeks ago I’ve been using everything and anything as a vehicle to get it in my mouth. ? One of my favorite vehicles, by far, are potatoes. So this week I made these Crispy Potatoes with Lemon Dill Tahini Dressing as sort of a deconstructed potato salad. Just drizzle the dressing on top, sprinkle a few green onions in there, and DEVOUR. 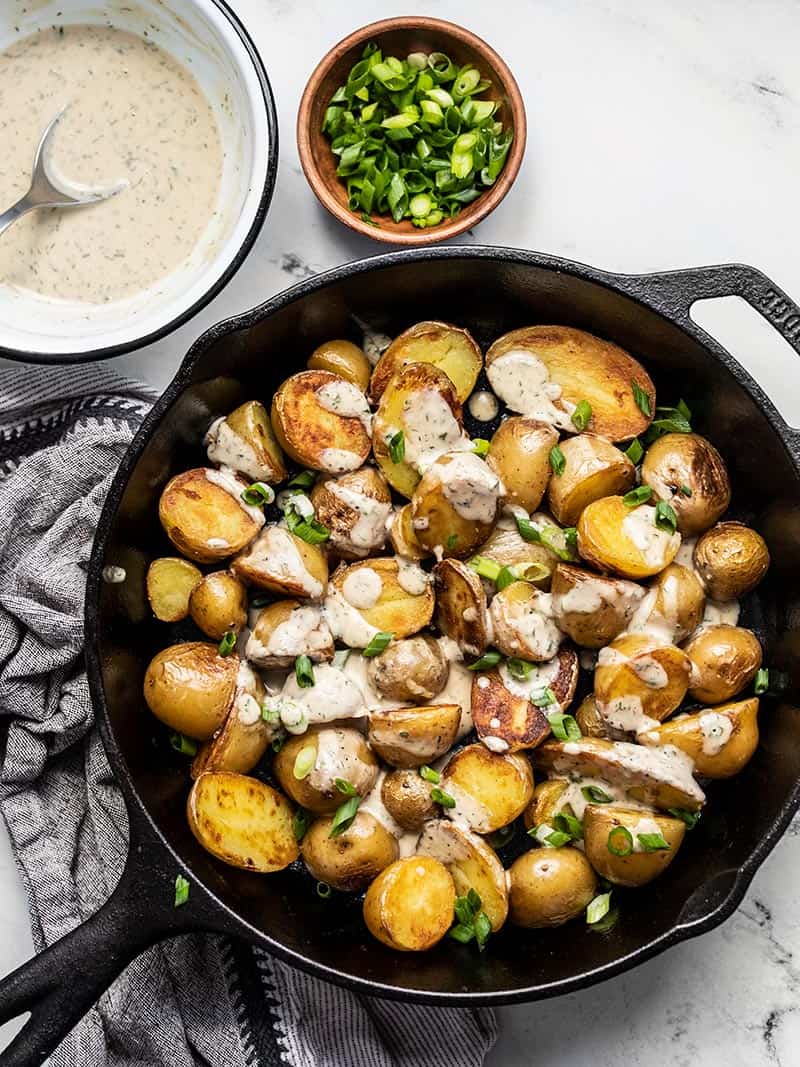 What to Serve with Crispy Potatoes with Lemon Dill Tahini Dressing

So, I totally just ate them right out of the skillet, but I know some (read: most) of you will want to know what kind of meal to pair this with, so here are a few suggestions. I think these Crispy Potatoes with Lemon Dill Tahini Dressing would be an awesome side to some Grilled Portobello Mushroom Burgers, Sun Dried Tomato, White Bean, and Kale Skillet, or Vegetarian French Dip Sandwiches. If you’re a meat eater, these potatoes would make a great side to just about any grilled or roasted meat.

How to Store Crispy Potatoes with Lemon Dill Tahini Dressing

These potatoes are undoubtably the best right after cooking, when they’re crispy. You’ll want to drizzle the dressing on just before eating because if left on too long the dressing will tend to soak into the potatoes. So, if you plan on storing some of these to eat as leftovers I suggest keeping the three components separate (potatoes, dressing, green onion). Reheat the potatoes in a skillet to crisp them up again, then add the dressing and green onions just before eating.

Do I have to use baby gold potatoes?

Nope! I just happen to be in love with these tasty little potato-lettes, so I was okay with paying the premium price for them. But if this type of potato doesn’t fit your budget you can use regular sized Yukon Gold Potatoes or red skinned potatoes. I like the Yukon Gold or red potatoes because they have a creamier texture than the slightly more grainy texture of russet. If using larger potatoes, simply dice them into large cubes before boiling. 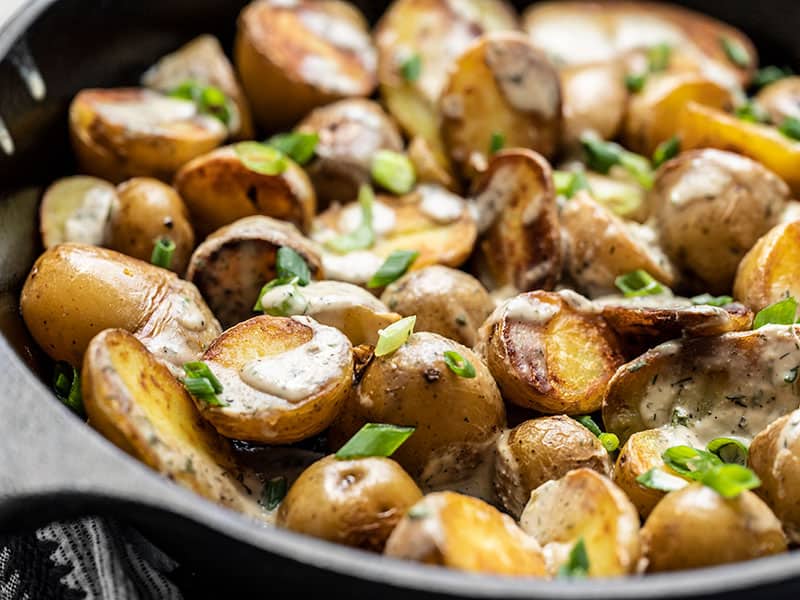 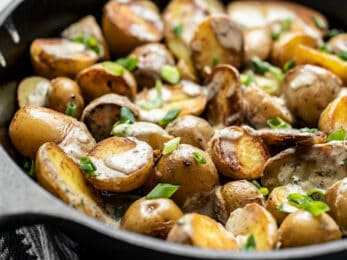 These Crispy Potatoes with Lemon Dill Tahini Dressing are like a deconstructed vegan potato salad, with a creamy homemade dressing.

*see the notes above the recipe for instructions on using other types of potatoes. 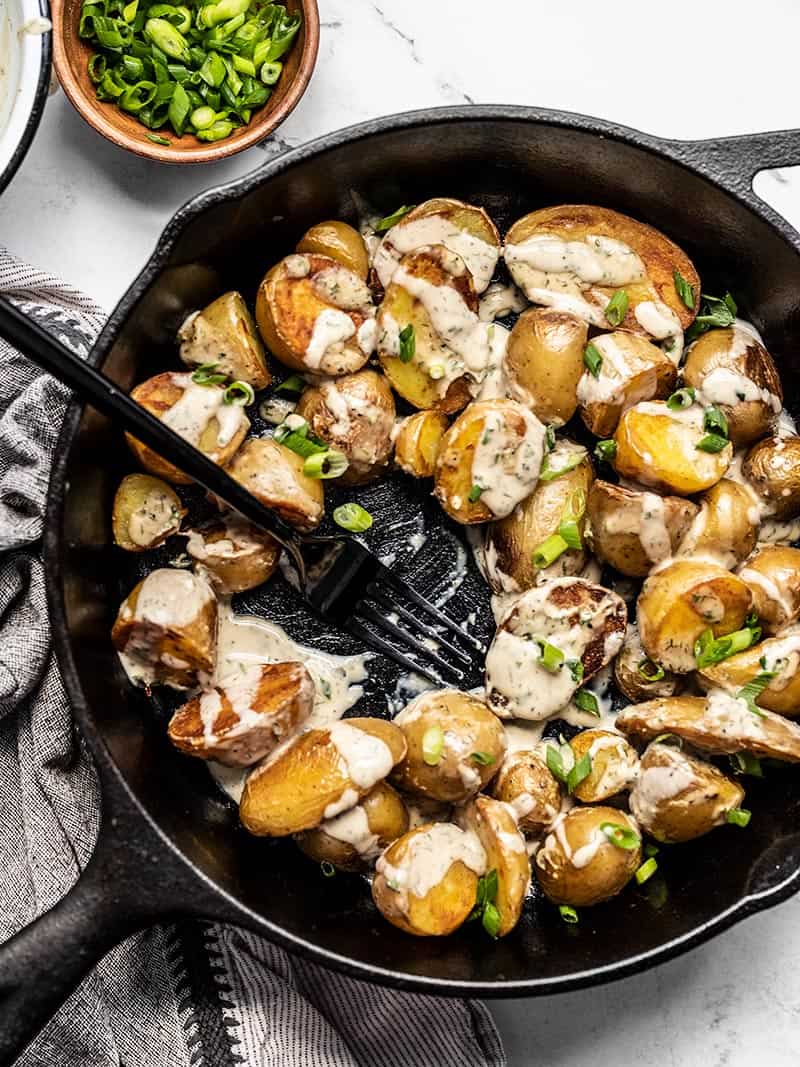 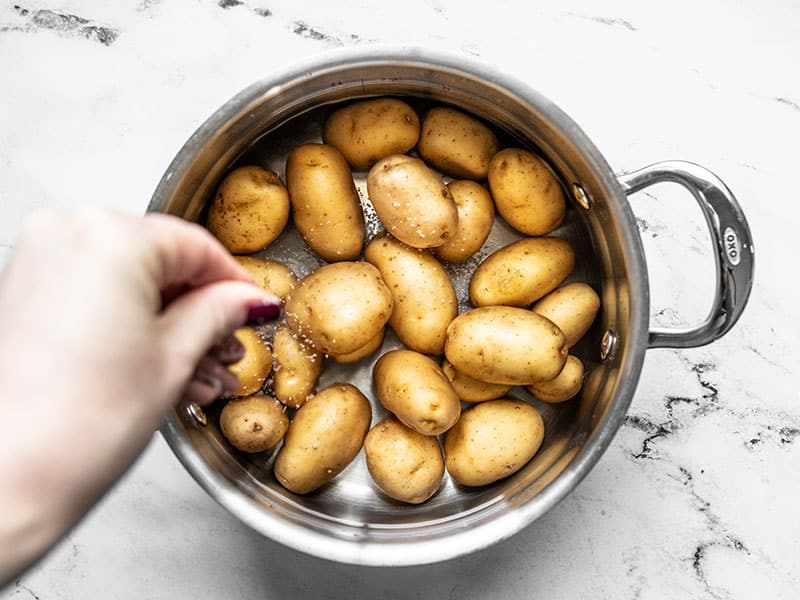 Add 1.5 lbs. baby potatoes, 1/4 tsp salt, and enough water to cover the potatoes by one inch to a pot. Place a lid on the pot, then turn the heat on to high, and allow the water to come up to a boil. Boil the potatoes until they are fork tender, about 8-10 minutes. 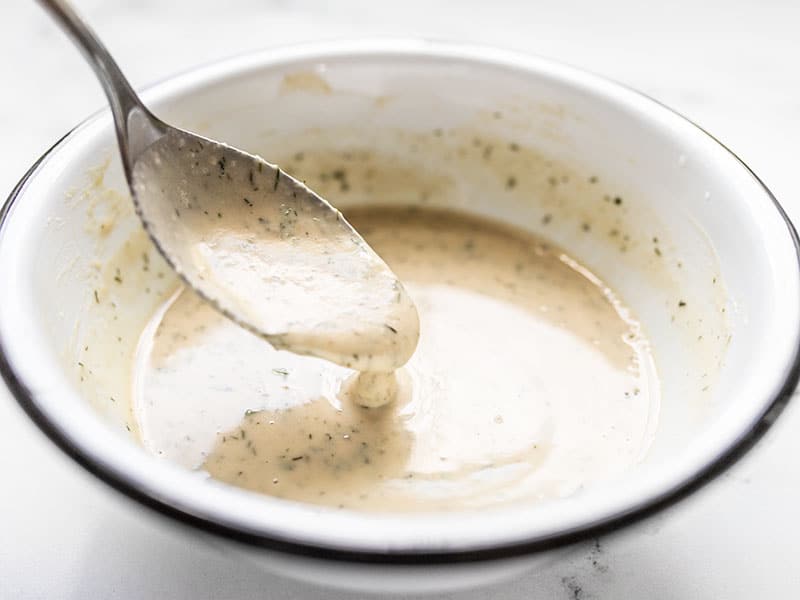 While the potatoes are boiling, make the lemon dill tahini dressing. Add 1/4 tsp garlic powder, 1/4 tsp onion powder, 1/2 tsp dried dill, 1/2 tsp dried parsley, 1/4 tsp salt, some freshly cracked pepper (about 10 cranks of a pepper mill), 1/4 cup tahini, 1/4 cup water, and 3 Tbsp lemon juice to a bowl. Whisk or stir until it is smooth. If your dressing is super runny, just pop it in the refrigerator and it will thicken up as it cools. 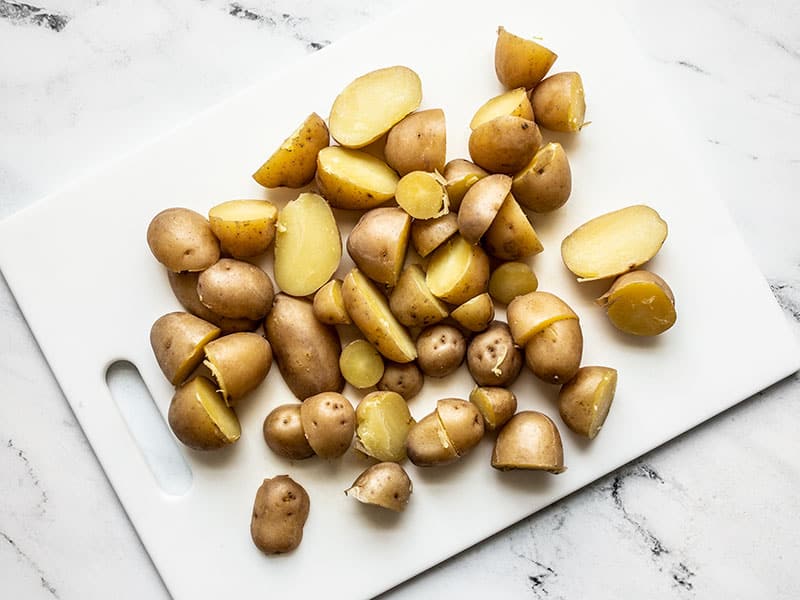 Once the potatoes are tender, drain them in a colander and let them cool for a few minutes, or just until they are cool enough to handle. Once slightly cooled, slice them in half. 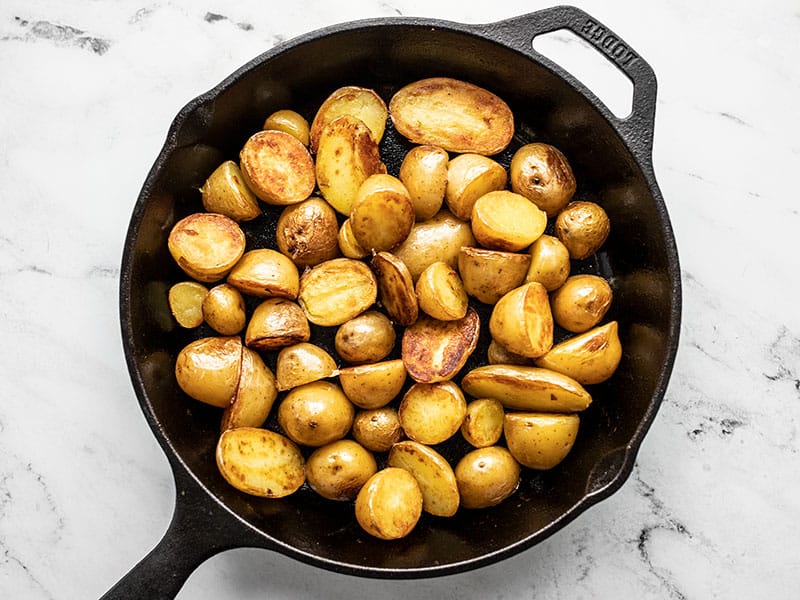 Add 2 Tbsp cooking oil to a non-stick skillet. I prefer cast iron for this one, and I’m using the 10″ Lodge cast iron skillet. Heat the skillet over medium-high. Once hot, add the potatoes and cook them until brown and crispy, about 10 minutes, stirring only occasionally. Remove the skillet from the heat. 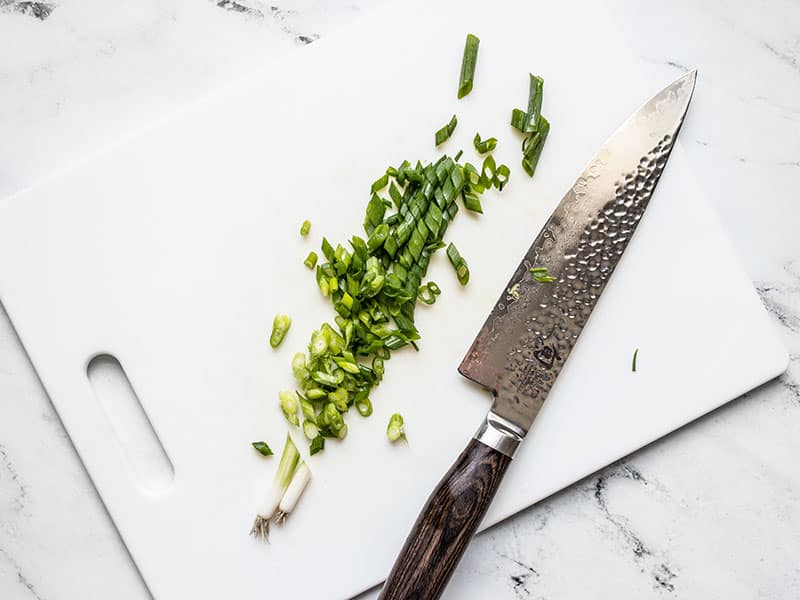 While the potatoes are frying, slice two green onions. 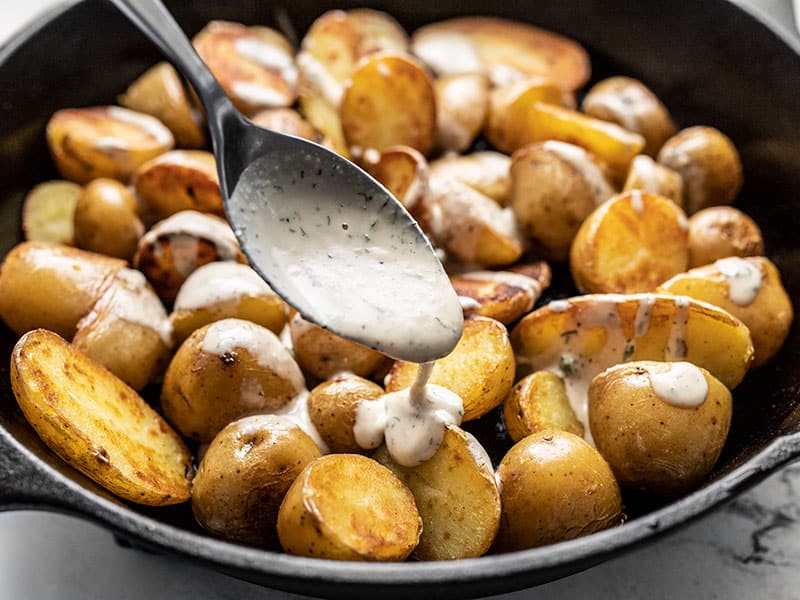 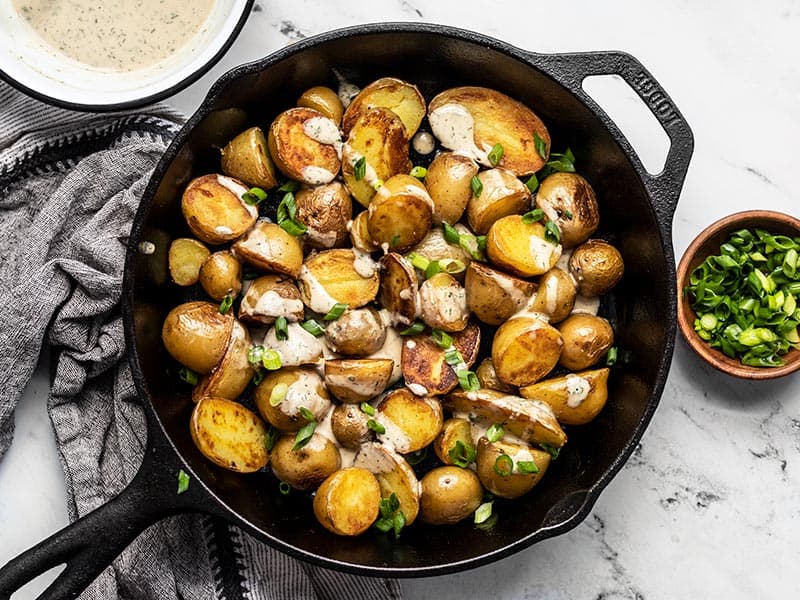