Sugar cookies are budget-friendly, simple to make, and a delicious way to make memories that will last a lifetime.

Sugar cookies are budget-friendly, simple to make, and a delicious way to create memories that will last a lifetime. Whipping up a batch of this sugar cookie recipe and spending the afternoon decorating them with family and friends is my favorite thing to do during the holidays.

How To Soften Butter

Perfectly softened butter will form an indentation when you gently press a finger into it—like play dough. Here are three ways to achieve this consistency:

Traditionally cookie cutters are used to shape sugar cookie dough. While metal cutters are the most popular, I prefer plastic cutters, as they don’t bend or rust. Of course, you don’t need to invest in cookie cutters to shape your dough. You can use the mouth of a glass or the ring of a mason jar lid, as we did here. If you want to create a different shape, draw it on paper, cut it out, and place it on the dough. Use a knife to trace the outline. Always cut dough that’s been rolled out to 1/4 inch thickness and chilled to create clean lines.

How To Fix Cookies That Have Lost Their Shape

If you open your oven to find that your cookies have lost their shape, it can be an easy fix. First, allow the cookies to cool on the sheet pan for a minute, then reshape them by pressing the cookie cutter into them and using a butter knife to separate the trimmings from the cookie. Work quickly; the more the cookie cools, the more likely it is to shatter. Don’t throw out those trimmings! They’re crispy and a total delight.

You can eat plain sugar cookies, but decorating them is always so much fun. Traditionally royal icing is dyed with food coloring and piped onto the cookies to decorate them. But if you prefer a simpler method, you can also garnish the cookies with a bit of icing, a sprinkle of cinnamon sugar, or a pinch of zest. They will still look and taste amazing. If you want to steer clear of food coloring, grate freeze-dried raspberries or blueberries into a powder and sprinkle them into the icing to create a vibrant pink or purple hue.

How To Make Royal Icing

Royal icing is a stiff white icing that’s dyed with food coloring and used to decorate pastries. It can be plain or flavored with vanilla extract, almond extract, lemon zest, or orange zest. When decorating cookies, there are three textures you should make:

Store sugar cookies in an air-tight container for up to a week at room temperature. You can also freeze them in a freezer-safe container, separated with layers of parchment or wax paper, for up to 3 months. Don’t refrigerate sugar cookies, as it can dry them out and dull their flavor. 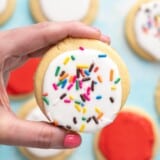 How to Make Sugar Cookies – Step by Step Photos

In a large bowl, use a hand mixer to whip the 12 tablespoons of softened butter & cup of sugar until fluffy.

Add the egg and the teaspoon of vanilla to the creamed butter and mix to incorporate.

In a separate bowl, mix the 2 cups of all-purpose flour and the 3/4 teaspoon of baking powder.

Place the dough between two sheets of parchment paper and roll the dough ¼ inch thick. Cool for thirty minutes in the fridge. Preheat your oven to 350°F.

This article is from Delicious Everyday.
For a dessert recipe that tastes like a cloud, you’ll want to give this Pineapple Angel Food Cake a whirl! All the classic flavors and textures of angel food cake, with a sweet, yet tart, addition of pine…

This article is from Delicious Everyday.

For a dessert recipe that tastes like a cloud, you’ll want to give this Pineapple Angel Food Cake a whirl! All the classic flavors and textures of angel food cake, with a sweet, yet tart, addition of pineapple. Top with pineapple chunks and whipped cream for the ultimate vegetarian dessert. I remember when I was...

END_OF_DOCUMENT_TOKEN_TO_BE_REPLACED

Snickerdoodles have always been one of my very favorite cookies. I have been baking and eating them since I was a kid. I love them because they are delicious and because of their name, snickerdoodles. Isn’t that such a fun cookie name? This is th… 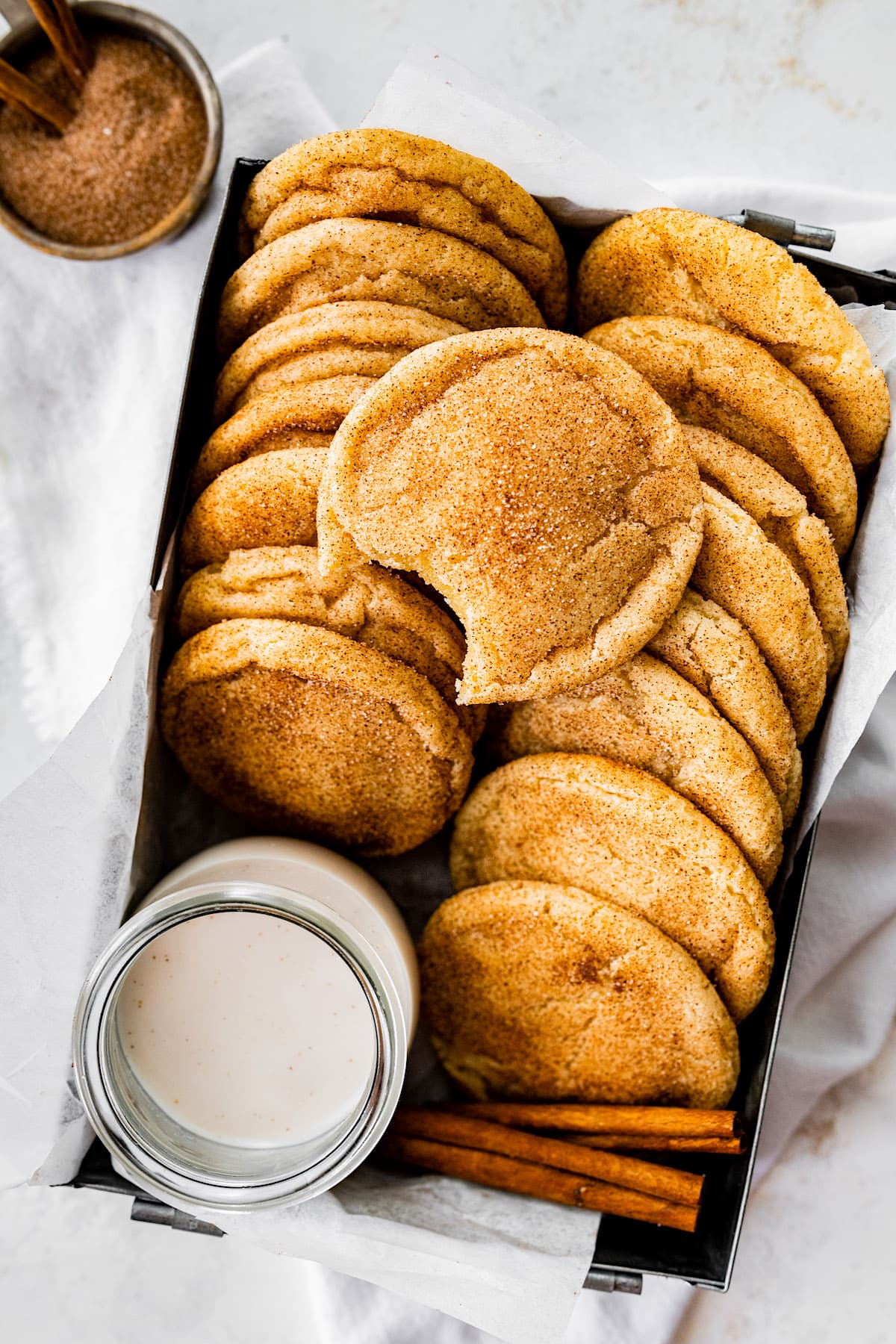 Snickerdoodles have always been one of my very favorite cookies. I have been baking and eating them since I was a kid. I love them because they are delicious and because of their name, snickerdoodles. Isn’t that such a fun cookie name? This is the BEST snickerdoodle recipe because the cookies are crisp around the… 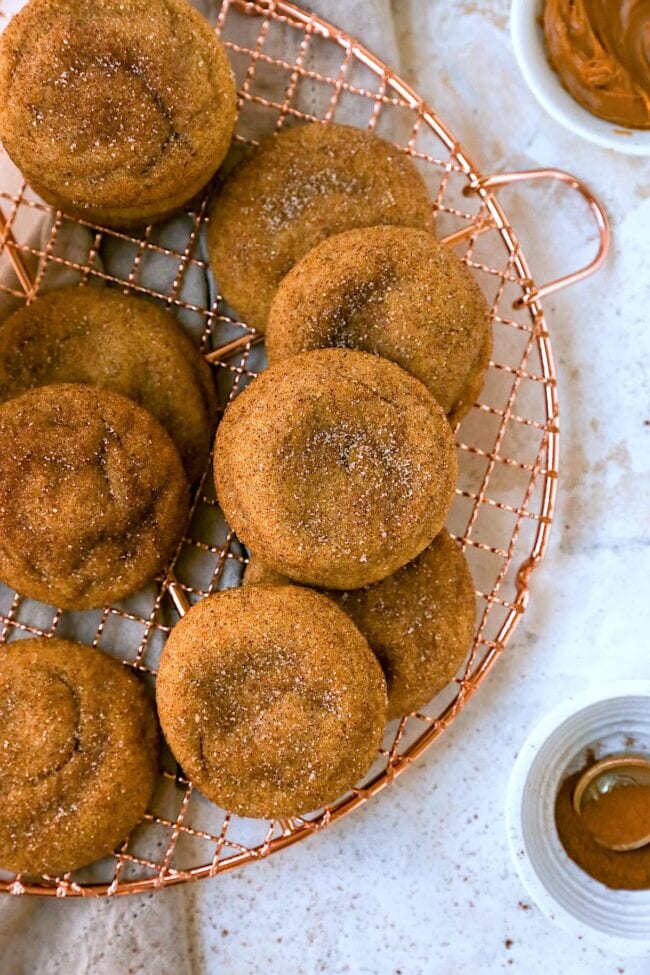 With as many beans as I eat, it’s about time I started using putting the aquafaba to good use. I’ve been playing around with aquafaba for the past couple of months and I think this Super Crunchy Oil Free Granola is my favorite use so far! The starchy bean water binds the granola into crunchy […]

With as many beans as I eat, it’s about time I started using putting the aquafaba to good use. I’ve been playing around with aquafaba for the past couple of months and I think this Super Crunchy Oil Free Granola is my favorite use so far! The starchy bean water binds the granola into crunchy clumps, without the use of excessive oils and sugars, like traditional granola. And no, the end product doesn’t smell or taste like beans. ?

Never heard of aquafaba? Scroll down for a little crash course… 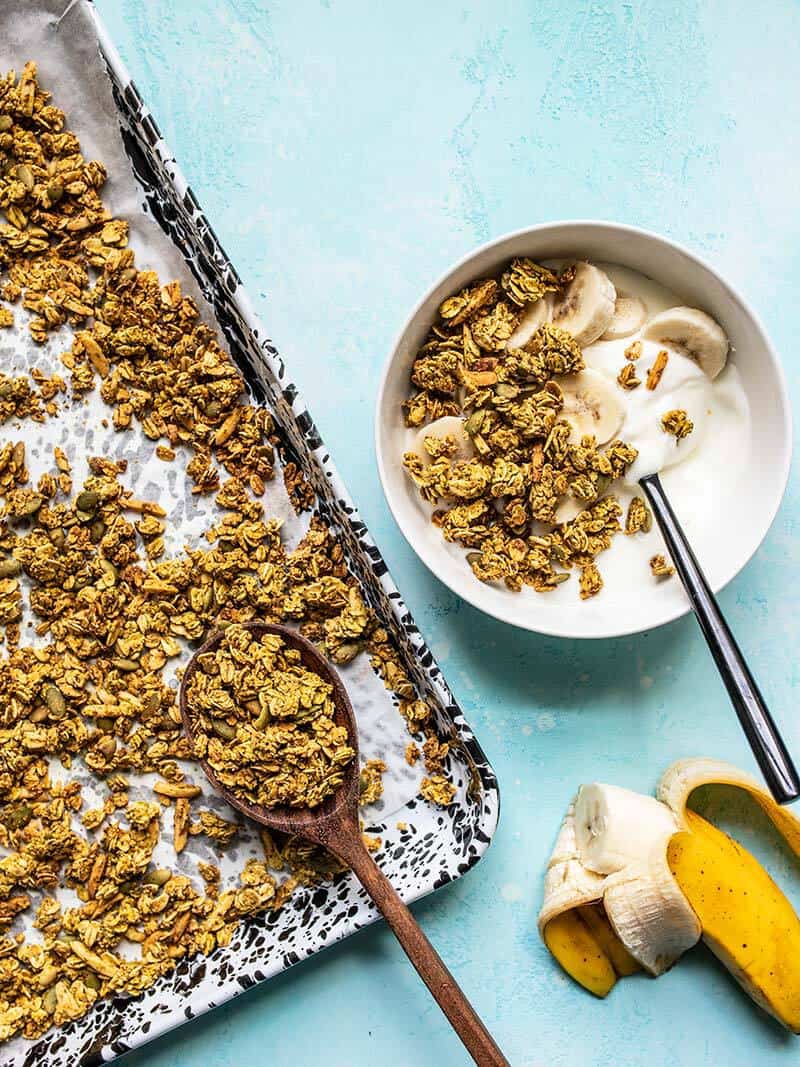 Aquafaba is the slightly goopy water that usually gets discarded from a can of beans. The soluble starches from the cooked beans give this strange liquid surprising properties that allow it to be whipped like egg whites and act as a binder in food. Absolute liquid gold for people looking for a vegan substitution for eggs! While it can’t be used as a sub for eggs in every recipe, it works for quite a few.

I suggest using the liquid from canned chickpeas over any other bean. Chickpea aquafaba is the most neutral, or has the least amount of color and flavor. Definitely stay away from black bean or kidney bean aquafaba, as they’ll be dark in color. I have used aquafaba from cannellini beans before, but chickpea aquafaba definitely has less flavor.

What is Cream of Tartar?

Cream of tartar, or tartaric acid, is an acid in powder form, and is a good ingredient to keep stashed in the back of your pantry. It has a few unique uses in the kitchen, including being the secret ingredient that turns baking soda into baking powder. In this granola recipe, cream of tartar is used to stabilize the aquafaba and make it easier to whip into a dense foam. Without a pinch of cream of tartar it can take up to ten minutes to properly whip aquafaba. With cream of tartar it takes only about three minutes. 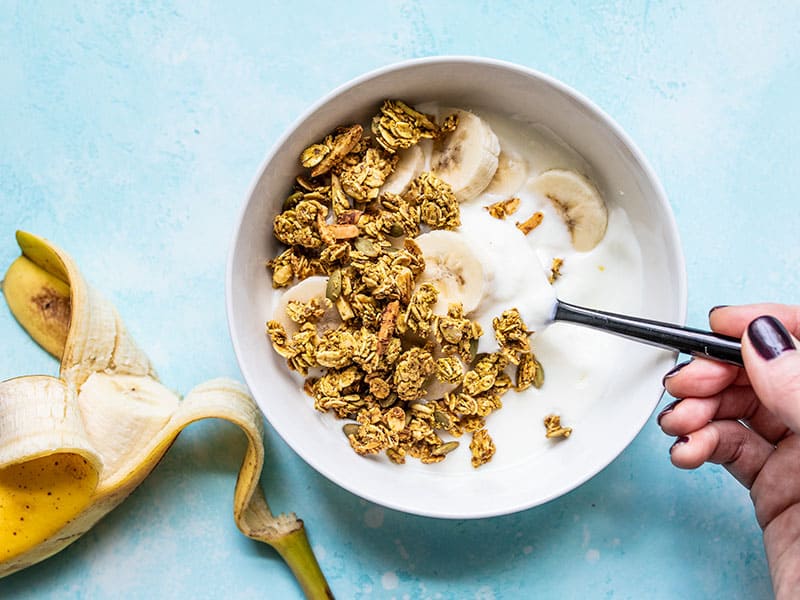 This recipe is super flexible and can be a great way to use up leftover dry goods in your pantry. The spice mix and the grains, nuts, and seeds, can all be swapped out to match your preferences.

When substituting the grains, nuts, and seeds in this recipe, just try to have about 3 cups total dry goods, in a ratio of about 2 cups grains to 1 cup nuts and seeds. Other nuts and seeds that you can use are: chia, sunflower, sesame, pecans, walnuts, or hemp.

I purposely made this Super Crunchy Oil Free Granola very low in sugar. You can increase the sugar amount to fit your taste buds (the uncooked granola is safe to taste). You can also substitute maple syrup for the brown sugar in this recipe, although it does make the mixture a bit more wet, resulting in a slightly longer baking time. 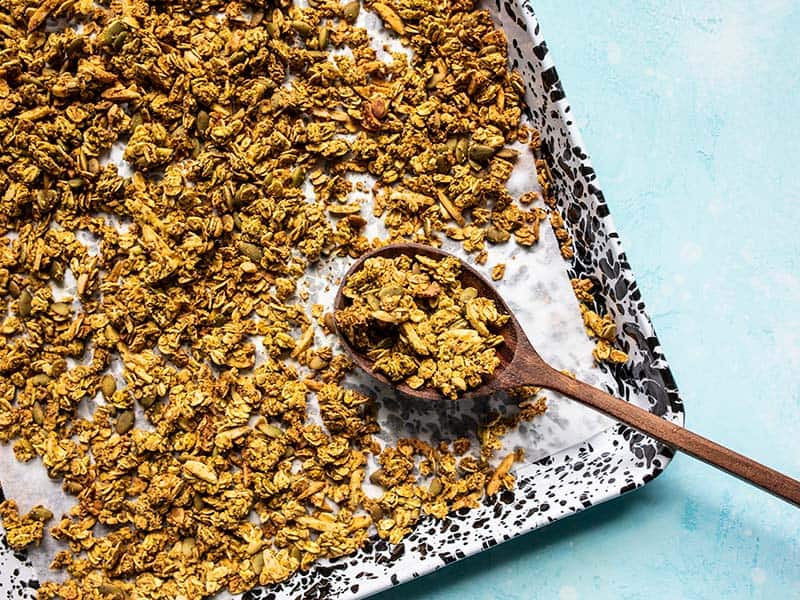 This black and white splatter baking sheet is from Roveandswig.com. 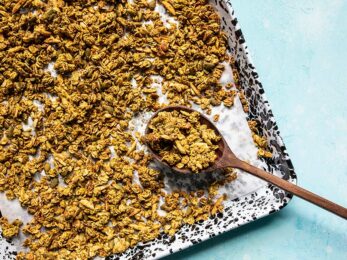 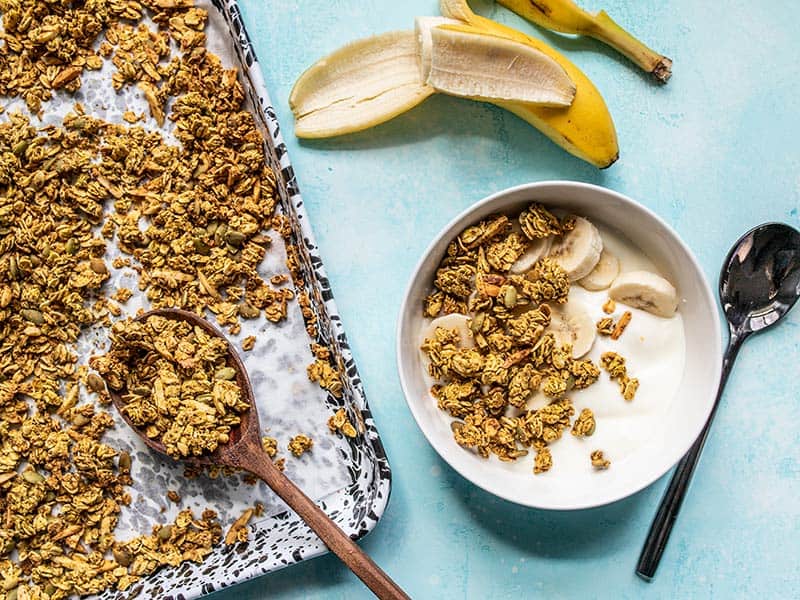 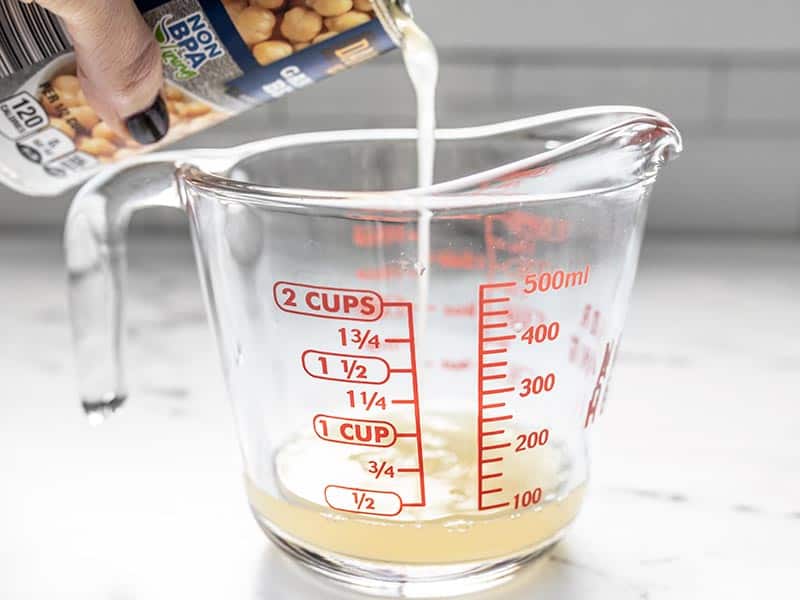 Preheat the oven to 350ºF. Pour the liquid from a can of chickpeas (aquafaba) into a measuring cup. You’ll need 1/2 cup of aquafaba. One 15oz. can of chickpeas usually has about 3/4 cup, so you should have plenty from one can. 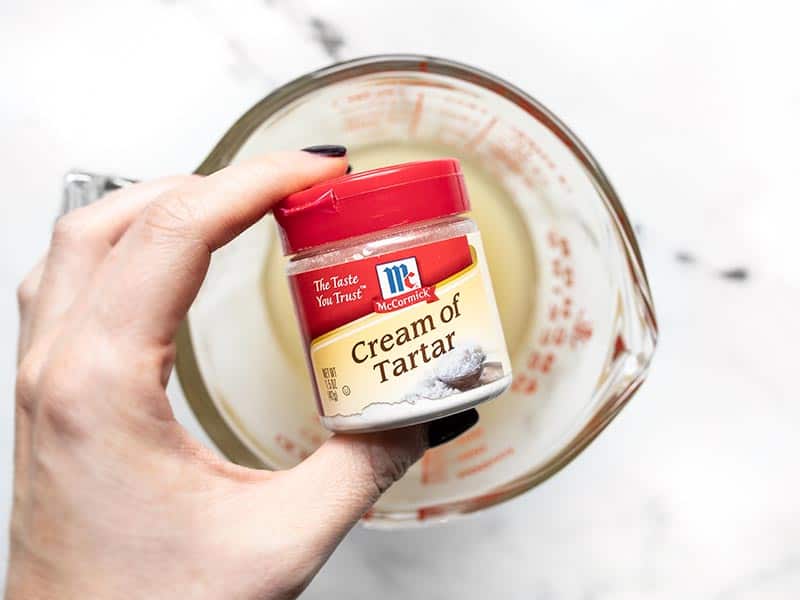 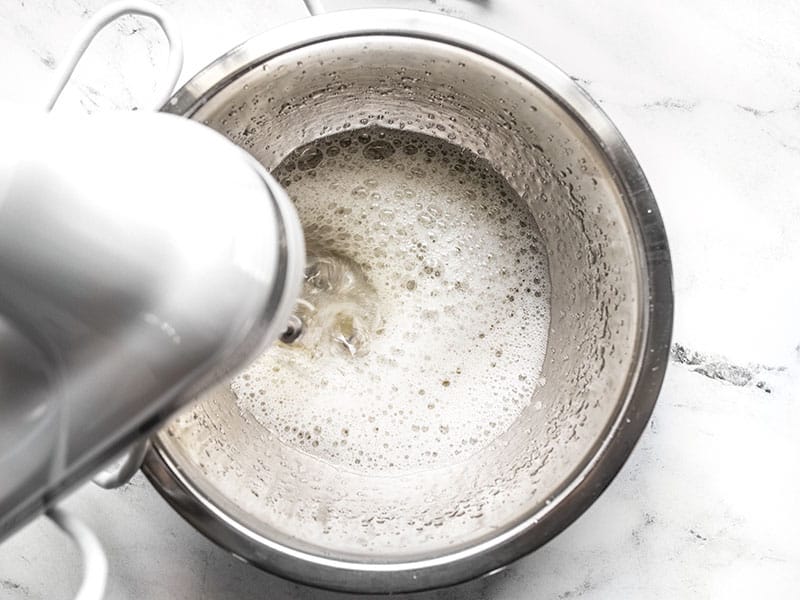 Use a hand mixer or a stand mixer to begin whipping the aquafaba. I wouldn’t suggest trying to do this one by hand. The aquafaba will look foamy at first, but if you keep going… 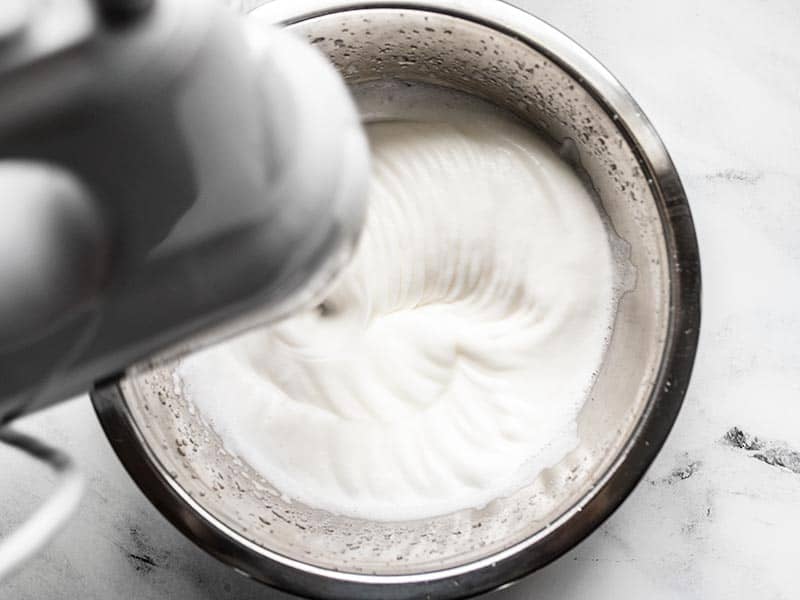 Eventually it will whip into a creamy foam. It’s done when the beaters begin to leave a trail in the foam, like in the photo above. 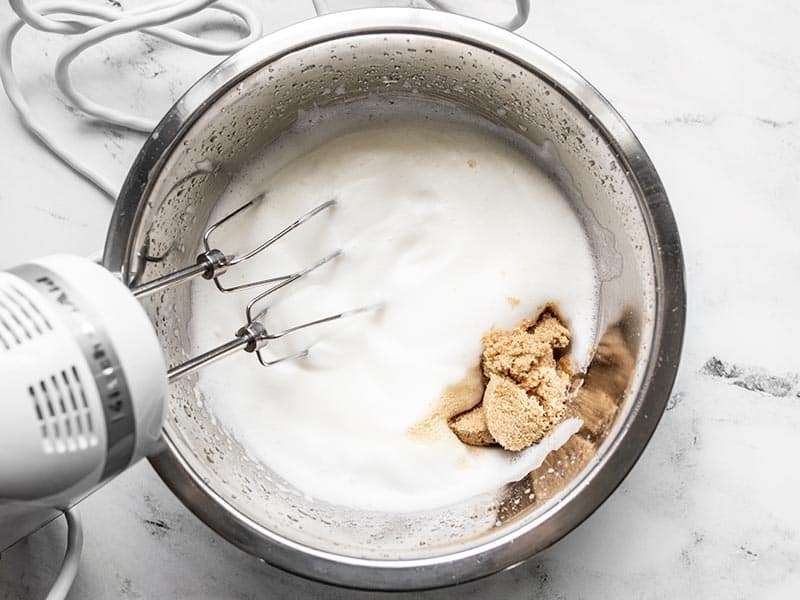 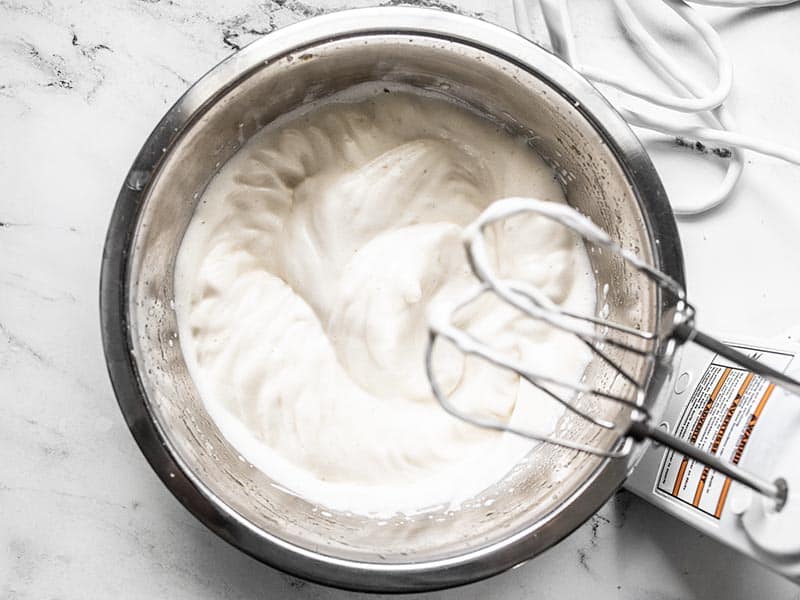 Whip for another 30 seconds or just until the brown sugar is dissolved into the foam. 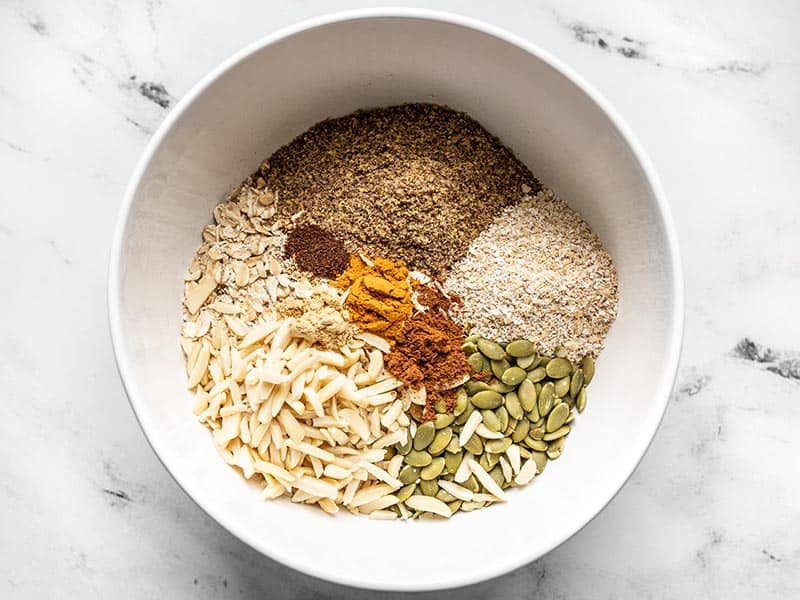 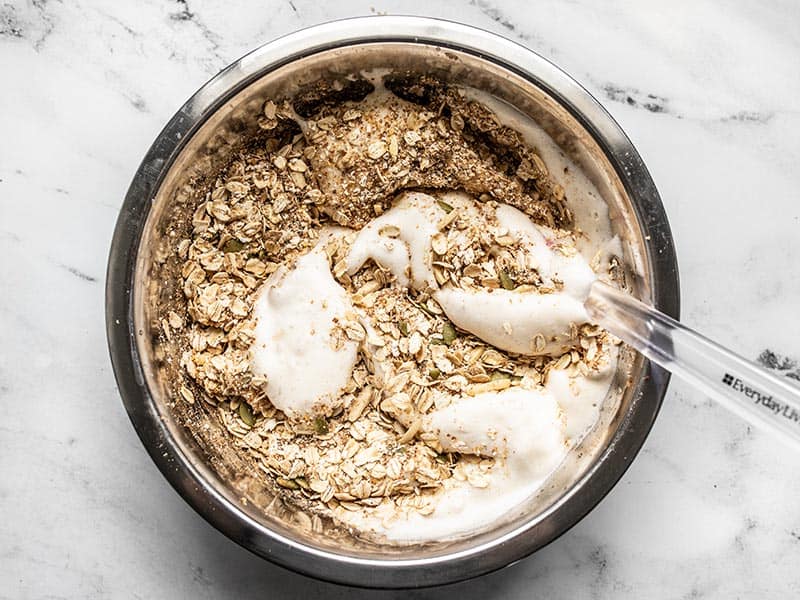 Add the dry ingredients to the bowl of whipped aquafaba and stir them together. 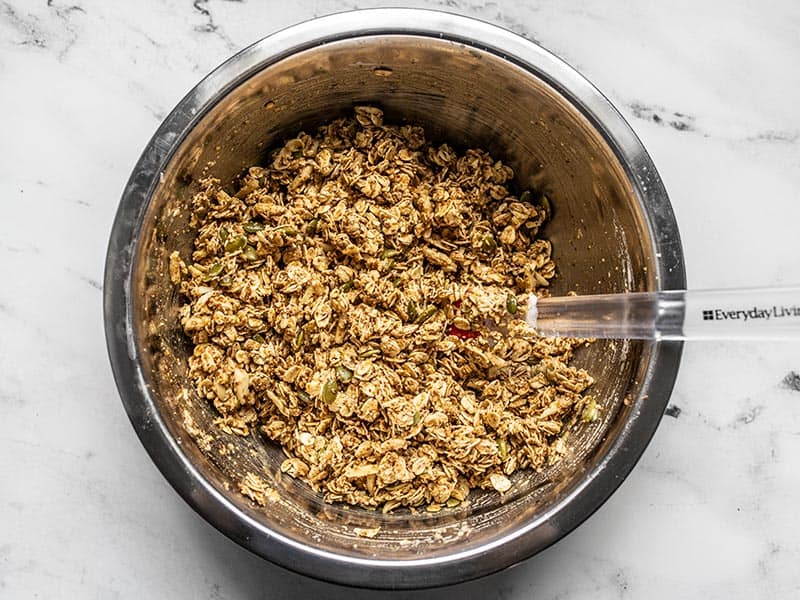 Stir until everything is saturated and slightly clumpy. 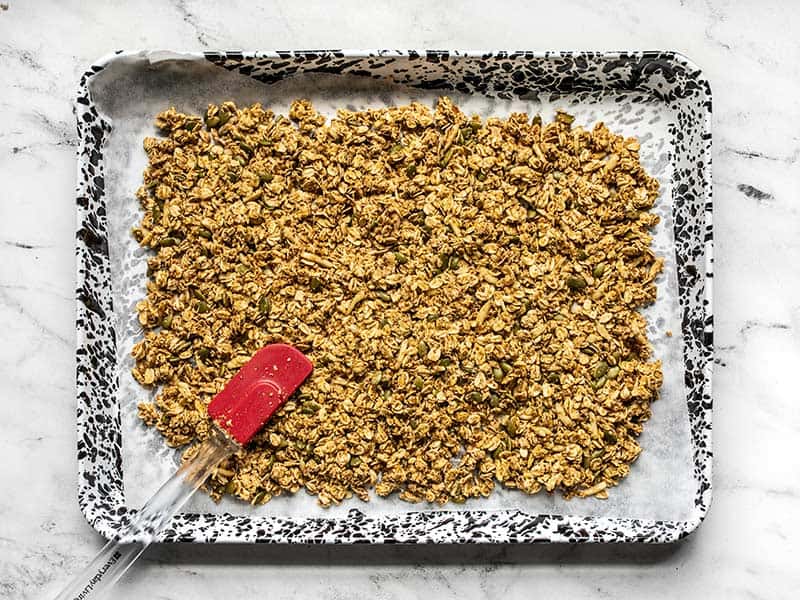 Line a large baking sheet with parchment, then spread the granola mixture over the surface into a single even layer. BTW, this is a Crow Canyon Enamelware Rectangular Tray from Roveandswig.com. 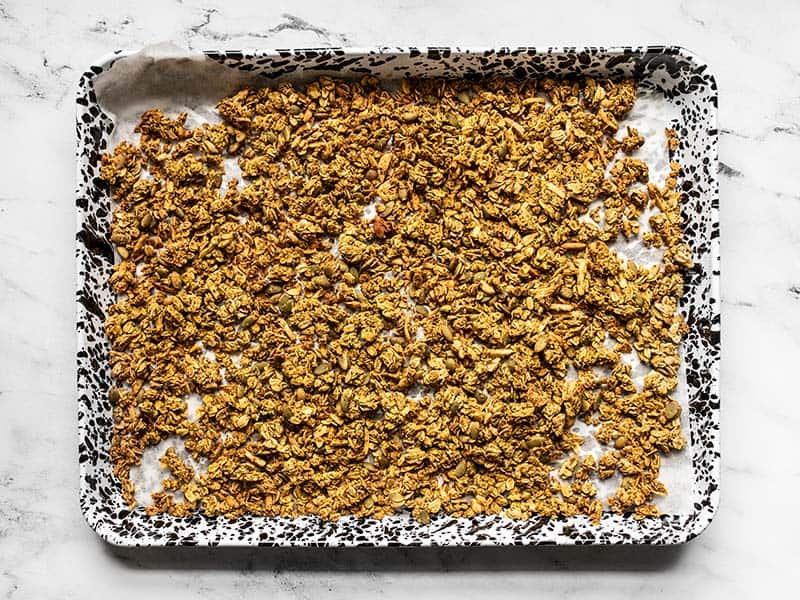 Bake the granola in the preheated 350ºF oven for 20 minutes, then give it a good stir. Bake for 10 more minutes and stir again. Then bake for a final 5 minutes, or until the granola is dry and it is deeply golden brown on the edges. Ovens can vary, so keep a close eye on it for those final 10 minutes or so. 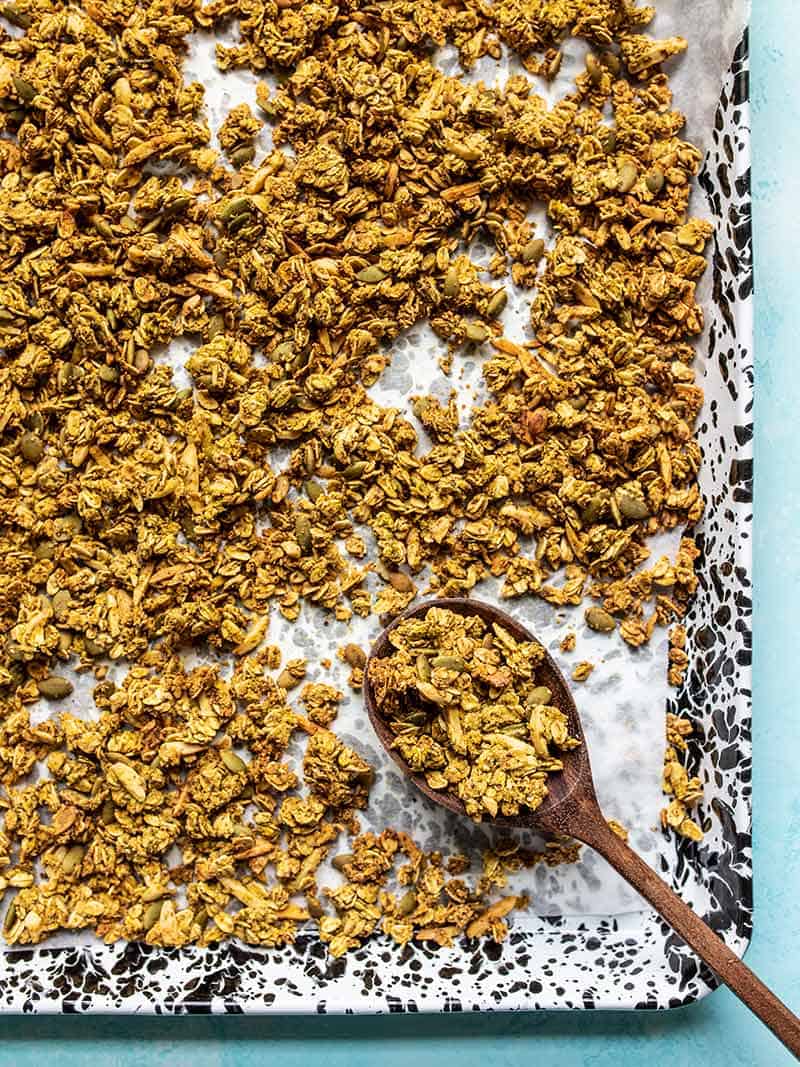 Let the granola cool completely, then store it in an air-tight container at room temperature.