This vegan tacos recipe stars a flavor-bursting taco meat with classic toppings like pico and lettuce. An easy vegan dinner…

This vegan tacos recipe stars a flavor-bursting taco meat with classic toppings like pico and lettuce. An easy vegan dinner in 30 minutes!

It’s easy to resolve to eat more plant-based healthy dinners, but actually doing it is another matter entirely. Here’s one way to make it mega-delicious: this Vegan Tacos Recipe! There are lots of ways to make a vegan taco, but this one is our favorite. It’s filled with hearty, spiced walnut taco meat that tastes remarkably similar to the real thing. Add refried beans, your favorite classic toppings, and dollop with a creamy, spicy sauce. These were a major hit at our house. Eating vegan dinners never tasted so good!

There are lots of plant-based meat substitutes available these days: which speeds up the prep of these vegan tacos. But many brands can have additives and odd ingredients, and aren’t all that different from the processed food many home cooks like to avoid. So we like to make our own! Walnut taco meat might sound a little odd: until you try it for the first time. You’ll be sold, one bite in! Here are the basic steps (or jump right to the recipe):

Once you’ve got the taco meat, all you need are the taco toppings! We wanted this vegan tacos recipe to mimic a classic ground beef taco, with toppings to match. So we’ve kept everything pretty classic! Here are our must-have toppings, and a few other ideas for getting creative:

Sometimes when we’re making tacos, making a separate sauce feels like too much effort with all the work on the toppings. But in my opinion, the sauce is what ties it together! Vegan sauces are difficult because you can’t rely on the richness of dairy. But there are a few great options to make a killer sauce:

This vegan tacos recipe is a take on a classic ground beef taco. But there are so many different ways to make a vegan taco! Here are some favorites: 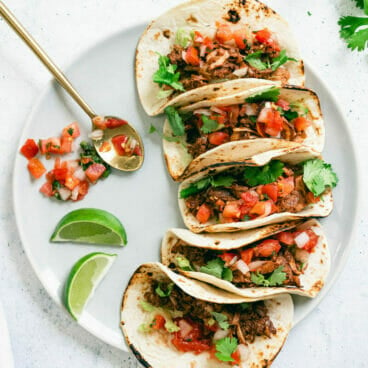 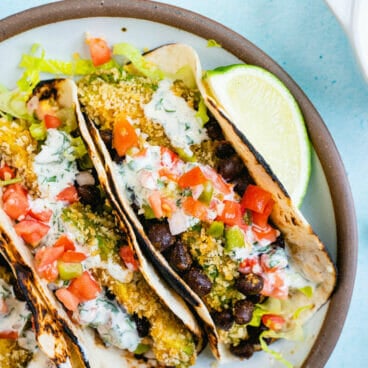 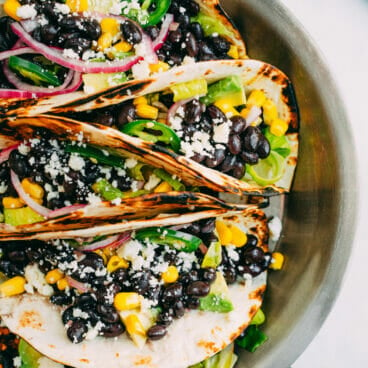 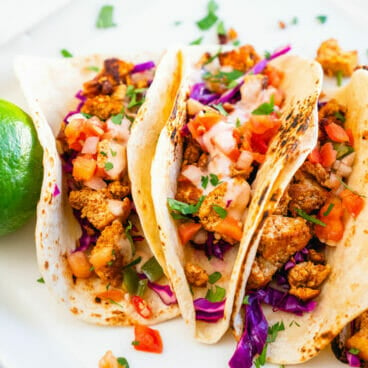 This vegan tacos recipe is…

This vegan tacos recipe stars a flavor-bursting taco meat with classic toppings like pico and lettuce. An easy vegan dinner in 30 minutes!

For the vegan taco meat

For the vegan tacos

*To make a smaller amount or reduce the calories, it also works with 1 cup walnuts and same amount of mushrooms. Reduce the kosher salt by ¼ teaspoon and then add more to taste. You can also substitute plant-based taco meat to speed up the recipe; here’s some notes on a favorite brand of ours.