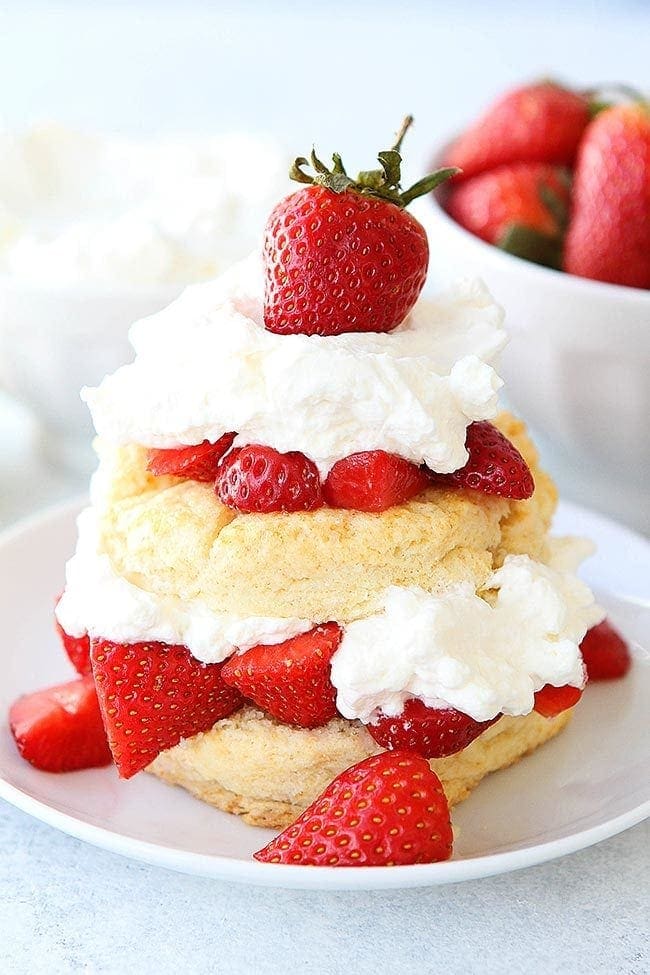 I’m calling this the summer of the strawberry shortcake trifle. If you’ve been following my week in the life posts, then you know that this is basically the YEAR of the trifle for me. Not only the summer. They are just so good. They taste like 1995 is the best way possible. So nostalgic and […]

I’m calling this the summer of the strawberry shortcake trifle. 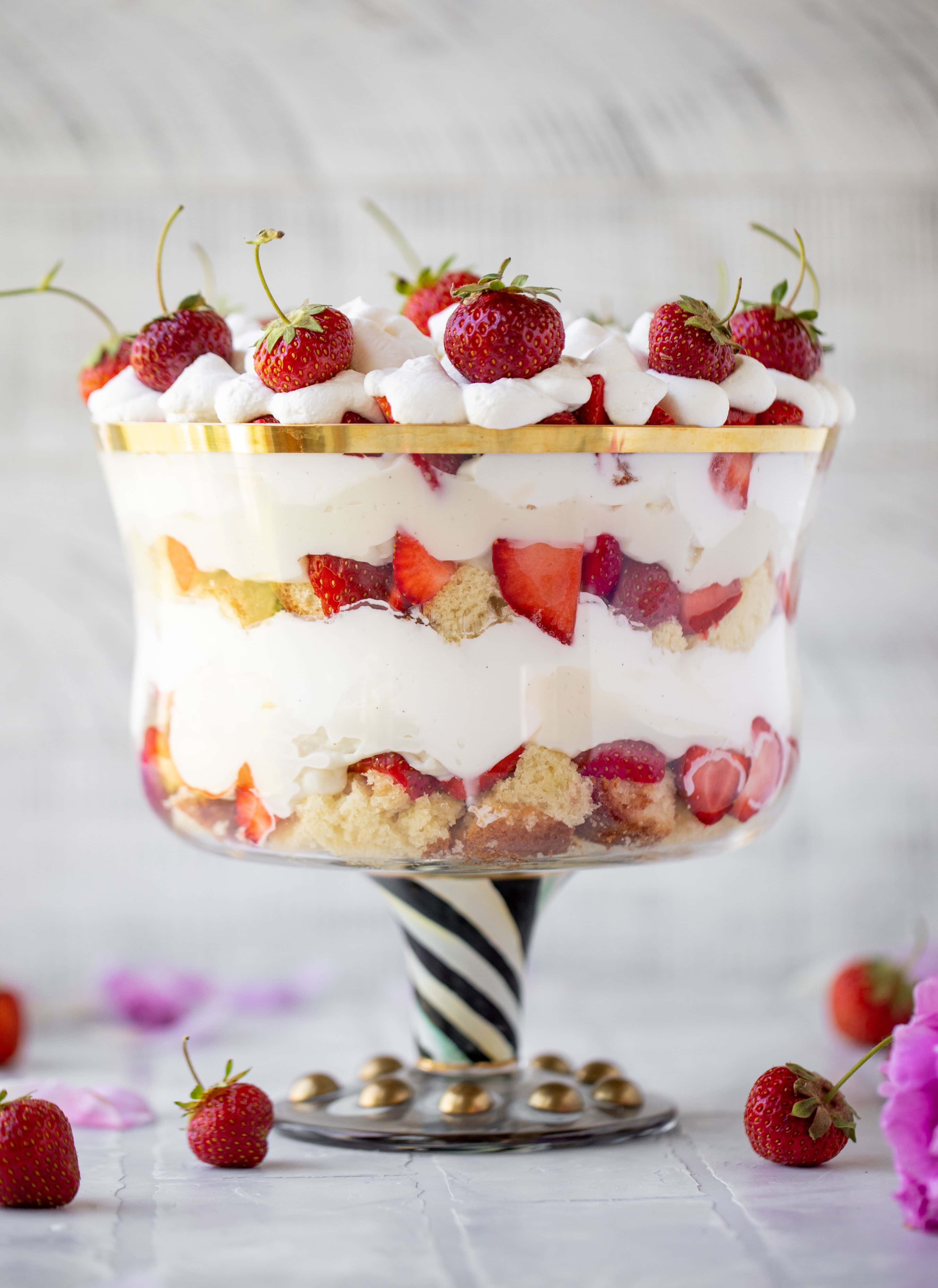 If you’ve been following my week in the life posts, then you know that this is basically the YEAR of the trifle for me. Not only the summer. They are just so good. They taste like 1995 is the best way possible. So nostalgic and wonderful, which is exactly what we all want and need while quarantined. Right?!

Also. I’ve wanted to make a strawberry shortcake cake for months. I was waiting until strawberries came in season, and then my sister-in-law made the most amazing berry trifle over memorial day weekend. And I couldn’t stop thinking about it. So this is how I meshed the two! I was crazy over it.

So naturally, I want all the strawberry shortcake recipes. Because if I haven’t screamed it from the rooftops enough, strawberries are my favorite fruit and they are divine when in season. 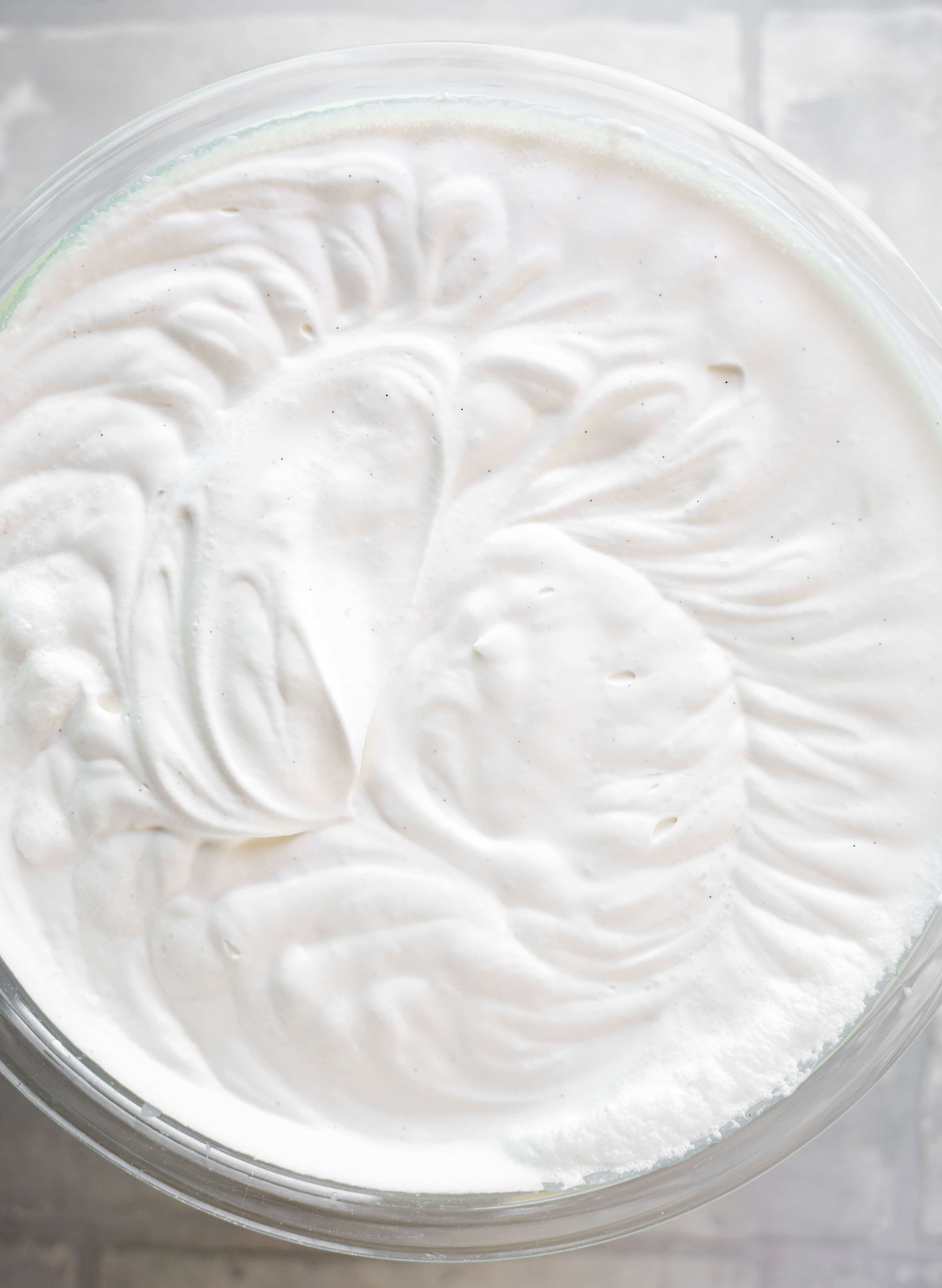 The best part of a trifle is that you can use all homemade ingredients or store bought in a pinch.

The past few weeks, I’ve done it both ways. So here are my thoughts!

I highly suggest buying the pound cake. Store bought pound cake is pretty darn good and if it’s not, it will be blanketed with vanilla pudding and whipped cream. I’ve also made it the “city girl trifle” way, which is where you make a syrup with orange liqueur and and sugar and then brush it over the cake. Wowza it’s good. It’s a great way to save store bought cake too.

I’ve made both boxed pudding and homemade pudding. This version has homemade vanilla bean pudding and it’s incredible. Silky but thick, rich but light at the same time. Tastes like heaven! I also always make my own whipped cream. And I tend to add vanilla extract or vanilla bean paste to it, but no sweetener or sugar. I love it this way because the hint of vanilla is so… pure. Not sugary sweet or fake. It also cuts the sweetness of the pudding and cake.

My favorite thing about this treat is that the strawberries are the sweetest part. YES. Perfectly juicy and sweet when in season – they almost taste like candy. Folded into the whipped cream and pudding with bits of the fluffy cake… OMG.

I don’t even know how to describe it!

It’s so summery. So fresh. So wonderful. 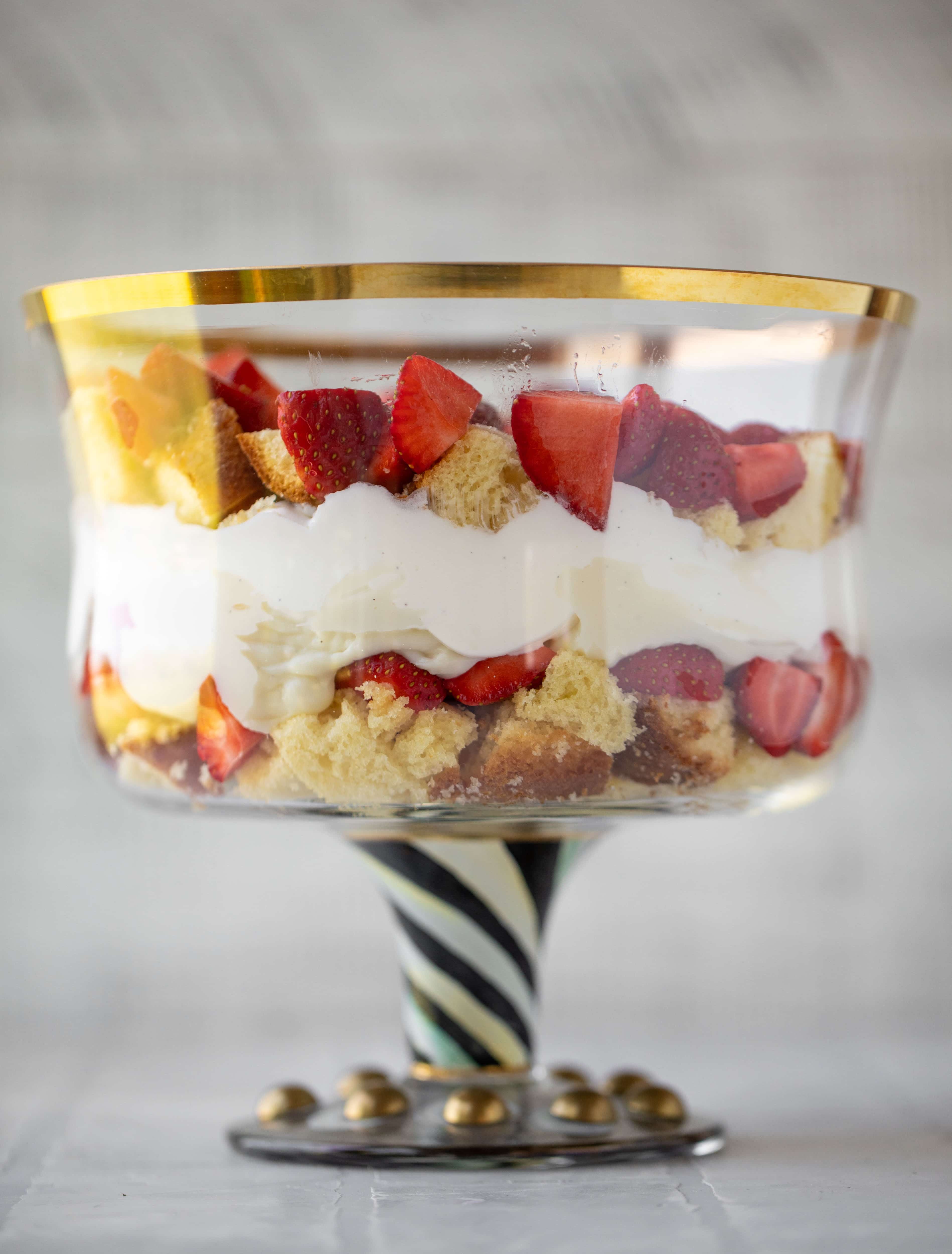 Of course – you can do this with any type of berry! You can also do a fun mix of berries for a whole red, white and blue theme. You can throw this together in MINUTES if you use store bought ingredients. If you make your own whipped cream, you can still throw it together pretty quickly. And it’s looks so fancy.

If you don’t have a trifle dish, use a large glass bowl. Or make individual trifle parfaits in glasses. It’s so easy. It’s such a crowd pleaser and everyone flips over it. Especially because it’s 2020 and we all forgot how much we love a good trifle. It’s the best feeling to serve a messy dessert.

Strawberry shortcake marks the start of summer around here. And why make it with store-bought mix if it’s 100% more delicious homemade? Here’s our classic strawberry shortcake recipe. It’s got tender, biscuit-like shortcakes, juicy sweet berries, and fluffy, homemade whipped cream. It’s so ridiculously good, it’s perfect for special occasions of all kinds: cookouts, patio parties, birthdays, and anytime you come across a load of ripe, beautiful berries. Here’s how to make it!

How to make strawberry shortcake: 3 steps!

There are three main skills you’ll learn in making strawberry shortcake, which we’ll cover below:

Baking the shortcakes: some tips

The type of shortcake in strawberry shortcake varies based on the recipe. Some you’ll find are more spongy, some light and airy. This version is flaky and biscuity: it’s a sweet version of our Homemade Biscuits. But instead of rolling and folding them several times to create layers, we’ve simplified the process. These are like a combination of a layered biscuit and a drop biscuit. Here are a few tips for making these shortcakes:

Can you make strawberry shortcakes in advance? These are best the day of, so they have a crispy on the outside and tender on the inside texture.

What if you don’t have a biscuit cutter?

If you don’t have a biscuit cutter for the strawberry shortcakes, here are a few ideas on how to cut the biscuits:

How to macerate strawberries

What does macerate mean? To macerate is to soften food by sitting in a liquid. With fruit and berries, you can simply mix them with sugar and let them sit. As they sit, the sugar extracts the juices from the berries, making a natural sauce with the sugar. I remember my mother doing this in the summer when I was growing up.

All you have to do is slice the berries and mix them with sugar: you don’t even have to measure quantities (or use the quantities in the recipe below). Here are a few notes about macerating the strawberries for strawberry shortcake:

Homemade whipped cream: it’s a must!

You could use store-bought whipped cream for strawberry shortcake…but if you’ve come this far, why not make homemade? Homemade whipped cream is fluffier, richer and creamier than anything you can get at the store. The recipe we’ve been making for years is this Homemade Whipped Cream. Go to that post for all our tips and tricks, but here are a fe w notes:

Ripe berries are a must for strawberry shortcake!

As always, the quality of the ingredients is key. For a summer symphony like strawberry shortcake, you absolutely must have the ripest berries you can find. Grab local strawberries if you can: their flavor is sweet and pure summer. The first time I had a bite of a local strawberry, my mind was blown. The nuance of the flavor is simply magical.

This strawberry shortcake recipe is…

*Our favorite twist is to use orange zest for the biscuits (in that case you can use orange juice for the strawberries).

Who doesn’t love the sweet flavor of strawberry? Here are a few more top notch strawberry recipes to add to your collection:

It was definitely mercury in retrograde recently when I got a phone call at 8:20pm, while we were having dinner at home, from a restaurant I’d reserved a table at, asking if we were showing up for our 8pm reservation. I was sure I had reserved for the following night, but – nope – I erred and our reservation was for that evening. (Fortunately, the… 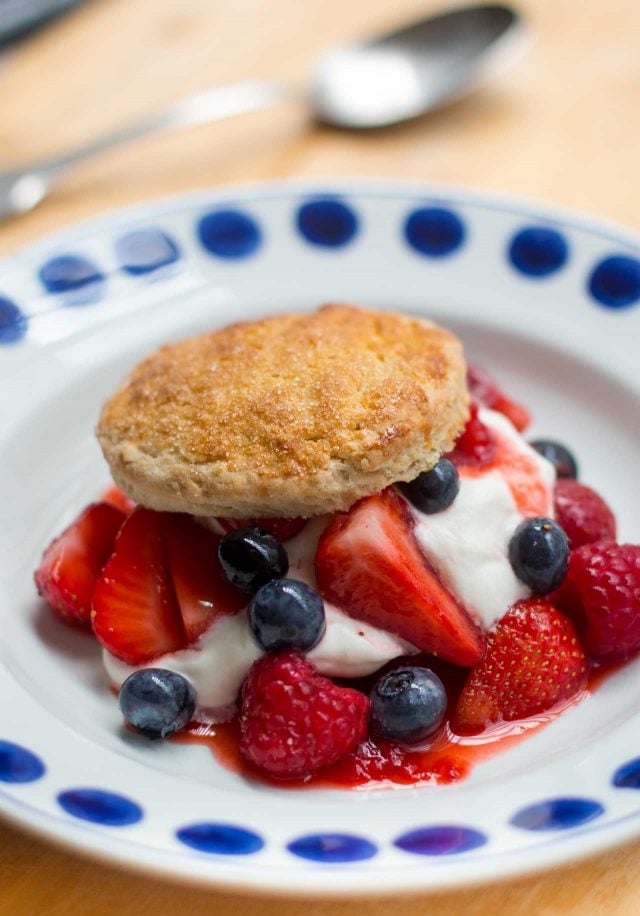 It was definitely mercury in retrograde recently when I got a phone call at 8:20pm, while we were having dinner at home, from a restaurant I’d reserved a table at, asking if we were showing up for our 8pm reservation. I was sure I had reserved for the following night, but – nope – I erred and our reservation was for that evening. (Fortunately, the restaurant has a steady walk-in crowd so the table didn’t sit empty. Still, I felt terrible.) We did go the next night, but that same day, I was typing this recipe up and my blogging platform asked me to log in again, which I dutifully did, and then it proceeded to erase the entire post, including the recipe. 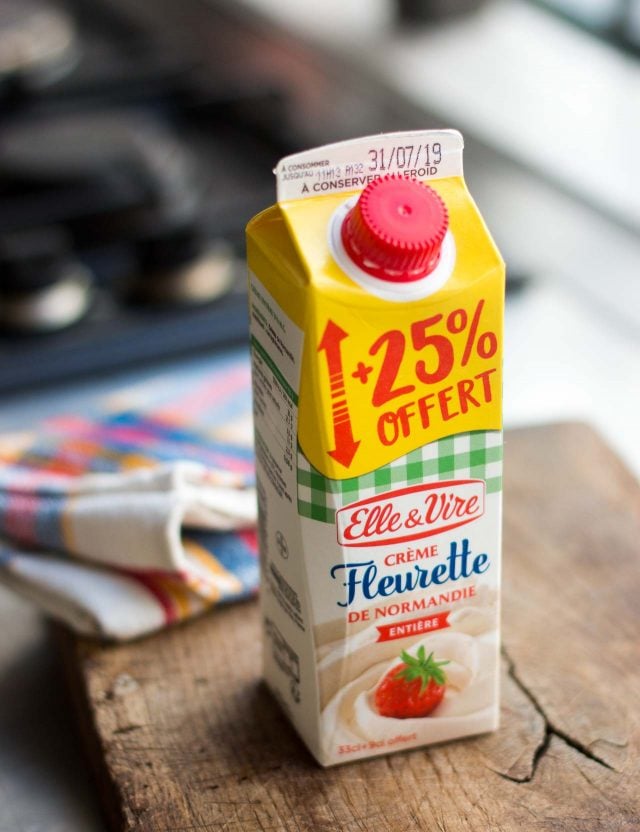 With my head on the verge of imploding, I decided to go for a walk, then head back a little later and get back to rewriting everything up from scratch. A few people told me mercury was in retrograde, so, of course, the moment I returned, they started doing construction upstairs, so was subjected to the sounds of jackhammering while trying to fill in all the ingredients in the recipe plug-in I use, so the recipes are printable, and to make sure I got all the ingredients and so forth in the right place, and the conversions.

By the time evening rolled around, some other neighbors decided to have a party and their voices were so loud, they could be heard all the way down the block. (So much for les américains having the loudest voices in town anymore.) What made up for it were these Mixed Berry Shortcakes, which we had for dessert that night.