This Turkey Taco Salad is an easy, light, and fresh dinner that’s flexible enough to feed all your family members. Mix and match your favorite taco salad toppings, or just use up what you have in your fridge!

Winter is full of lots of heavy, slow cooked, or stewed comfort foods and right around this time every year I start craving something lighter and more fresh. Enter this super simple Turkey Taco Salad. It comes together quickly, it gives me all the flavors I need, and it’s still super filling. Oh, and did I mention how flexible it is? Read on for tons of ideas for substitutions and add-ins!

I used my homemade Creamy Avocado Dressing for this taco salad, but you can definitely swap that out with your favorite creamy salad dressing. A taco or chipotle flavored ranch, green goddess dressing, or even a tangy Catalina dressing would all be great.

Can I Substitute the Ground Turkey?

Yes, this recipe works great with ground beef or pork, or you can even make it vegetarian using tempeh. To use tempeh, simply crumble the tempeh into a skillet, add a cup of water, and let the tempeh simmer until the water mostly evaporates, then add the taco seasoning and continue to sauté for a couple minutes more.

Other Add-ins and Substitutions

Taco salads are so flexible! Here are some other ingredient ideas that you can use in place of or in addition to anything listed in the recipe below: 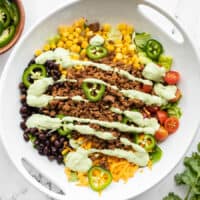 How to Make Turkey Taco Salad – Step by Step Photos

Make the creamy avocado dressing first, so the flavors have a few minutes to blend. In a food processor or blender, combine 1 avocado (peeled and pit removed), ½ cup sour cream, 1 clove of garlic (minced), ¼ tsp salt, 2 Tbsp lime juice, ¼ bunch cilantro, and ¼ cup water. Process until smooth. Refrigerate the dressing until ready to use.

Add ½ Tbsp olive oil to a large skillet and heat over medium. Add 1 lb. ground turkey and break it into pieces as it cooks. When it’s about half-cooked, add 2 Tbsp taco seasoning (or one store-bought taco seasoning packet) and continue to cook and stir until the turkey is cooked through.

While the turkey is cooking, you can begin to prepare the rest of the toppings. Rinse and drain one 15oz. can of black beans, thaw 1 cup frozen corn (I use the microwave), slice 1 pint of grape tomatoes in half, shred about 2 oz. of cheddar, and slice one jalapeño.

Also, wash and chop one head of Romaine lettuce. To begin building your salad, place the chopped lettuce in the bottom of a large serving bowl (or you can create four smaller single-serving salads).

Top with the turkey taco meat and sliced jalapeños…

And finally, drizzle your creamy avocado dressing over top and enjoy!

These super tasty Black Bean Quesadillas have been a runaway Budget Bytes hit since they were first posted in 2012. The spicy mix of cheese, beans, corn, cilantro, and onion makes and incredibly flavorful quesadilla that’s perfect for dipping in some cool sour cream or salsa. Make up an entire batch and freeze some for […]

These super tasty Black Bean Quesadillas have been a runaway Budget Bytes hit since they were first posted in 2012. The spicy mix of cheese, beans, corn, cilantro, and onion makes and incredibly flavorful quesadilla that’s perfect for dipping in some cool sour cream or salsa. Make up an entire batch and freeze some for later! 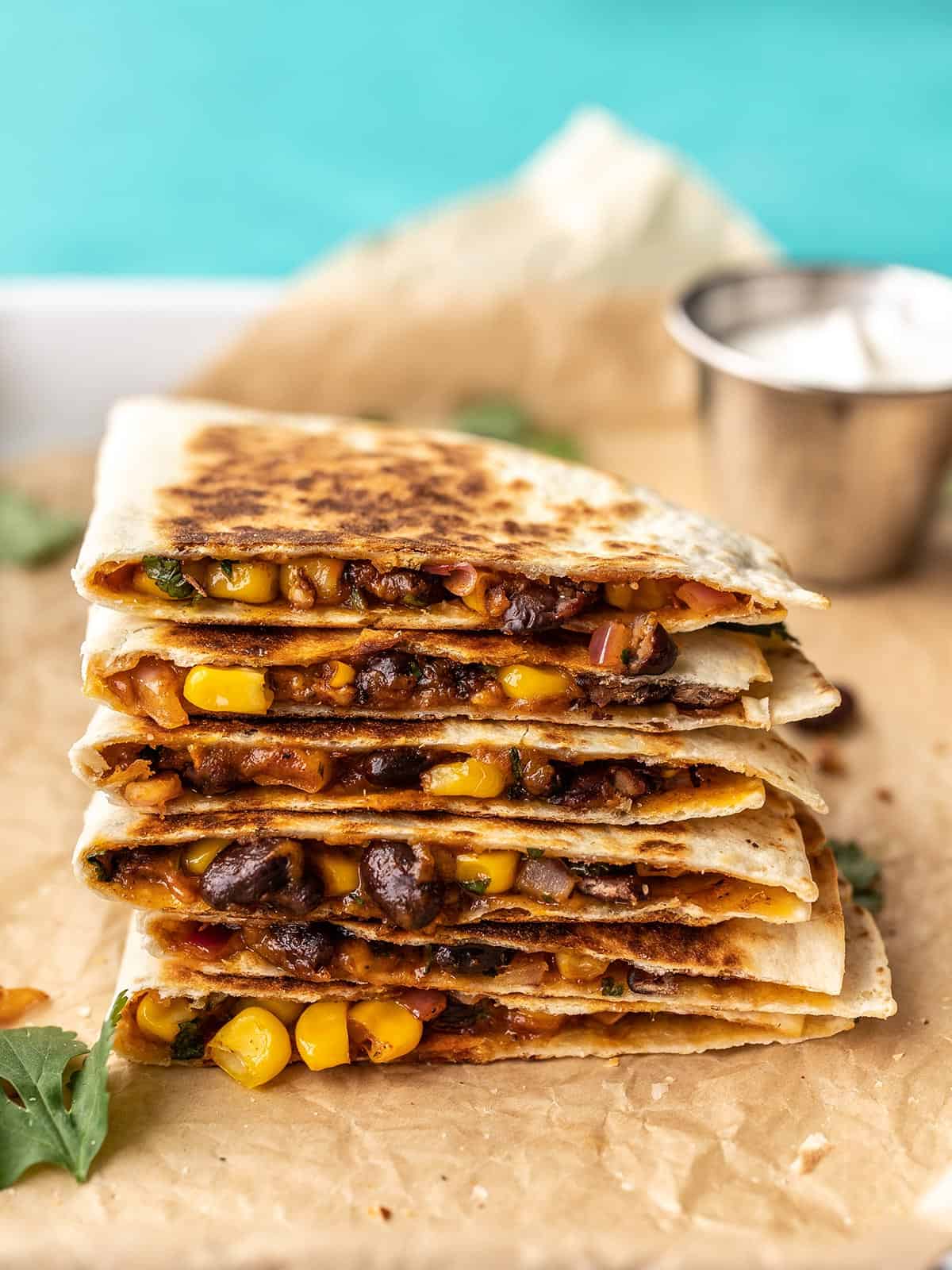 Why I’m In Love with These Quesadillas ❤️

I love these quesadillas for three reasons:

Students and other busy people take note: this recipe is perfect for you!

I called them “hearty” black bean quesadillas because they are surprisingly filling. I hastily ate two and then promptly felt like my belly was not just full, but full-full. This is one of those vegetarian recipes that meat-eaters won’t feel deprived when eating. Promise.

Just fill and fold your quesadillas, but before you cook them, stack them with parchment paper in between each quesadilla. Place the stacked quesadillas in a gallon-sized freezer bag (or two) and pop them into the freezer. When you want to eat one, take a quesadilla out of the freezer and reheat it slowly over medium-low heat until the outside is crispy and the inside has melted. Using a lower heat gives the black bean quesadilla time to thaw and heat on the inside before the outside overcooks or burns.

Or, for a faster method, microwave from frozen for 30-60 seconds, or until the inside is thawed, then finish in a skillet to crisp up the outside and melt the cheese on the inside.

What Kind of Taco Seasoning to Use 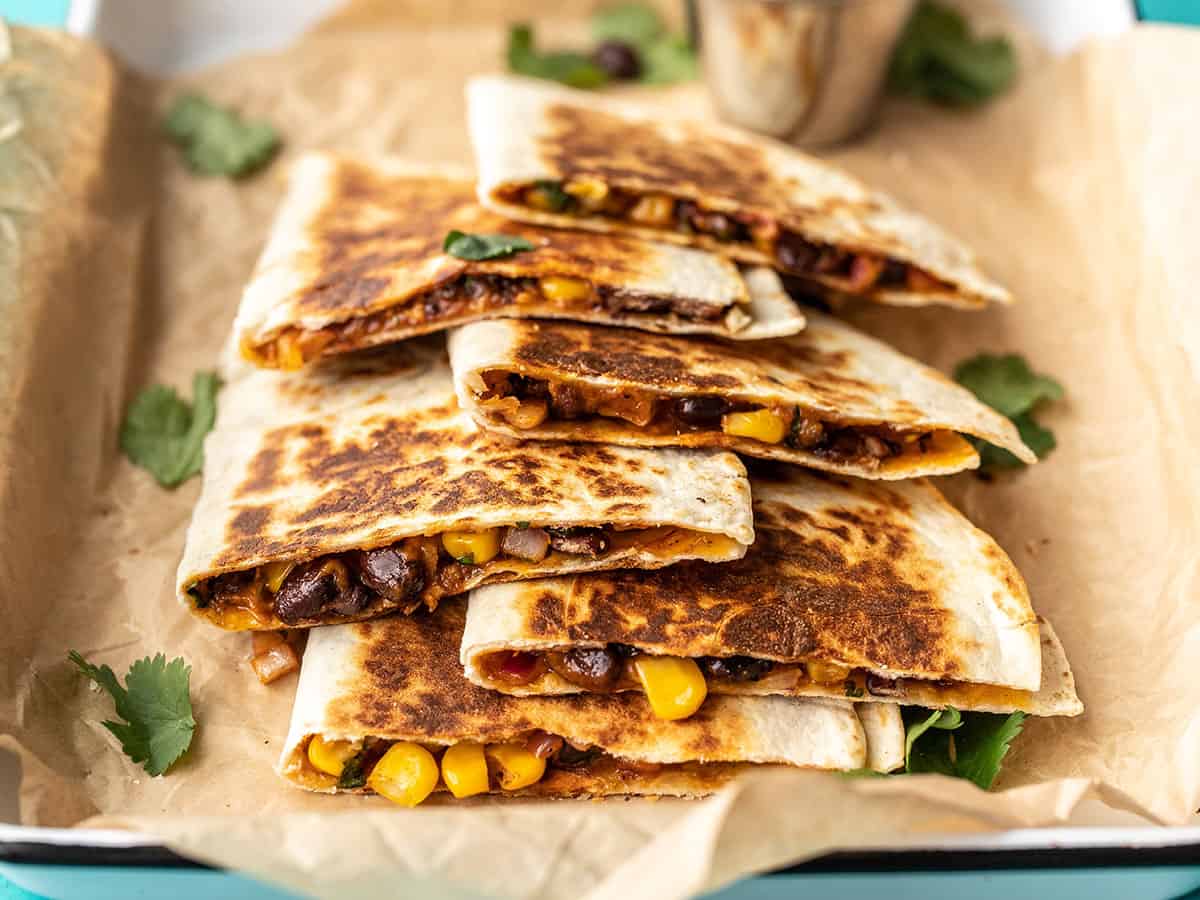 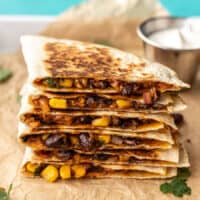 Scroll down for the step by step photos 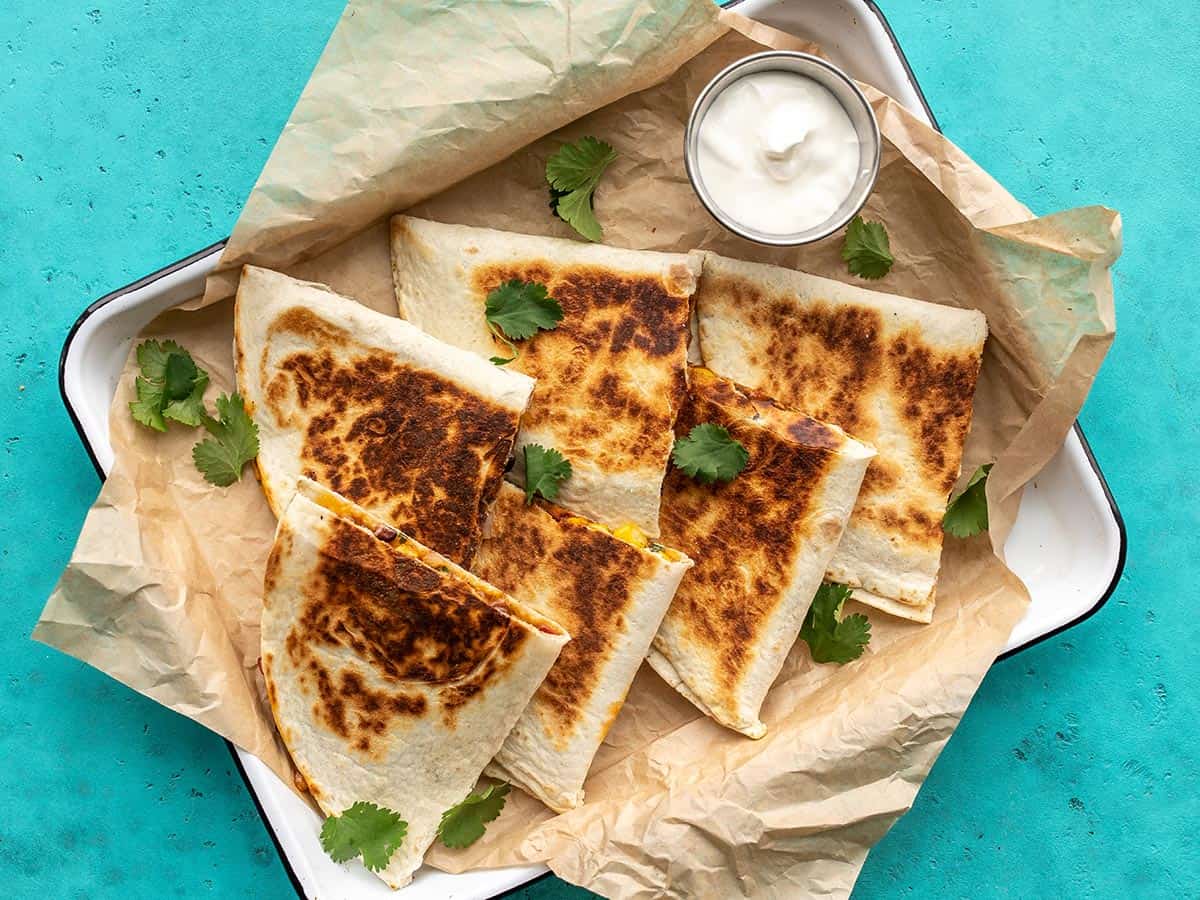 How to Make Black Bean Quesadillas – Step By Step Photos 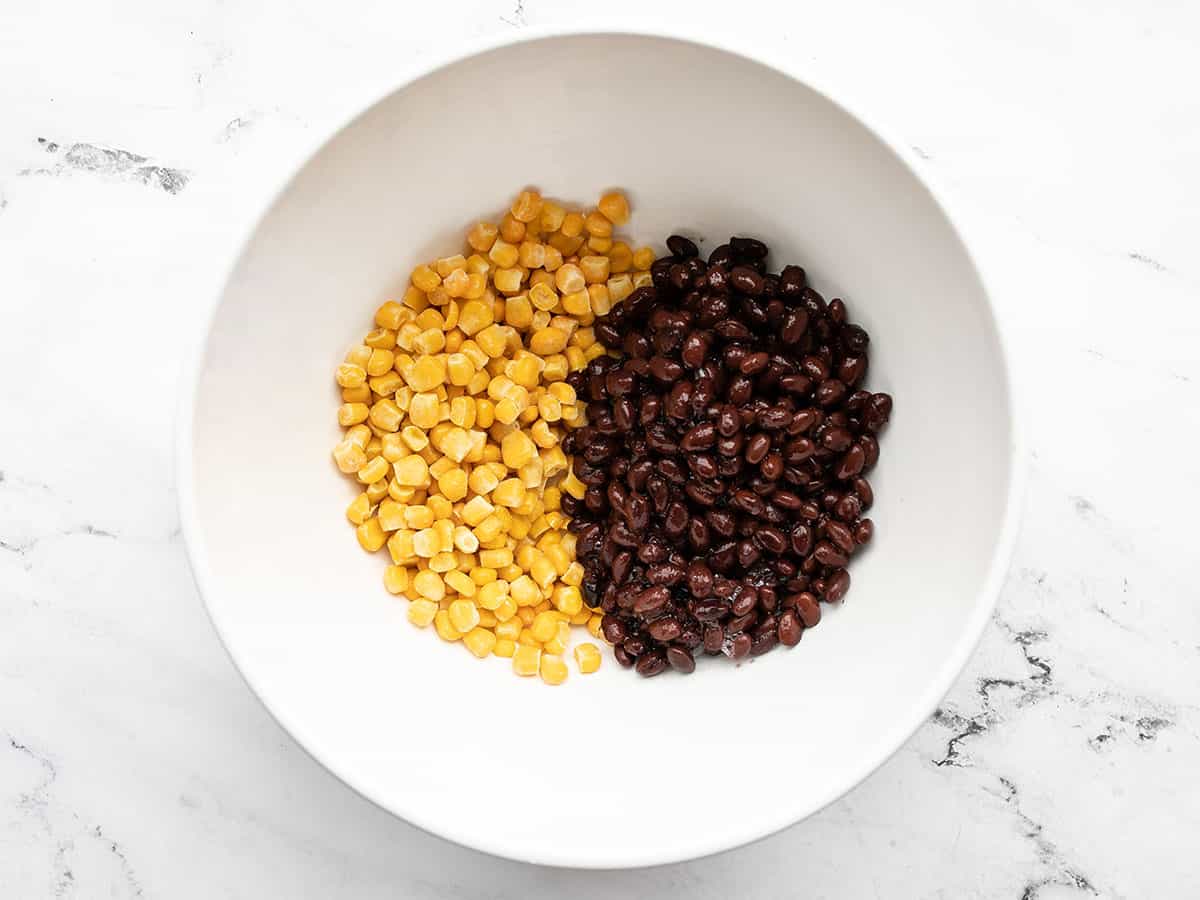 Add 1 cup frozen corn (no need to thaw) and one 15oz. can of black beans (drained) to a large bowl. 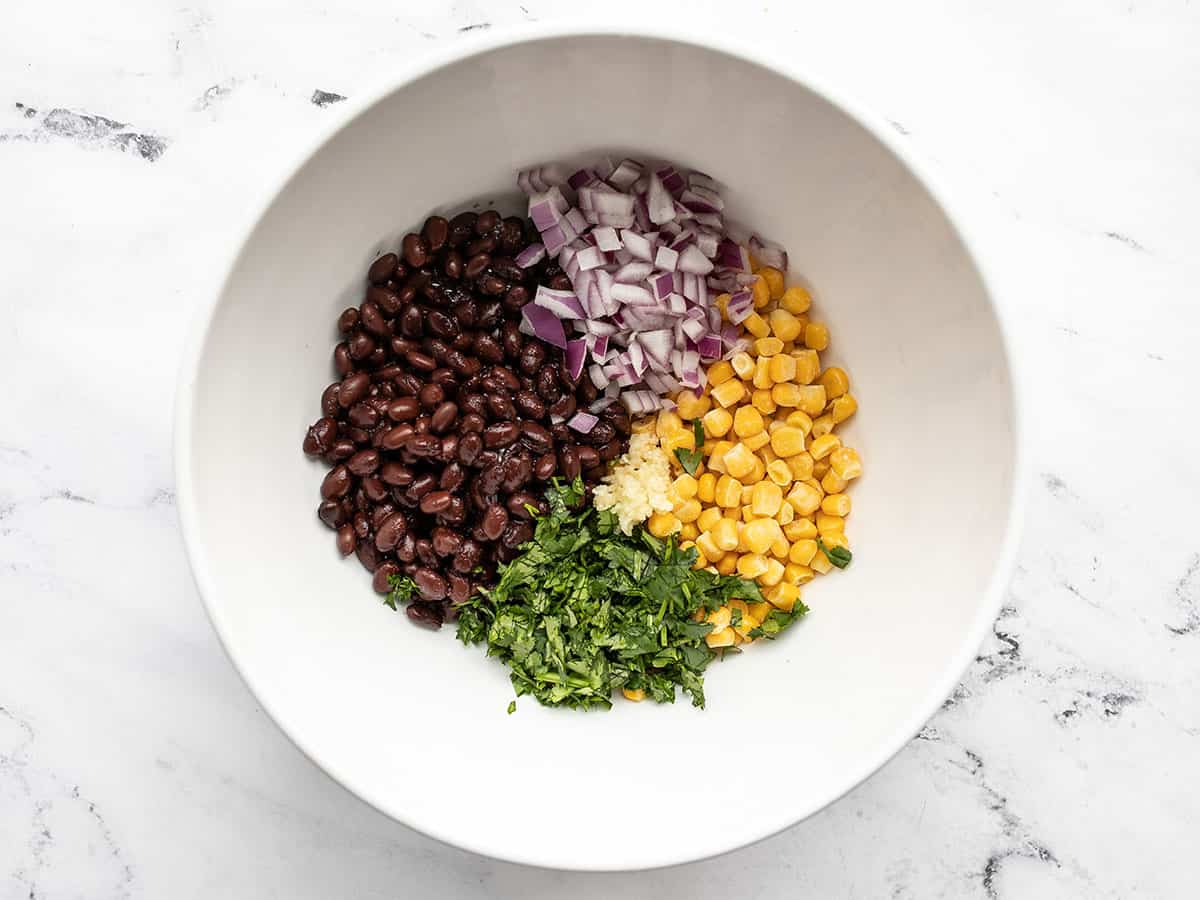 Next, finely dice about ½ cup red onion, mince one clove of garlic, and roughly chop about ¼ bunch fresh cilantro. These ingredients are super flexible, so you don’t need to be exact on the measurements. 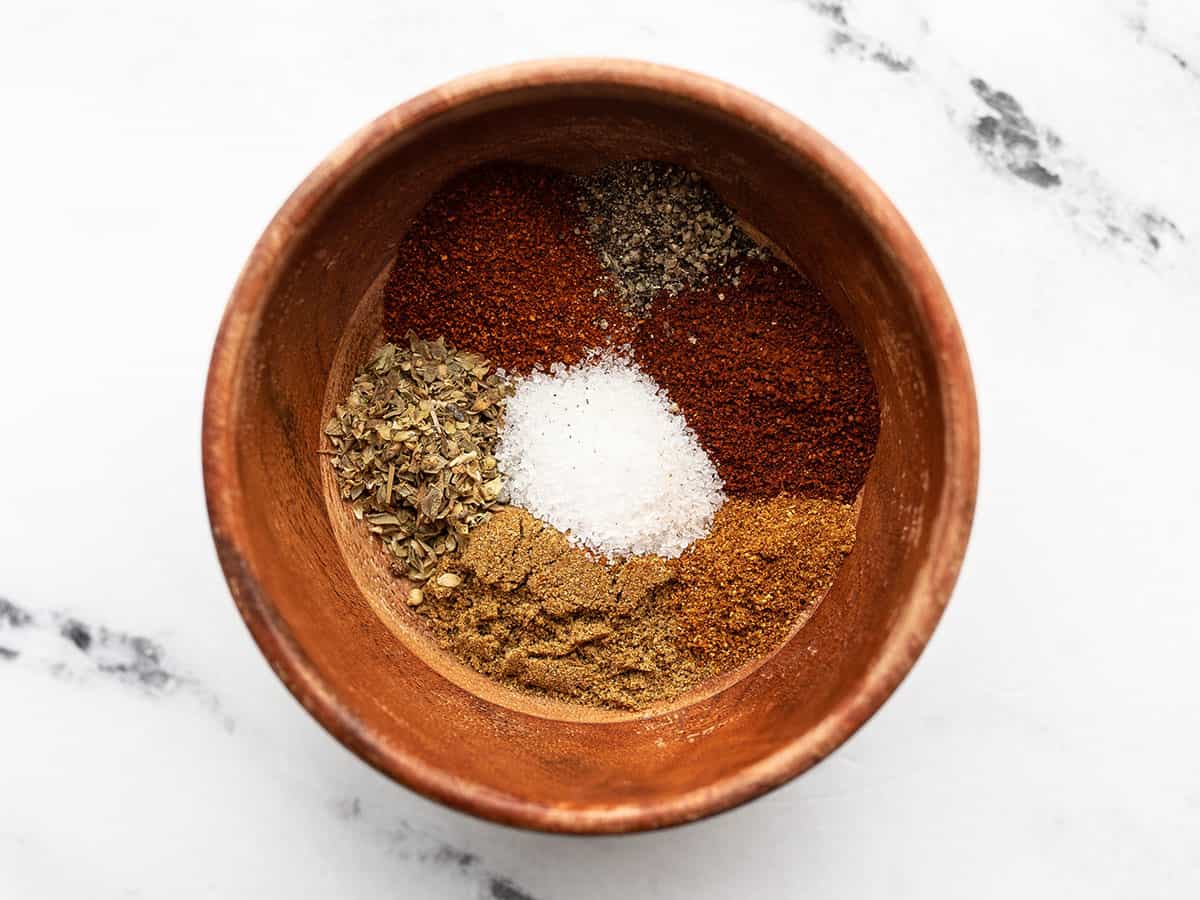 You can use either one packet of store-bought taco seasoning, or make your own using my Homemade Taco Seasoning recipe. 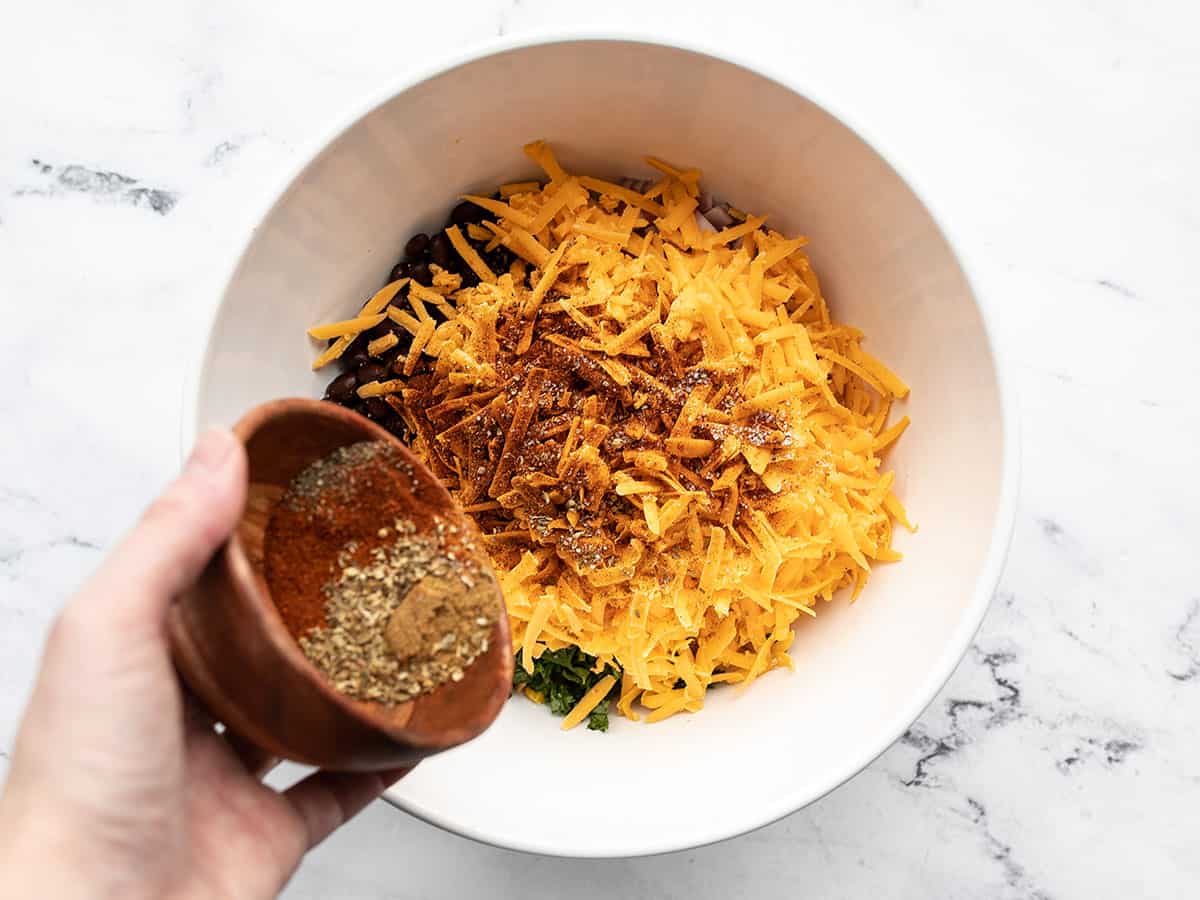 Add the taco seasoning and 2 cups shredded cheddar cheese to the bowl. The cheese is the “glue” that holds the quesadillas together. 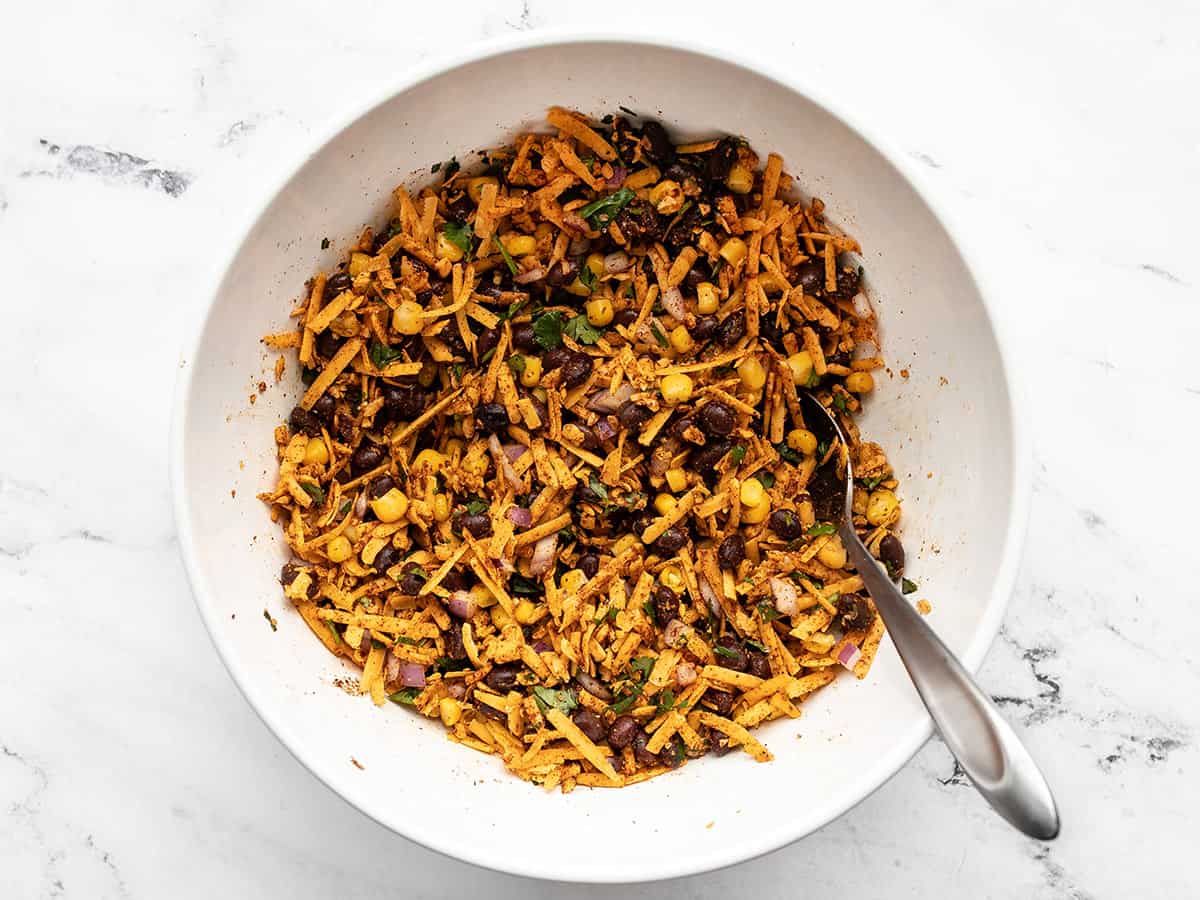 Stir the ingredients until everything is mixed. 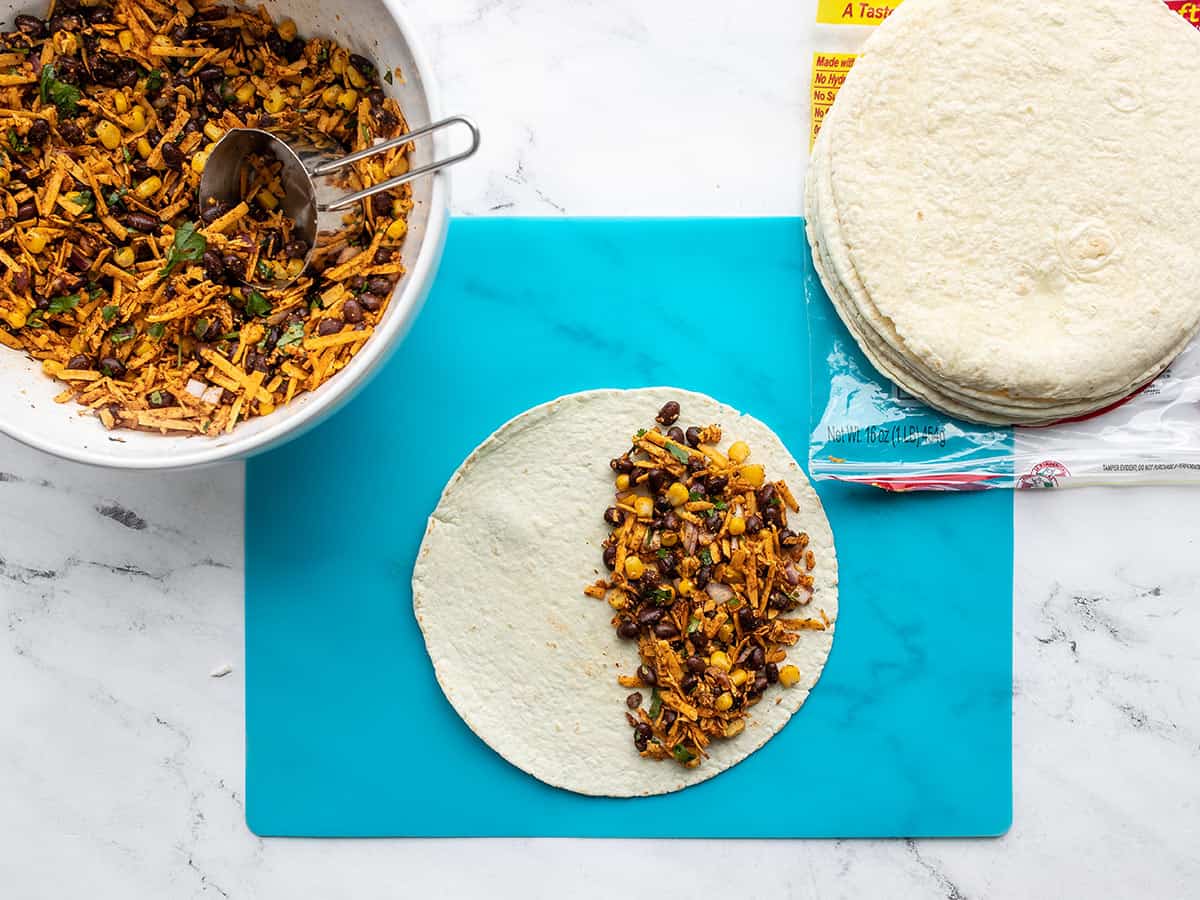 Now it’s time to stuff the quesadillas. You’ll need about 10 7-inch diameter flour tortillas for these quesadillas (the tortillas I had today were slightly larger so my quesadillas ended up being a bit thinner). Place a half cup of filling in each tortilla and fold it over. You can either cook them or freeze them at this point (see instructions for freezing in the post above the recipe). 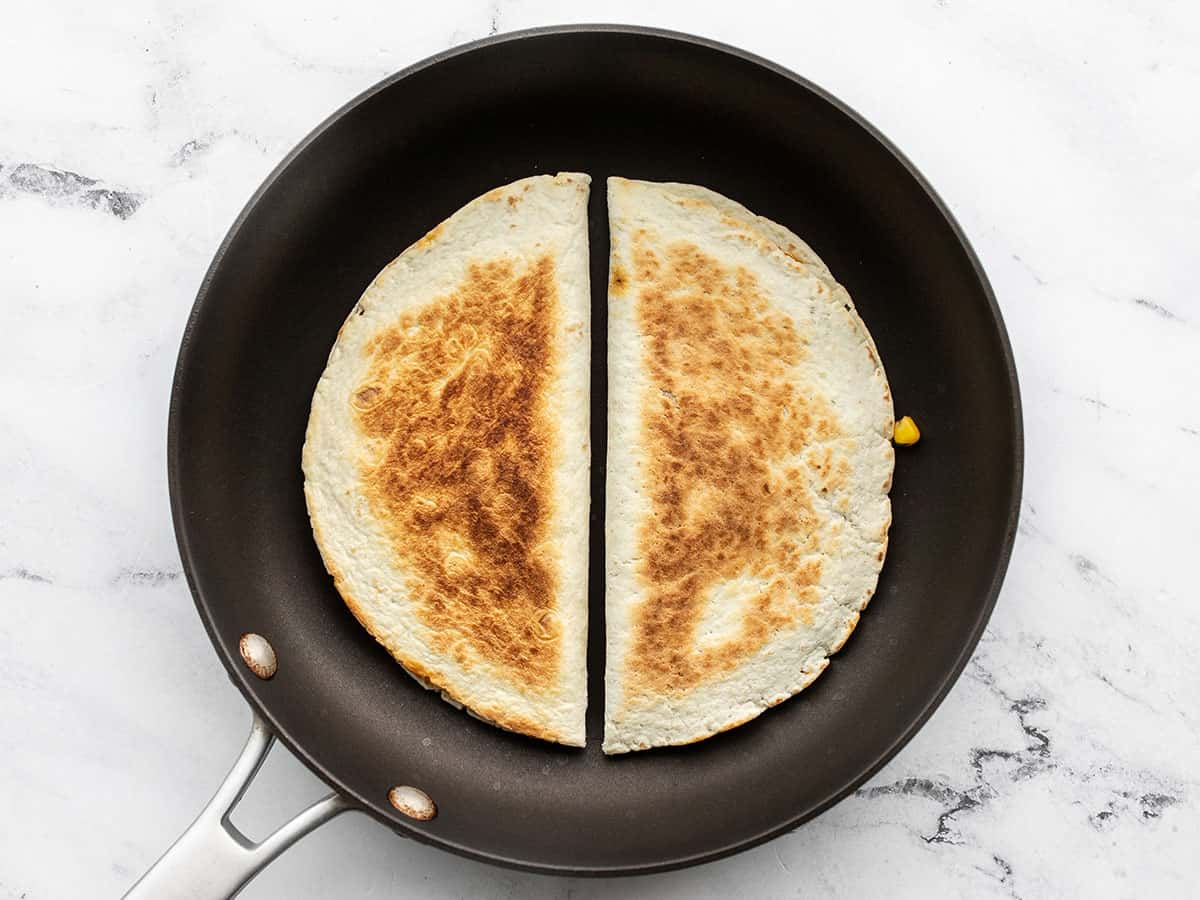 To cook the black bean quesadillas, place the quesadilla in a skillet over medium heat and cook on both sides until golden brown, crispy, and the filling has melted. I don’t use any sort of oil or butter, but you certainly can if you want more of a fried finish to the quesadillas. 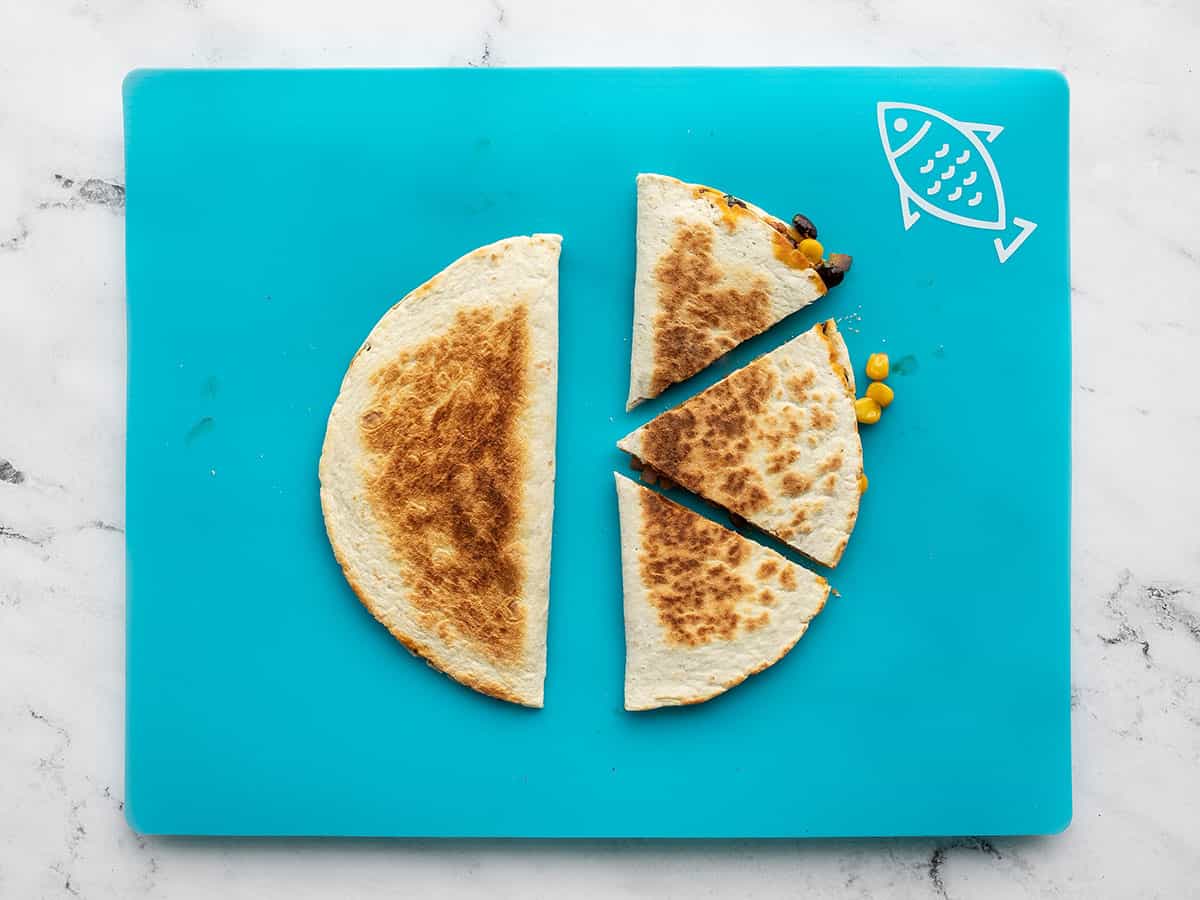 Slice then serve! You can slice each quesadilla into two or three pieces. I find that if I cut starting on the outside edge going in toward the center fold, I get less of the filling oozing out. A pizza cutter also works great! 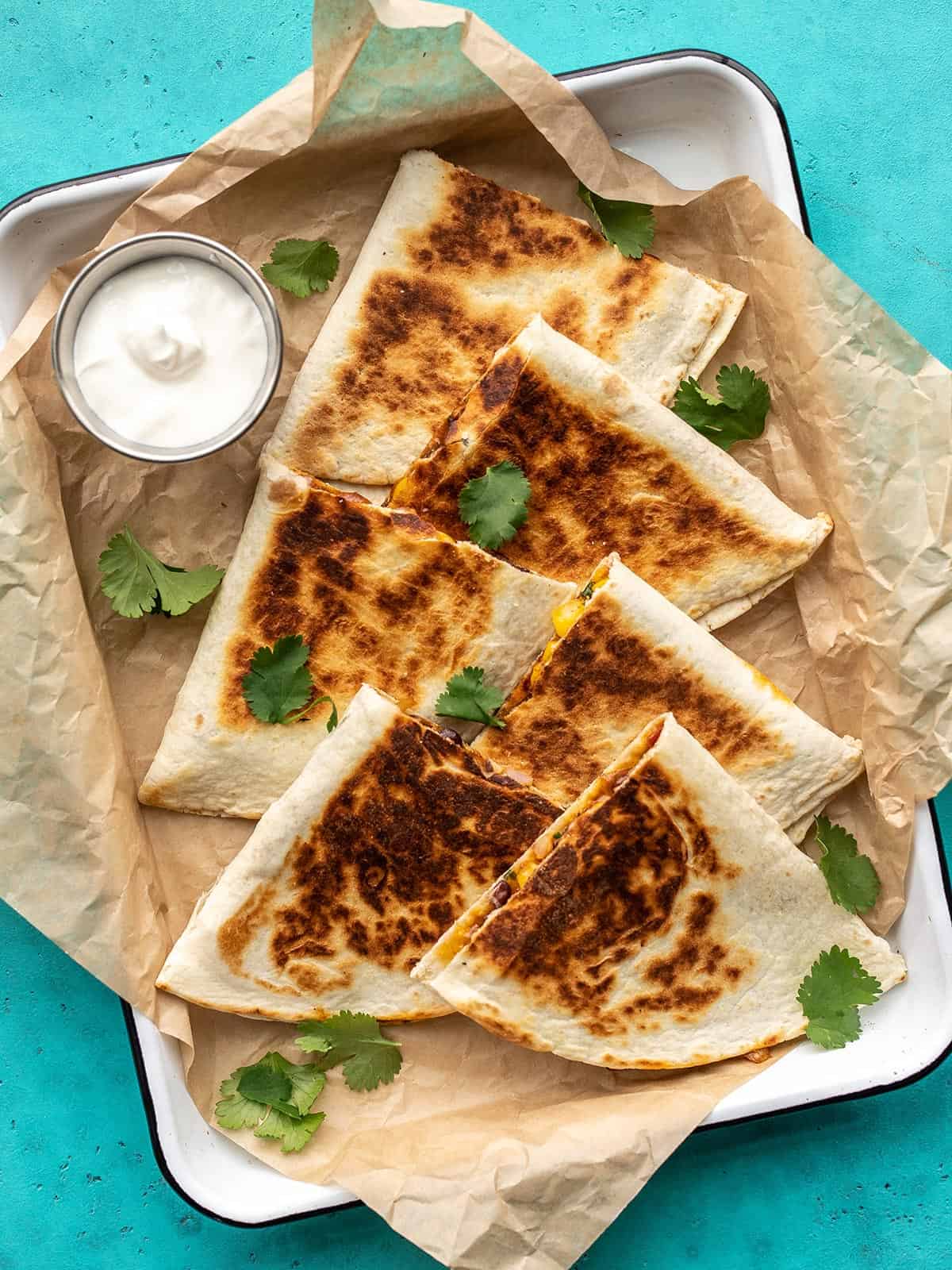