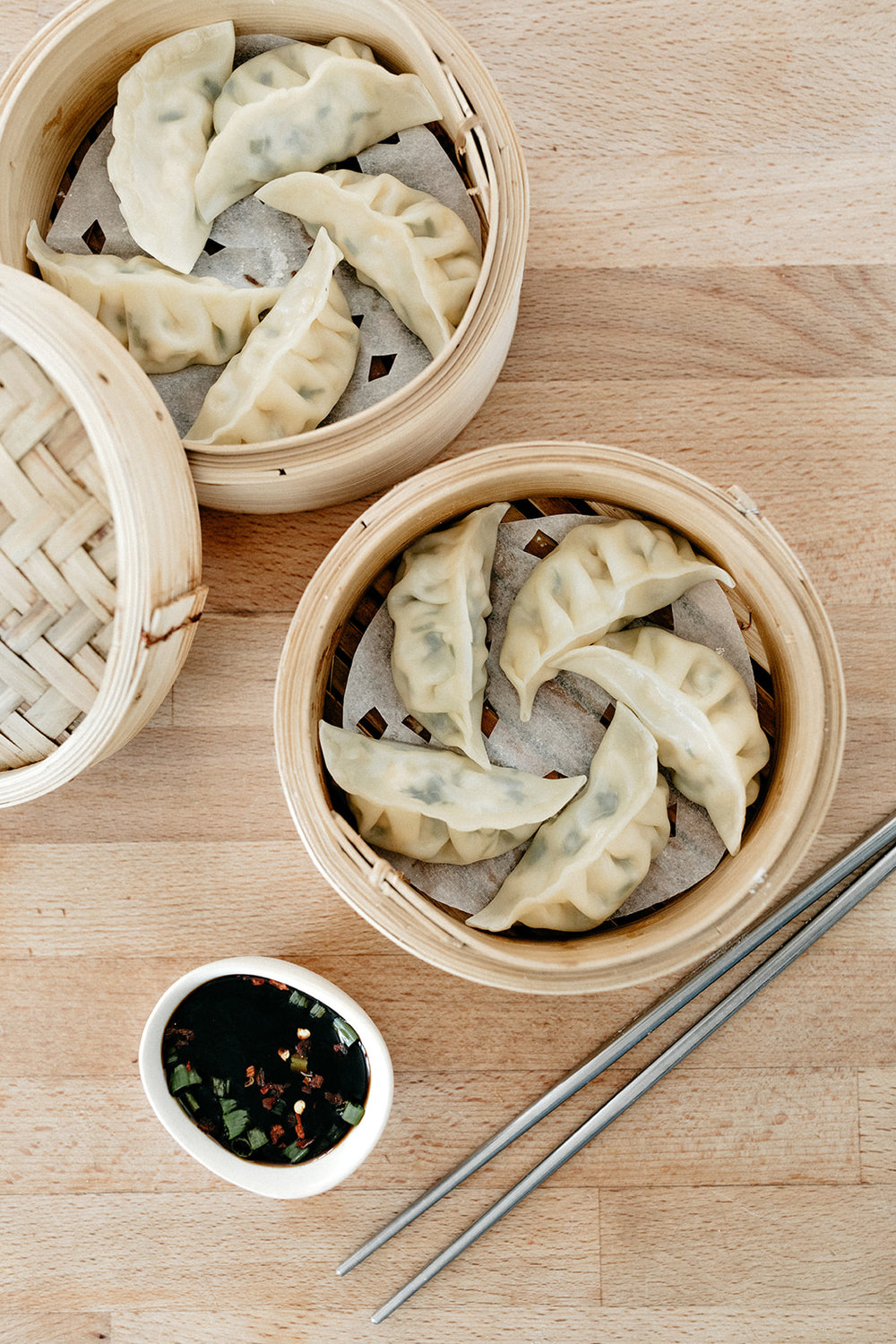 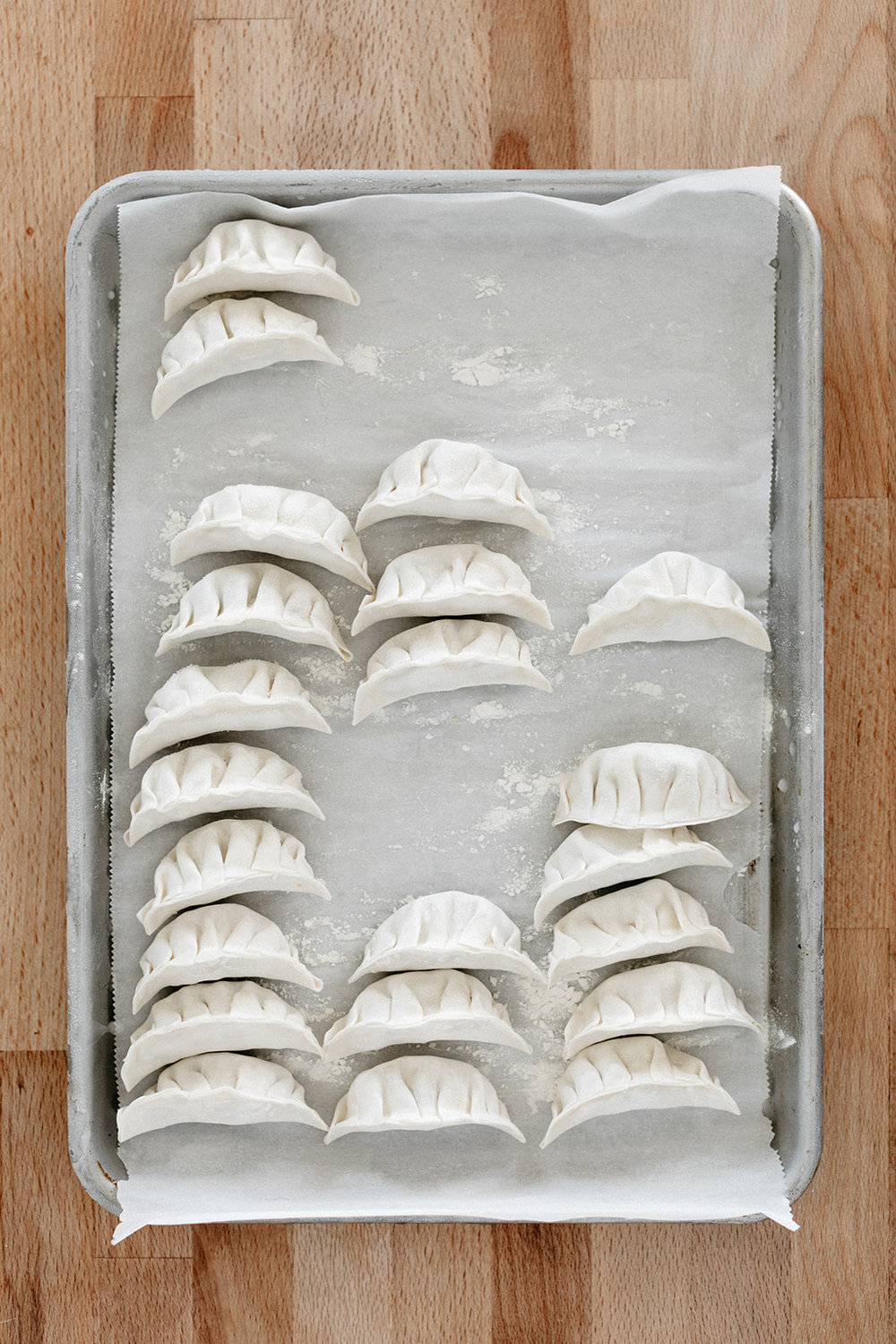 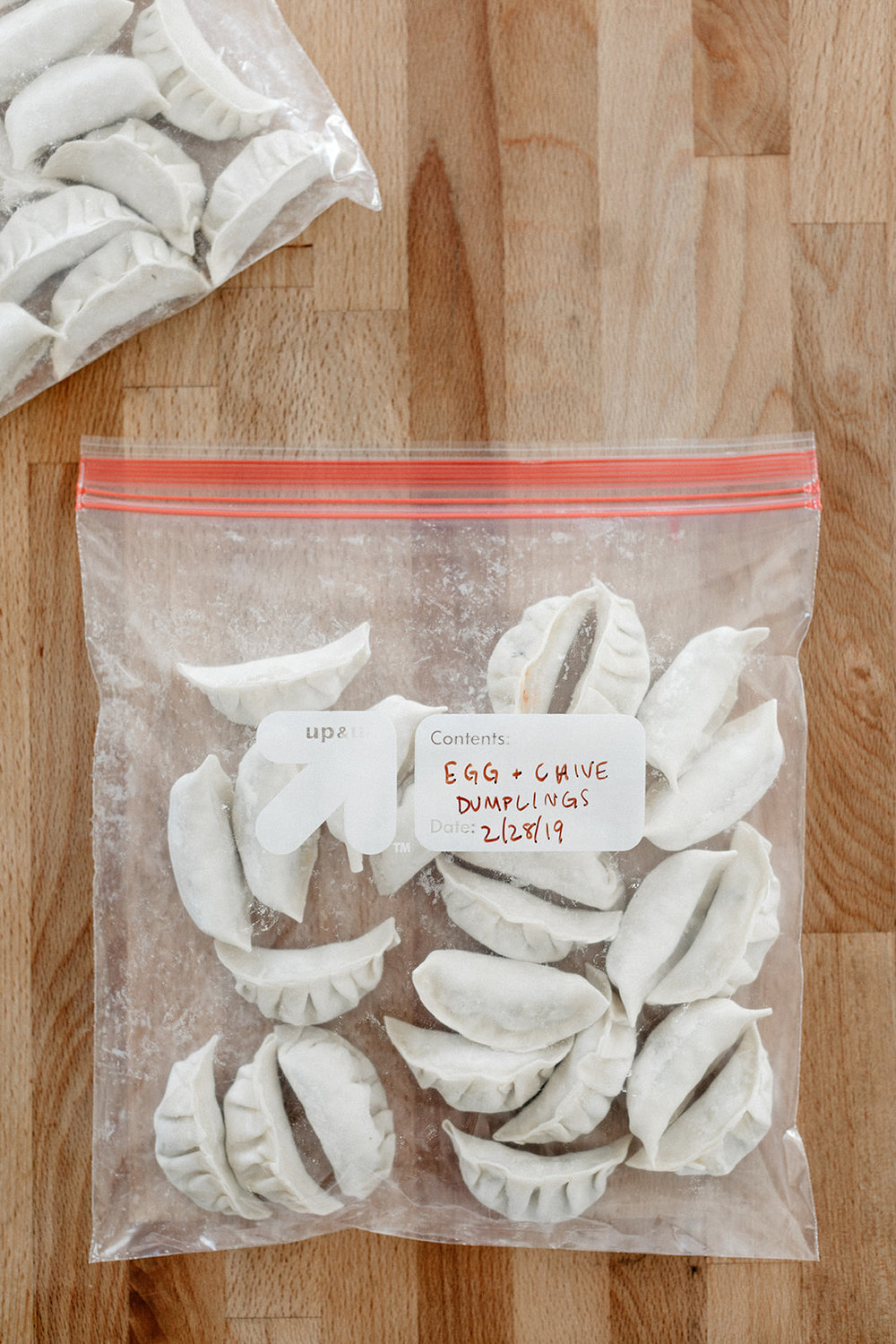 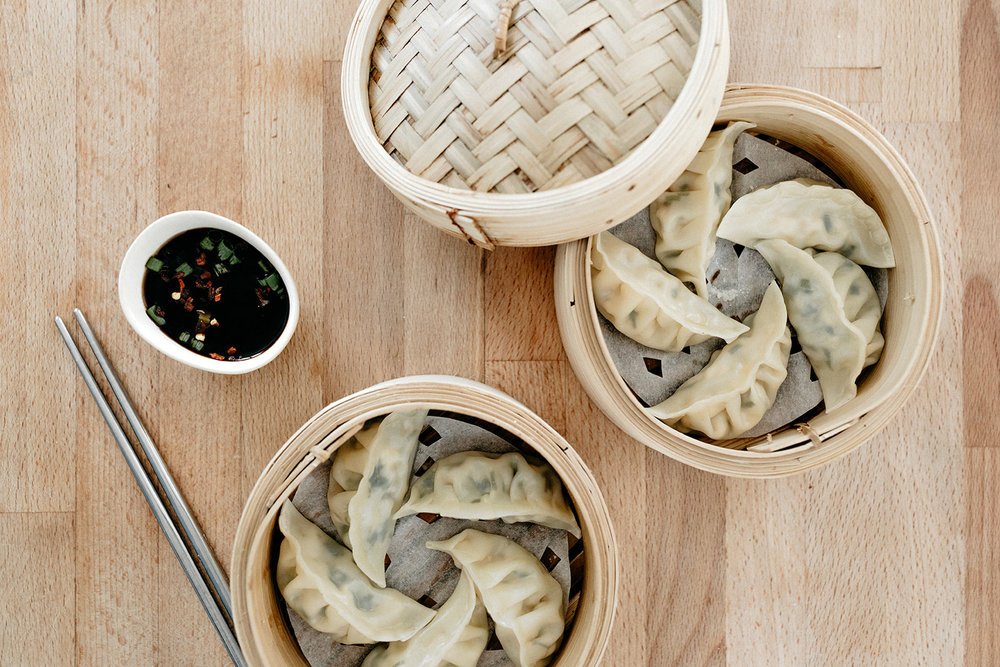 After making a bunch of Adam and Ryan’s potstickers for meal prep, I got on a potsticker kick and wanted to make more! Even though my very puffy pregnant hands made pleating a little bit difficult, I spent two extremely pleasant afternoons sitting at the kitchen table, folding dumplings while ice skating was on (this was back in February during the Four Continents competition). It also made me feel like I was in the dumpling scene in Crazy Rich Asians. For this second round of dumplings, I wanted a super low maintenance filling that would also pack some protein, so I went with a classic- egg and chive! The soft fluffy filling could not be easier and it’s so easy to adjust if you want a little more ginger or heat or whatevs. I also like that since it’s totally cooked before going into the dumplings, it makes for a kid-friendly project where you don’t have to worry raw meat getting everywhere. So, Bernie, when you’re ready, say the word and we’ll get pleating!!!

All purpose flour, for dusting

In a large bowl, whisk together the eggs, soy sauce, and rice vinegar and set aside. In a large skillet, heat the butter and sesame oil over medium high heat. Add the ginger and cook for about a minute, until fragrant. Add the eggs and cook, stirring gentled with a rubber spatula until just set (don’t over cook, otherwise the filling will be dry). Transfer to a large bowl (I use the same bowl that I whisked the eggs in) and break up the egg into small pieces with your spatula. Stir in the chives, a few good turns of black pepper, and sriracha or crushed red pepper to taste. Taste and adjust as desired.

Line a sheet pan with parchment paper and dust with flour. Fill the dumpling wrappers by moistening the edges with water, adding a heaping teaspoon of filling, and pleating the edges, pinching well to seal. (I do this step seated at my kitchen table since it takes kind of a while. I’d also recommend YouTubing pleating videos, way easier to see it than to describe it!) Place the dumplings on the sheet pan.

If cooking immediately, you can either steam or fry them. To steam, cut out a round of parchment paper to fit in the bottom of your steamer and cut a bunch of holes in it. Place the dumplings in the steamer leaving a little bit of room between them and set the steamer over a pot of boiling water. Steam for about 10 minutes, or until cooked through. Let cool slightly and serve. I like dipping mine in a half-and-half mixture of soy sauce and vinegar. Maybe a drizzle of sesame oil.

To fry, heat a thin layer of flavorless oil in a large lidded nonstick skillet. Place the potstickers flat-side down in the skillet in a single layer and cook until browned on the bottom, 2 to 4 minutes. Add 1/4 cup of water and immediately cover the pan, since it will be very spitty. Cook for 3 minutes, then remove the lid and continue to cook until all of the water evaporates. Let cool slightly and serve. I like dipping mine in a half-and-half mixture of soy sauce and vinegar. Maybe a drizzle of sesame oil.

To freeze, stick the sheet pan into the freezer and freezer for a few hours until the dumplings are firm. Transfer to a ziploc bag and stick back in the freezer for up to 3 months. Heat them either by steaming or frying (adding an extra few minutes for each method), or using one of the methods here.