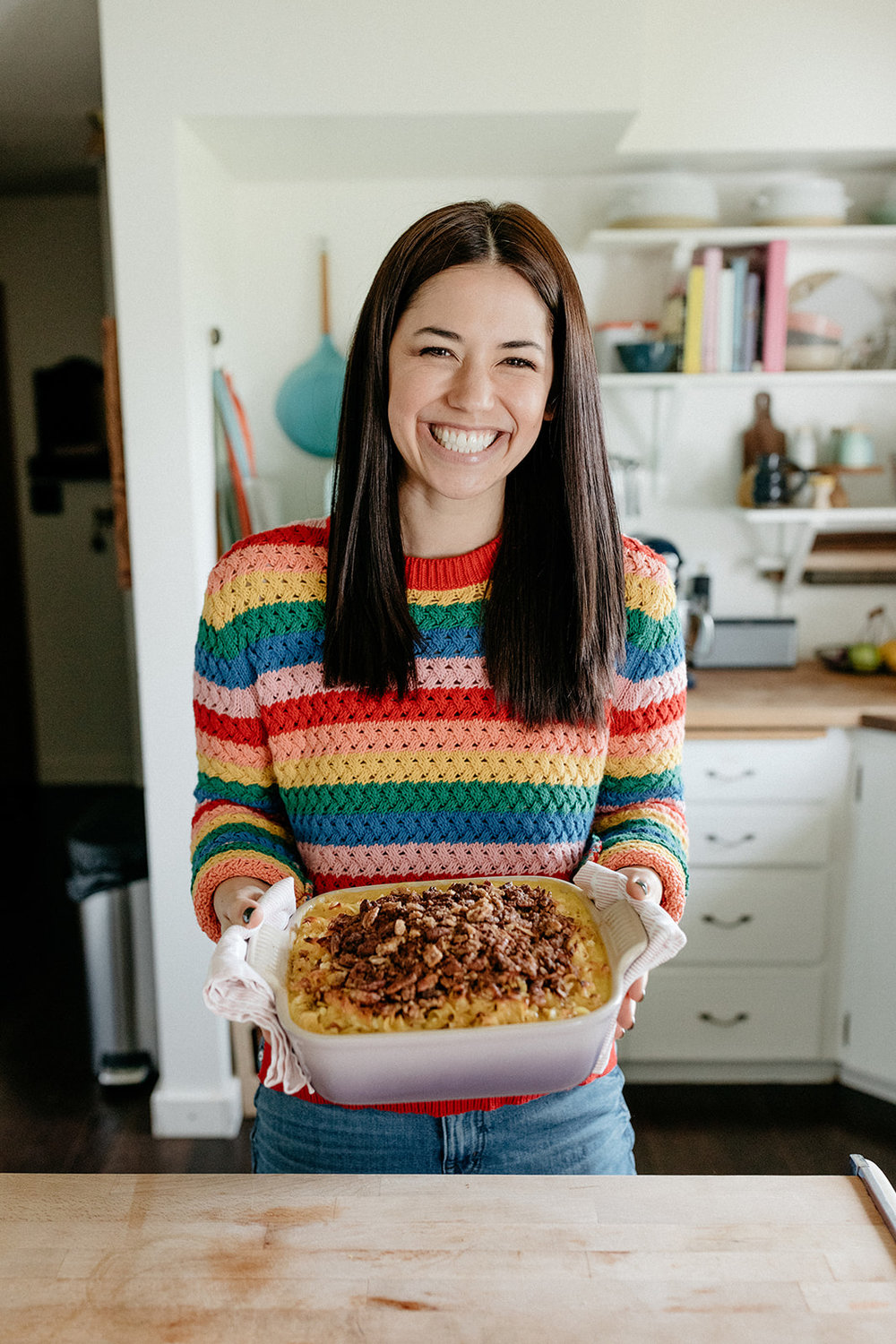 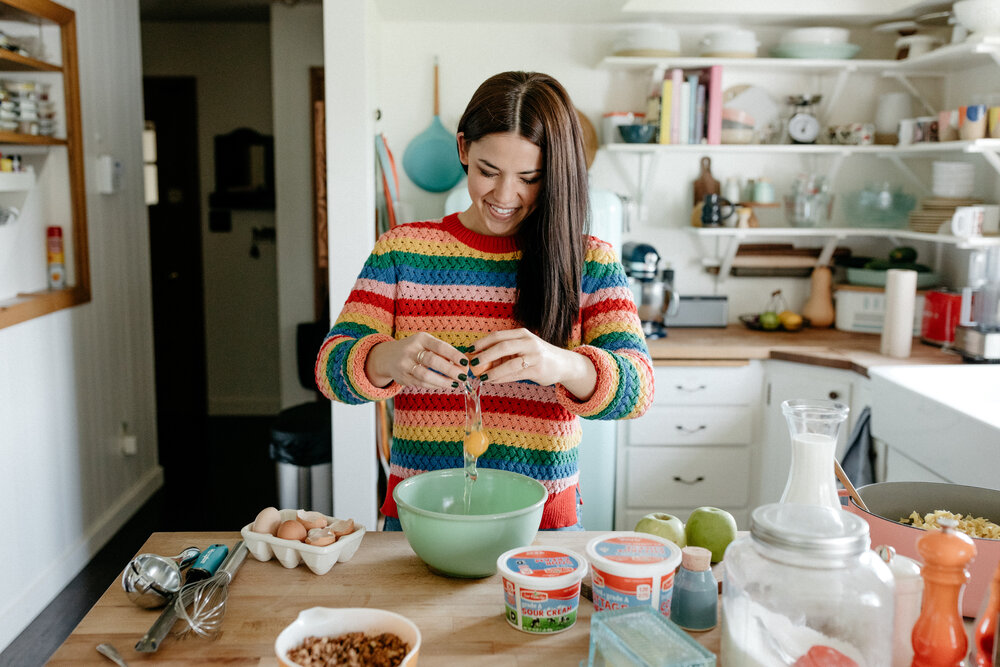 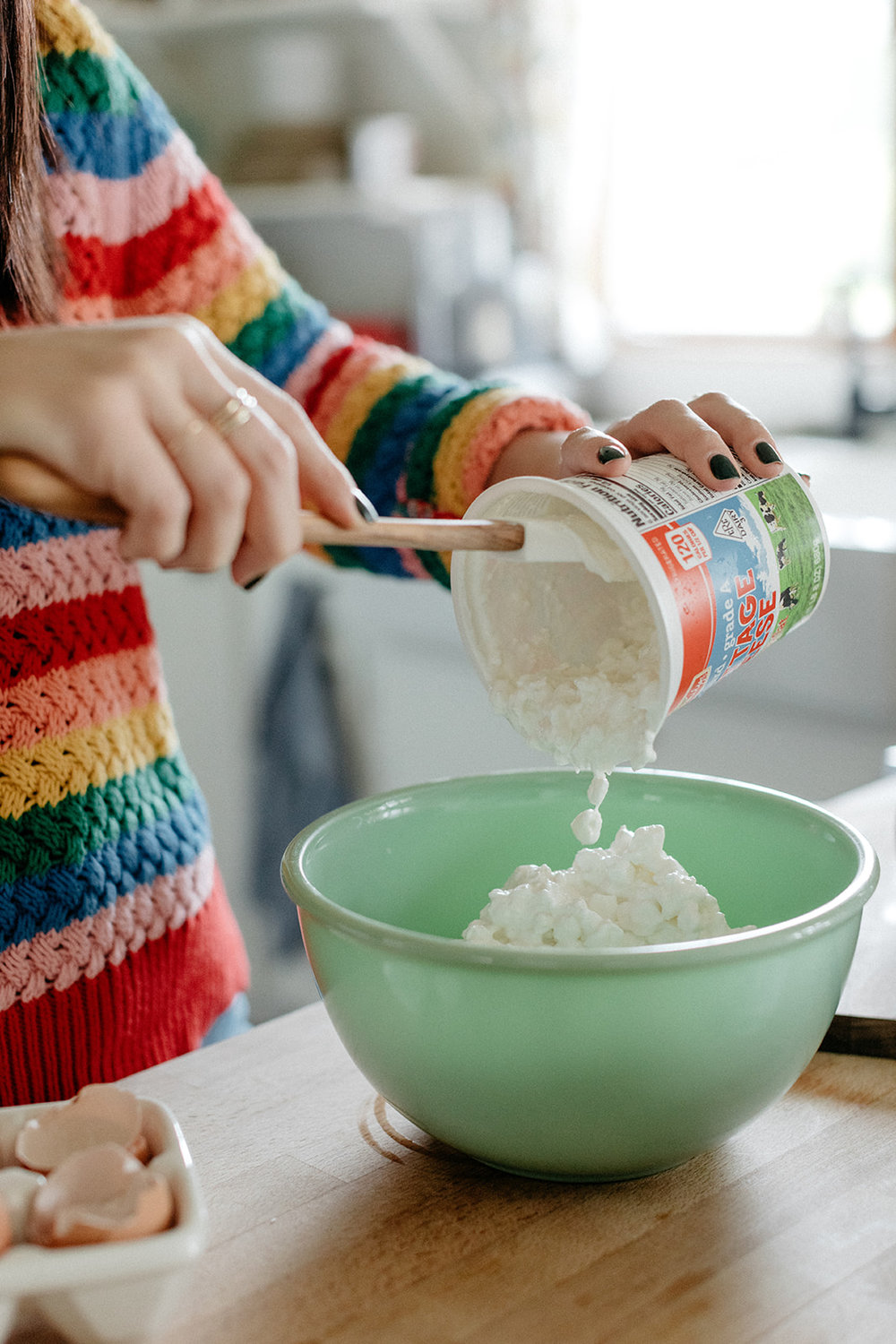 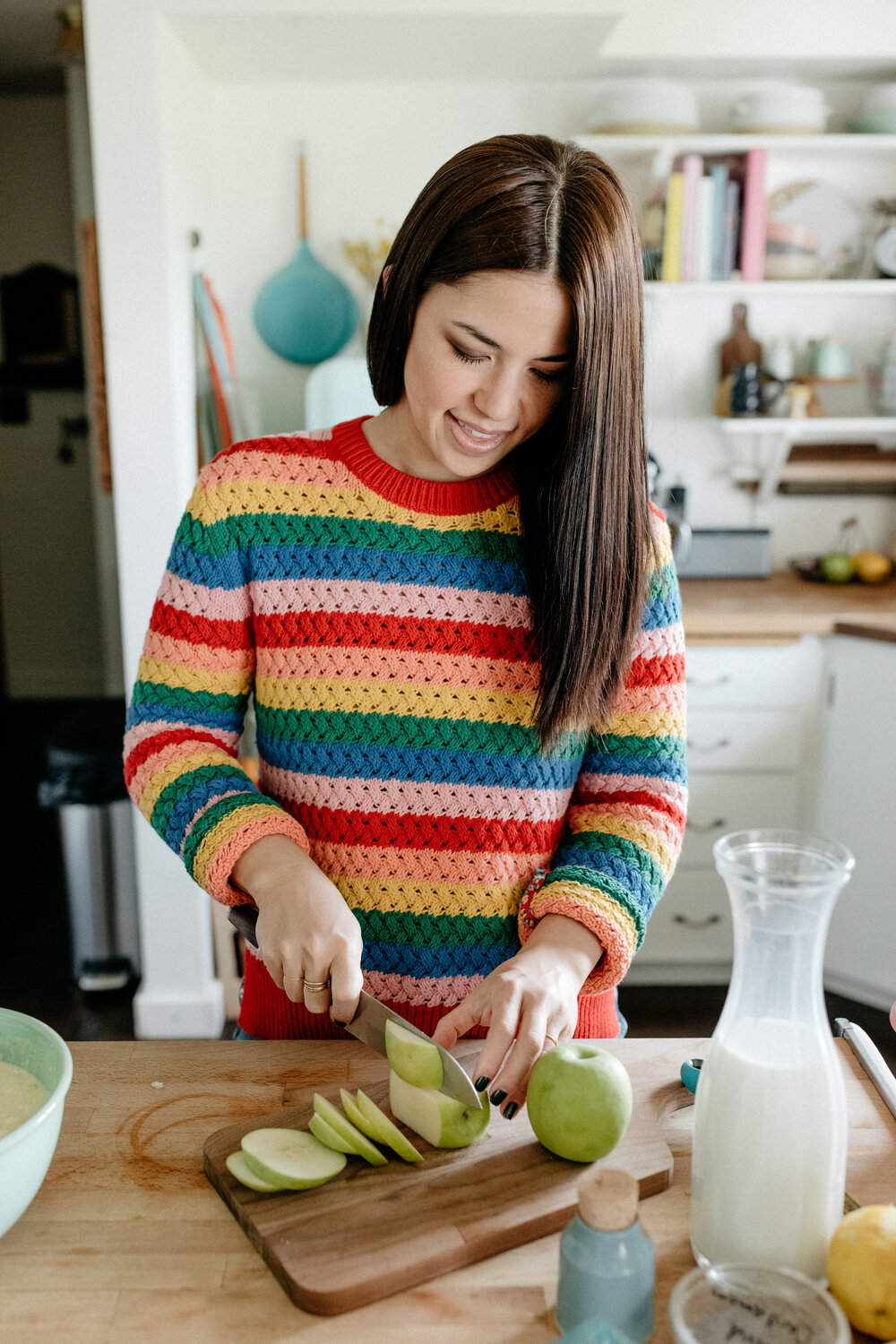 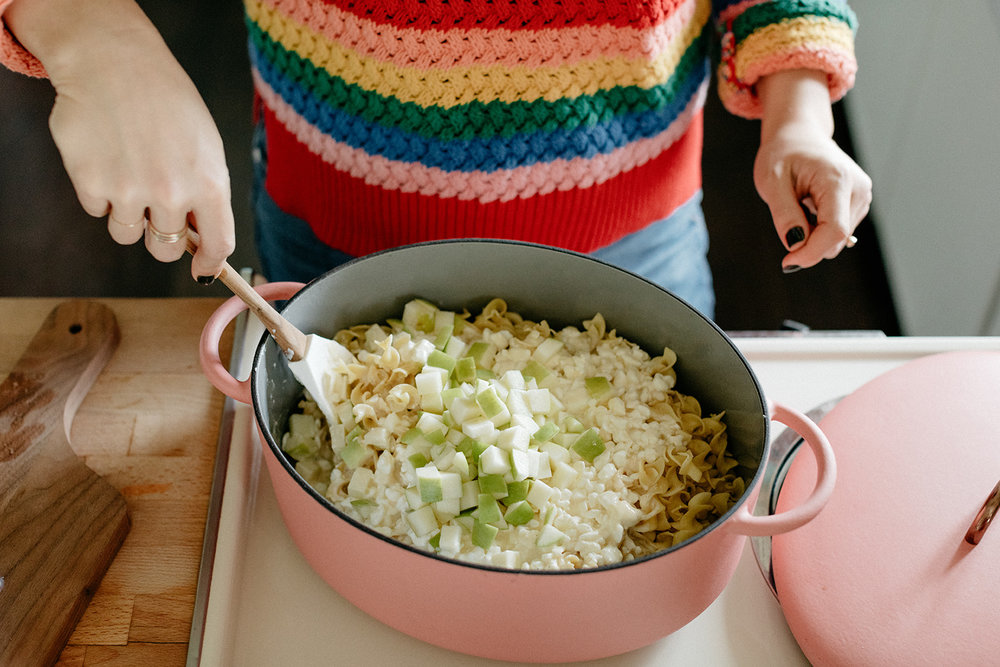 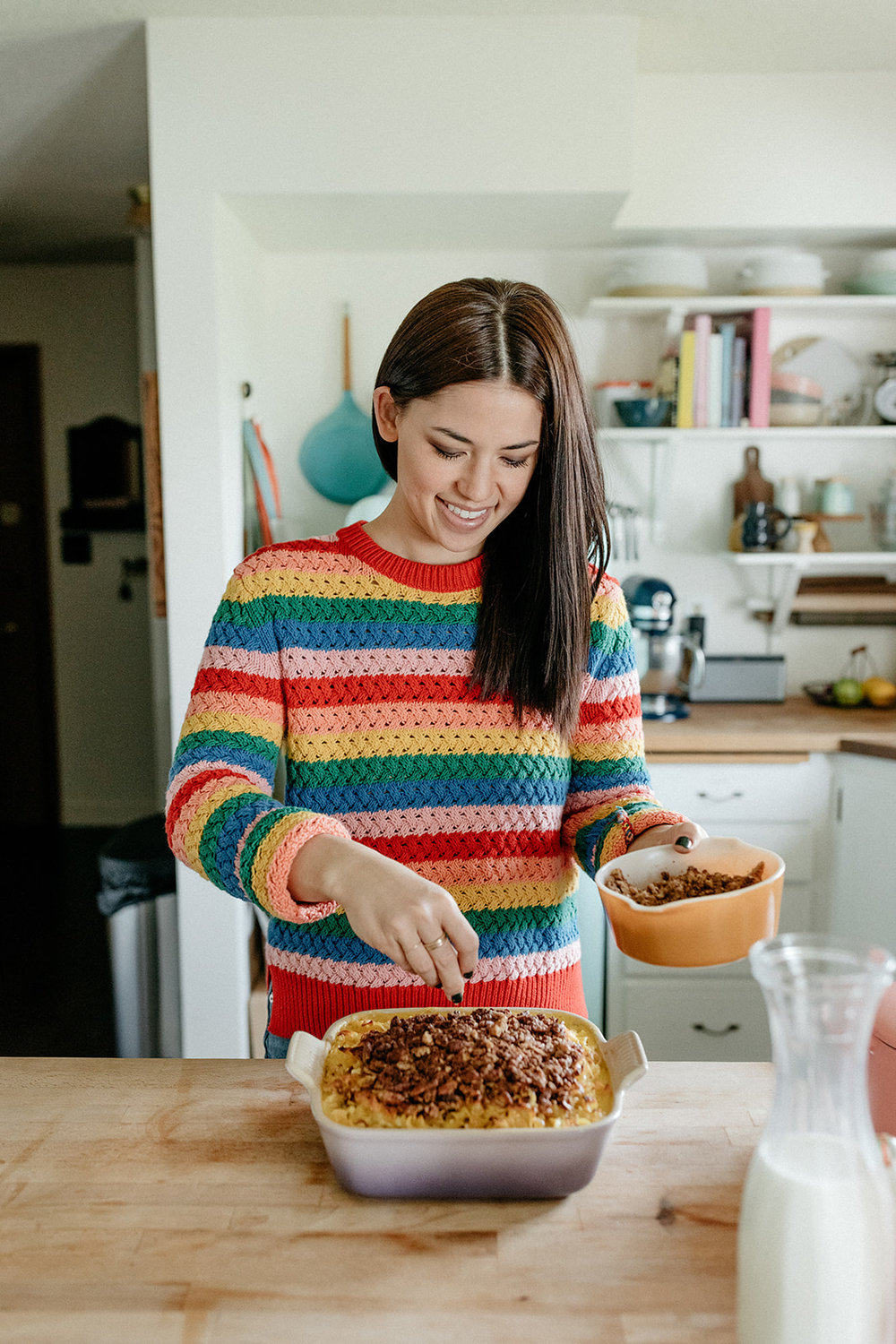 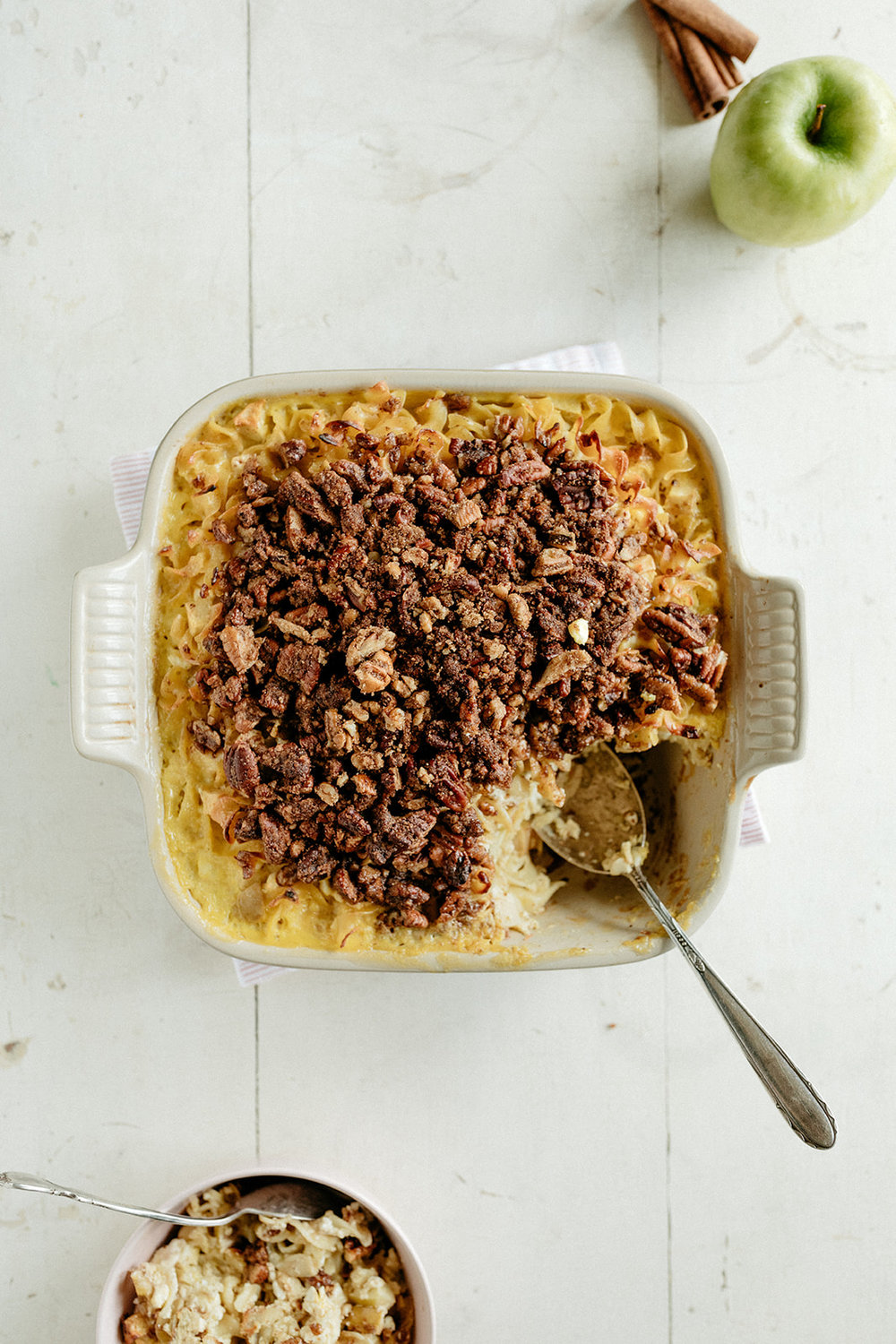 [Hotdish is to my upper Midwest fronds as kugel is to me.]

Not in the way that kugel was a dish that we ate on a regular basis for dinner growing up, but rather in the way that I just assumed that everybody grew up with it and took a nostalgic comfort in it. Like I literally thought that everyone knew kugel until last year, when Alana talked to me about her first experience about it. I was in shock that she’d never had it! It’s like a… sweet mac and cheese? It was… interesting! But in a good way! And then I met a dozen more people with the same reaction at the Fargo Hotdish Festival when Bernbaum’s brought an amazing kugel to compete with tater tot hotdishes of all sorts. It dawned on me then that not everyone knows this dish that was so central to my childhood holidays and I suddenly had to figure out a way to explain it and convince my fronds that it totally deserved to be classified as a hotdish.

And seriously, if you bend the definition of a vegetable to mean, well, fruit then you’ve got it: the cottage cheese mixture is your sauce, the noodles are your starch, the nuts are your protein, and the raisins/cherries/apples are your produce. Hotdish. Sold.

Flavor-wise, think of it as rice pudding made with noodles! And baked! Or, ok, a slightly sweet, a teensy bit sour, and kind of soufflé-like mac and cheese. And for all of the times I’ve made fun of Eggboy for having sweet cookie salad alongside the main course of his meal (as opposed to as dessert), I now owe him an apology because kugel, in all of its dessert-leaning glory, is part of the main course.

The kugel that my mom made growing up was based on Emeril’s recipe. It was such a great combination of richness and milkiness and it had the perfect touch of cinnamon and sugar, as well as a toasty nutty topping. It was, and continues to be, the only place that I will eat cottage cheese. For some reason it’d been a really really long time since we had it at holidays and it wasn’t until the Fargo Hotdish Festival that I was reminded of it because Bernbaum’s kugel was so similar. It brought me right back to kugel of my youth, but it had the one inspiring addition of granny smith apples. I LOVED this addition because it added color, crunch, and brightness to an otherwise super heavy dish. So I stole the idea. I added it to my family kugel, along with some cardamom and a bit of lemon for additional depth of flavor, and I fine tuned the sweetness to create the new and improved family kugel that Bernie is going to grow up with.

And it’s of course only fitting that I’m using Our Family goodies to make Our Family Kugel! They make it easy to make this recipe since their cottage cheese and sour cream comes in big enough tubs that you end up using just a whole big tub of each.

Make this for Rosh Hashanah or it’s also great prepped in advance, so make it for Yom Kippur break fast. 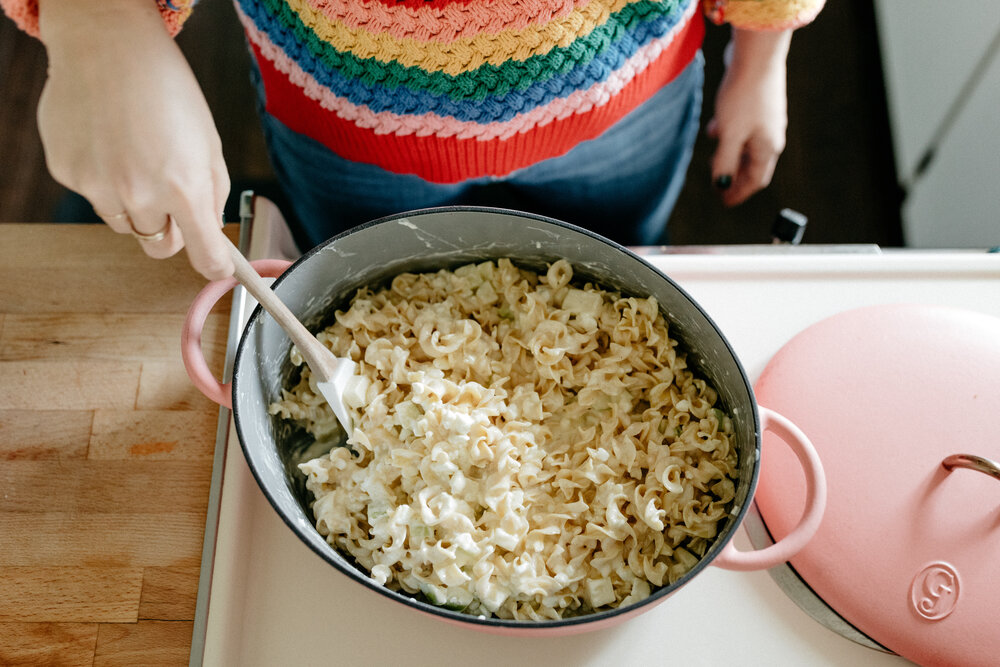 Noodle Kugel with Cardamom and Apples

Zest and juice of 1 lemon

Bring a large pot of salted water to a boil and cook the egg noodles to al dente, about 4-5 minutes. Drain and toss with 4 tablespoons of butter.

In a large bowl, combine the eggs, cottage cheese, sour cream, sugar, milk, 1 teaspoon of cinnamon, cardamom, vanilla, lemon zest, and 1 1/2 teaspoons salt. In a small bowl, toss the apples with the lemon juice. Fold the noodles and apples into the cottage cheese mixture and then transfer to the casserole dish.

In a small bowl, melt the remaining 2 tablespoons of butter and add the pecans, brown sugar, remaining teaspoon of cinnamon, and a good pinch of salt. Sprinkle it all over the top of the noodles. Bake until set, about 1 hour. Let cool slightly and serve. 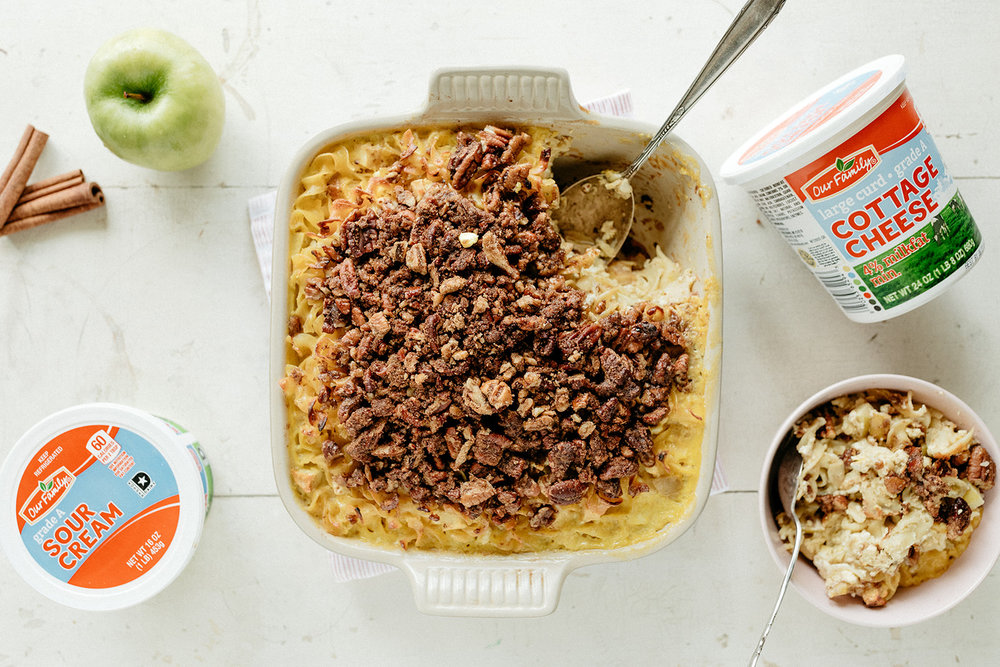 this recipe was created in partnership with our family! 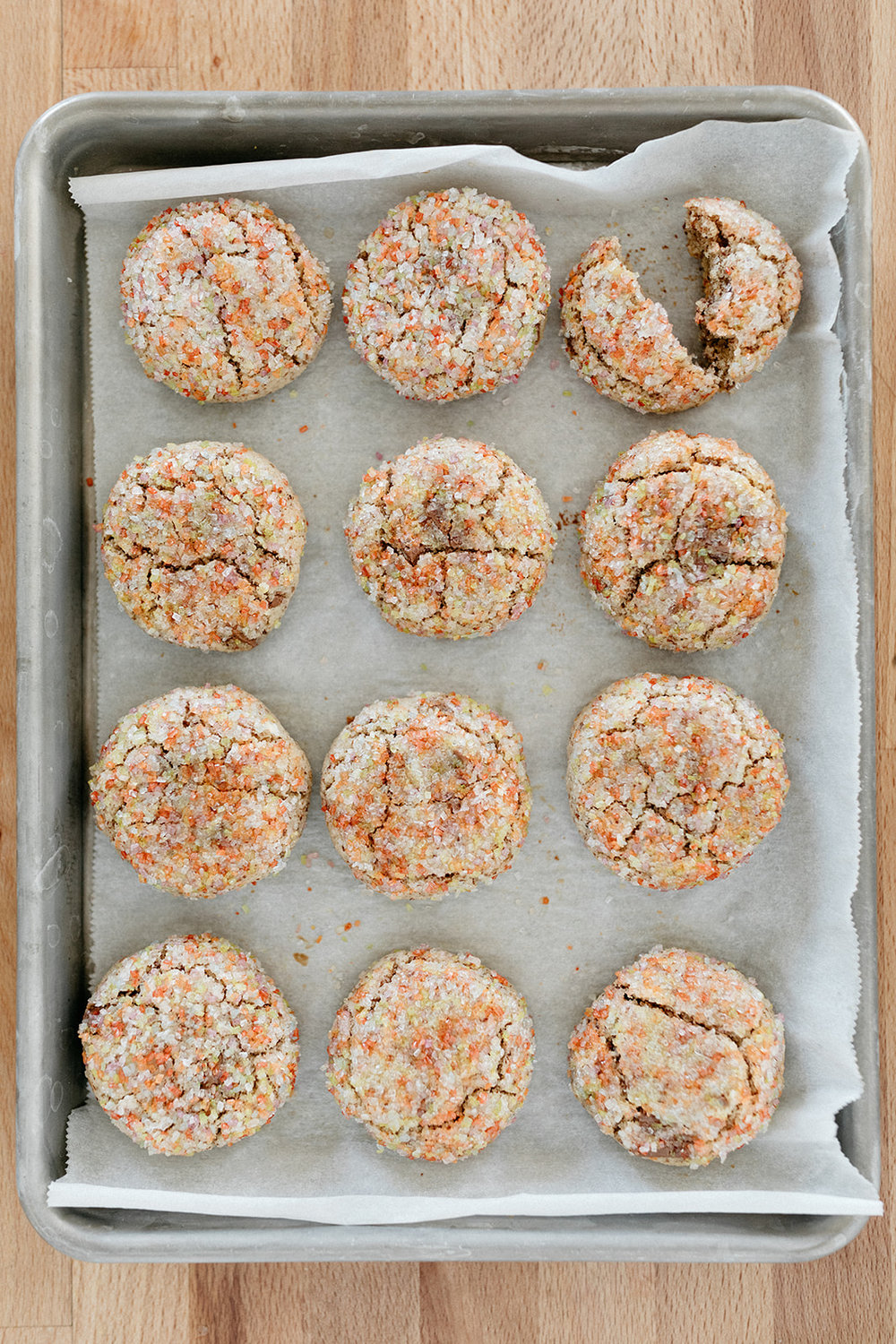 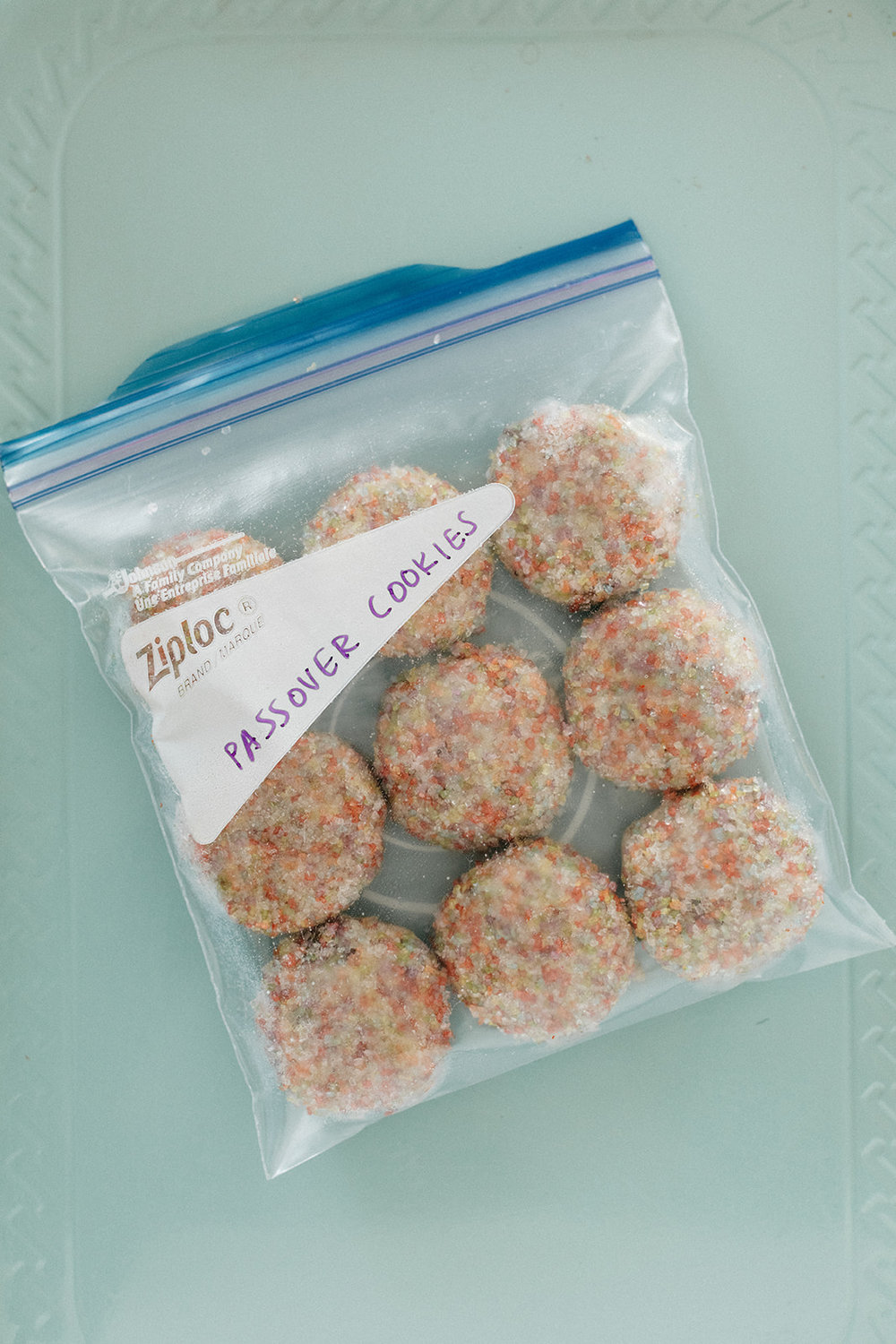 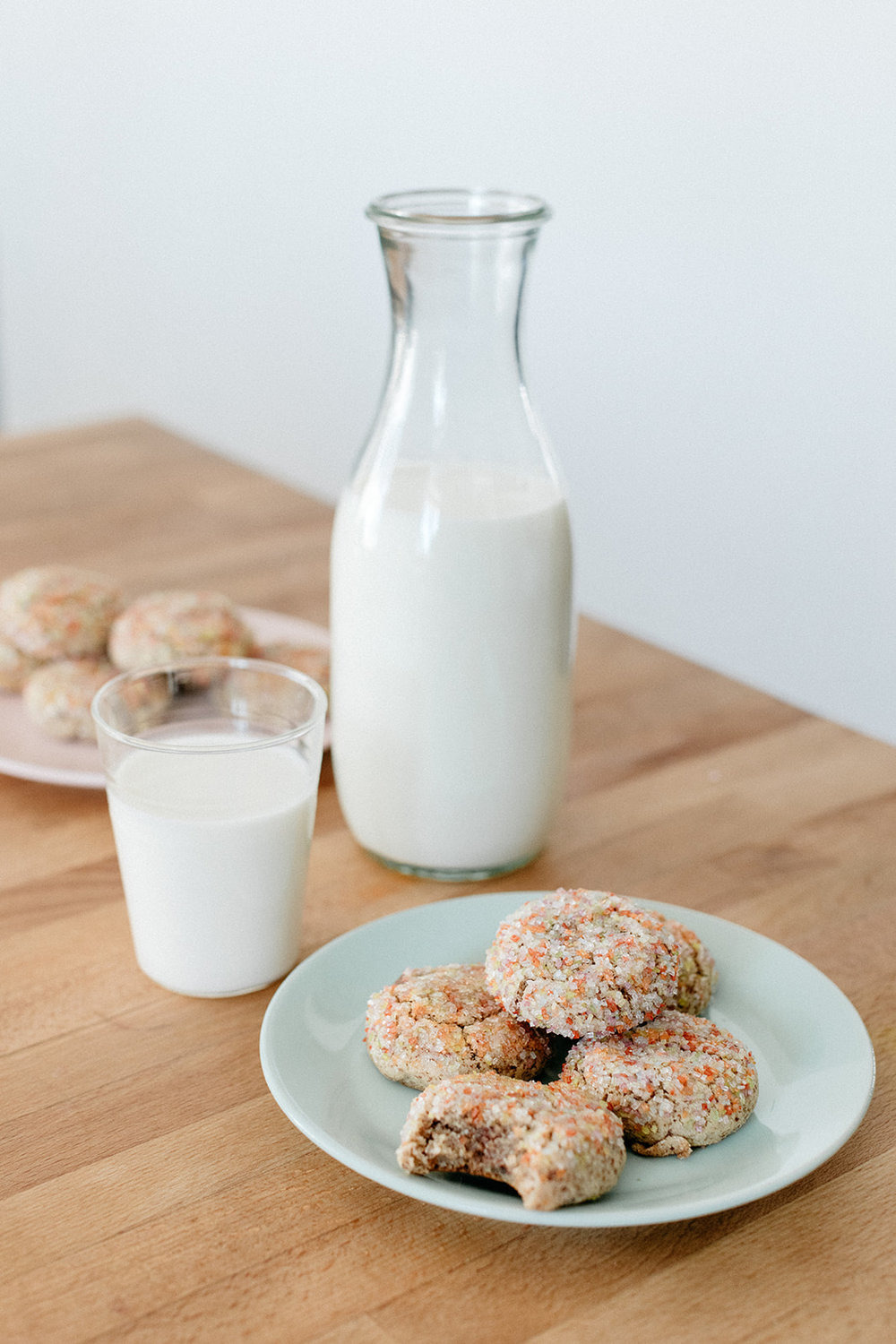 Frozen cookie dough is an essential part of baby meal prep!!!! And just because Passover is around the corner doesn’t make this any different. Well, it actually kind of makes it easier because these cookies are, like, stupidly simple to make. One-bowl, three-minute simple. Remember this Passover cookie cake from a few years ago? Magic, right?! So chewy, delicious, and satisfying, and easy enough that some people asked if there was a typo and if there should have been more steps (no typo!). So these chocolate chip cookies are just hand-held versions of that cake that kind of take on a new life of their own because when they’re in this smaller shape and rolled in sugar, they get a crisp crunchy shell but stay so amazingly chewy inside. And also, you can keep this dough in the freezer and bake off only one or two cookies at a time as needed, so the convenience is real. And the flavor is awesome too, thanks to a tasty nut flour base. If you’d like to change things up and add dried fruit or M&M’s or other candy or chopped nuts, you can totally do that with these. Happy almost Passover! 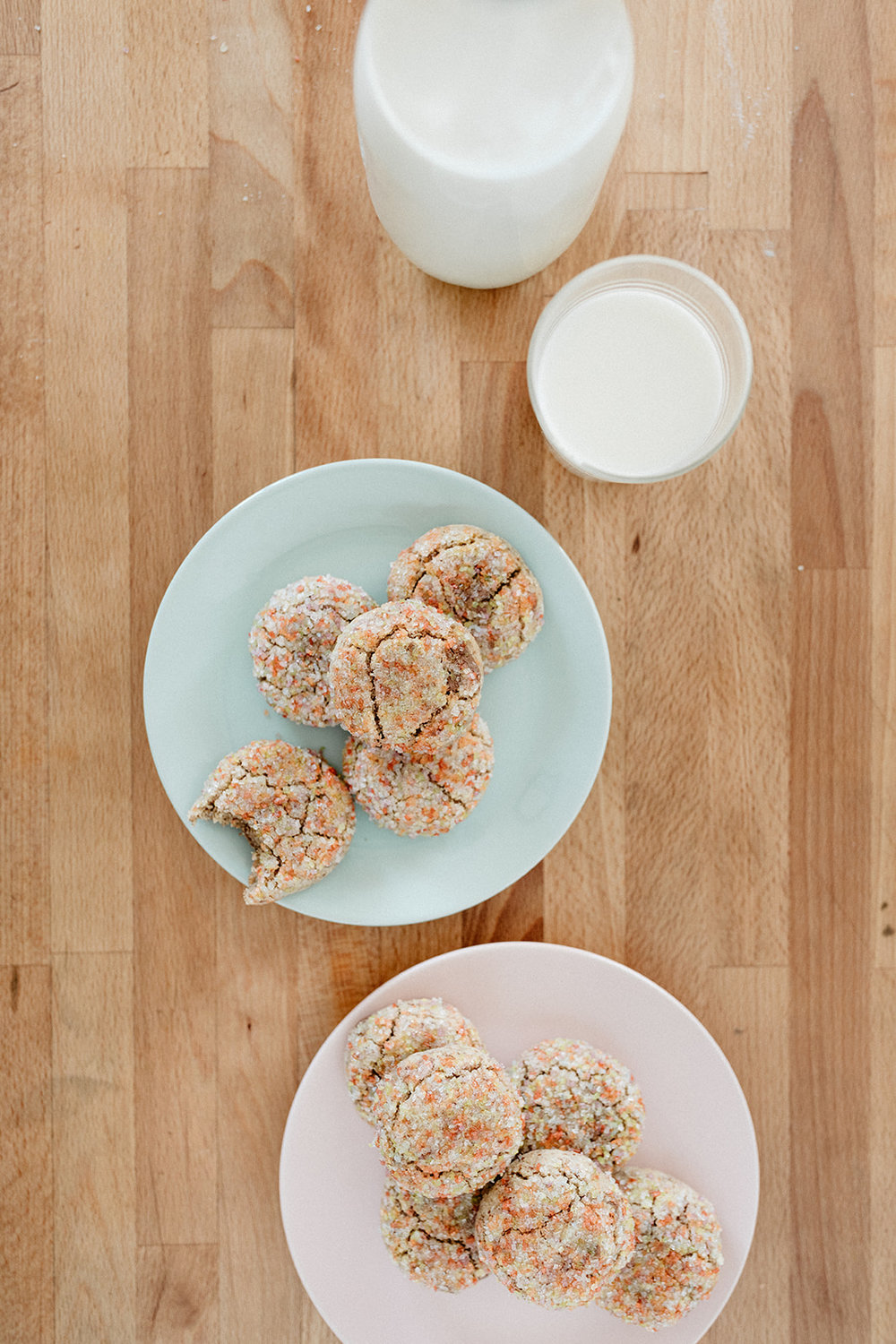 If baking immediately, preheat the oven to 350ºf. If preparing for the freezer, see below for directions. Line a baking sheet with parchment and set it aside.

In a large bowl, combine the flours, sugars, and salt. Add the egg, vanilla, and almond and stir to combine and then stir in the chocolate. The whole mixture might seem dry at first, but keep on stirring and it will come together. Roll balls that are slightly larger than golf balls and roll them in sanding sugar. Flatten them slightly and then place them on the baking sheet, 1” apart.

If baking immediately, bake for 15 minutes, until lightly browned on the bottom. Let cool slightly and enjoy! They will be super gooey when they come out of the oven but they will get chewy as they cool.

If preparing to freeze, stick the baking sheet in the freezer until the dough is frozen, about an hour or so, and then transfer to a ziploc bag. Label and freeze for up to 3 months. Bake cookies 1” apart on a baking sheet lined with parchment at 350ºf for about 20 minutes, or until lightly browned on the bottom. Let cool slightly and enjoy! They will be super gooey when they come out of the oven but they will get chewy as they cool.