I bought a little jar of pesto recently and have been having fun finding ways to add it to everyday recipes. Yesterday I noticed a half bag of macaroni that had been sitting in my pantry for a few months and I just knew it was begging for the pesto treatment. So, I whipped up a quick […]

I bought a little jar of pesto recently and have been having fun finding ways to add it to everyday recipes. Yesterday I noticed a half bag of macaroni that had been sitting in my pantry for a few months and I just knew it was begging for the pesto treatment. So, I whipped up a quick béchamel sauce, stirred in some grated Parmesan, and a good dollop of pesto. I poured the luxurious sauce over my cooked macaroni then aded couple handfuls of thawed frozen spinach (because I’m all about balance), and had myself the most delicious and creamy pesto mac and cheese. 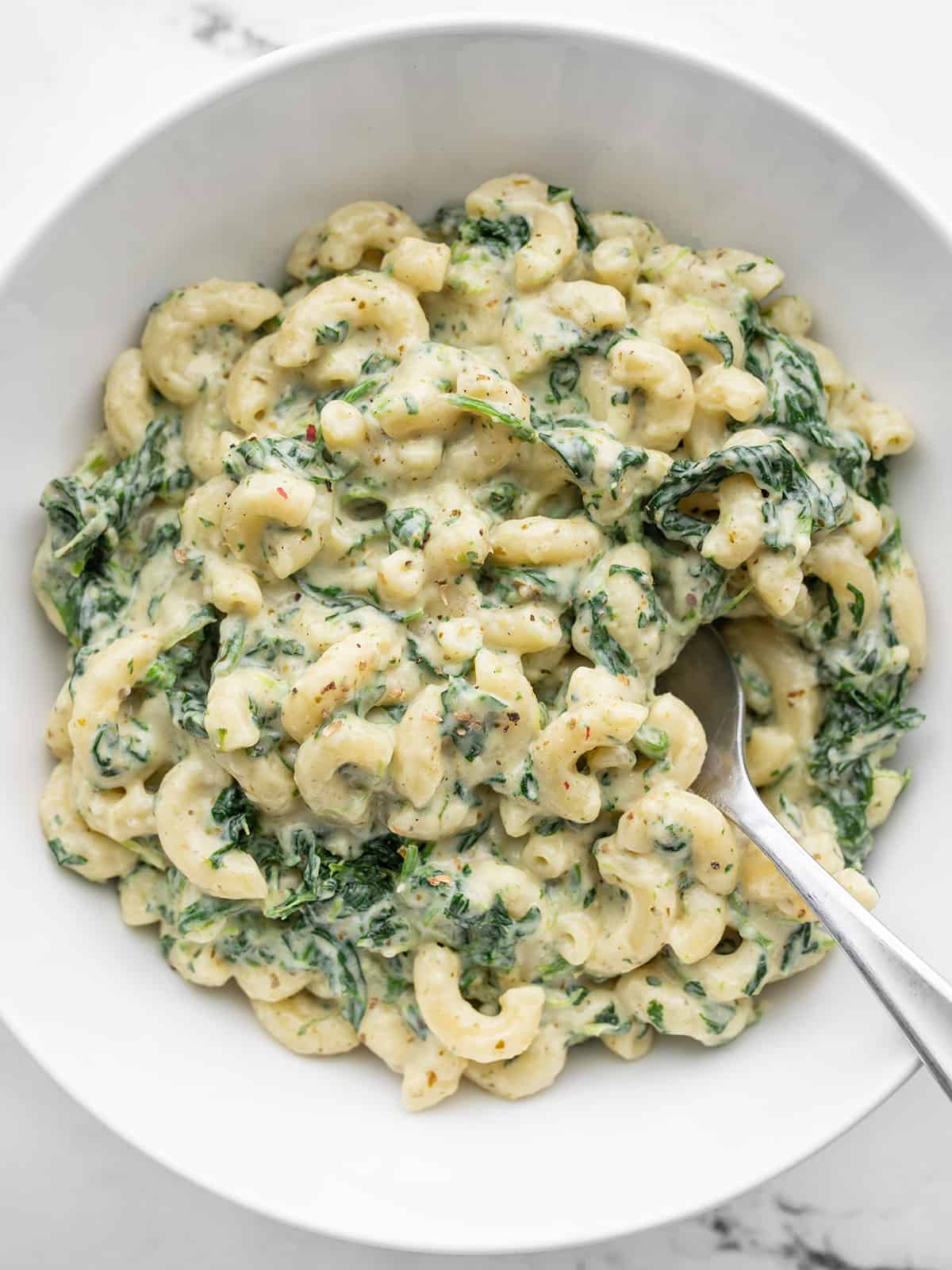 What Kind of Pesto is Best?

I used a simple basil pesto, but the wonderful thing about this recipe is that it is very flexible. You could do a homemade Kale Pesto, you could do a sun-dried tomato pesto, or practically any flavor pesto that you’d like.

How to Use Leftover Pesto

Pesto is definitely an expensive ingredient, but it’s so potent that you really don’t need a lot to add big flavor to your recipes. The little jar I bought contains about 3/4 cup pesto and costs $3.99. I usually only use about ¼ cup at a time in a recipe, so there is always some leftover. Here are some other recipes that use pesto:

If you can’t find uses for your leftovers immediately, pesto can be frozen. A lot of people like to spoon it into ice cube trays so they can grab a couple tablespoons at a time to toss into recipes like pasta, salad dressings, and other sauces.

What Else Can I Add to Pesto Mac and Cheese?

You can really take this recipe so many different directions! Try adding a handful of sun dried tomatoes, or maybe some chopped up rotisserie chicken. Or try topping it with some crumbled feta, bacon bits, or some buttered breadcrumbs! 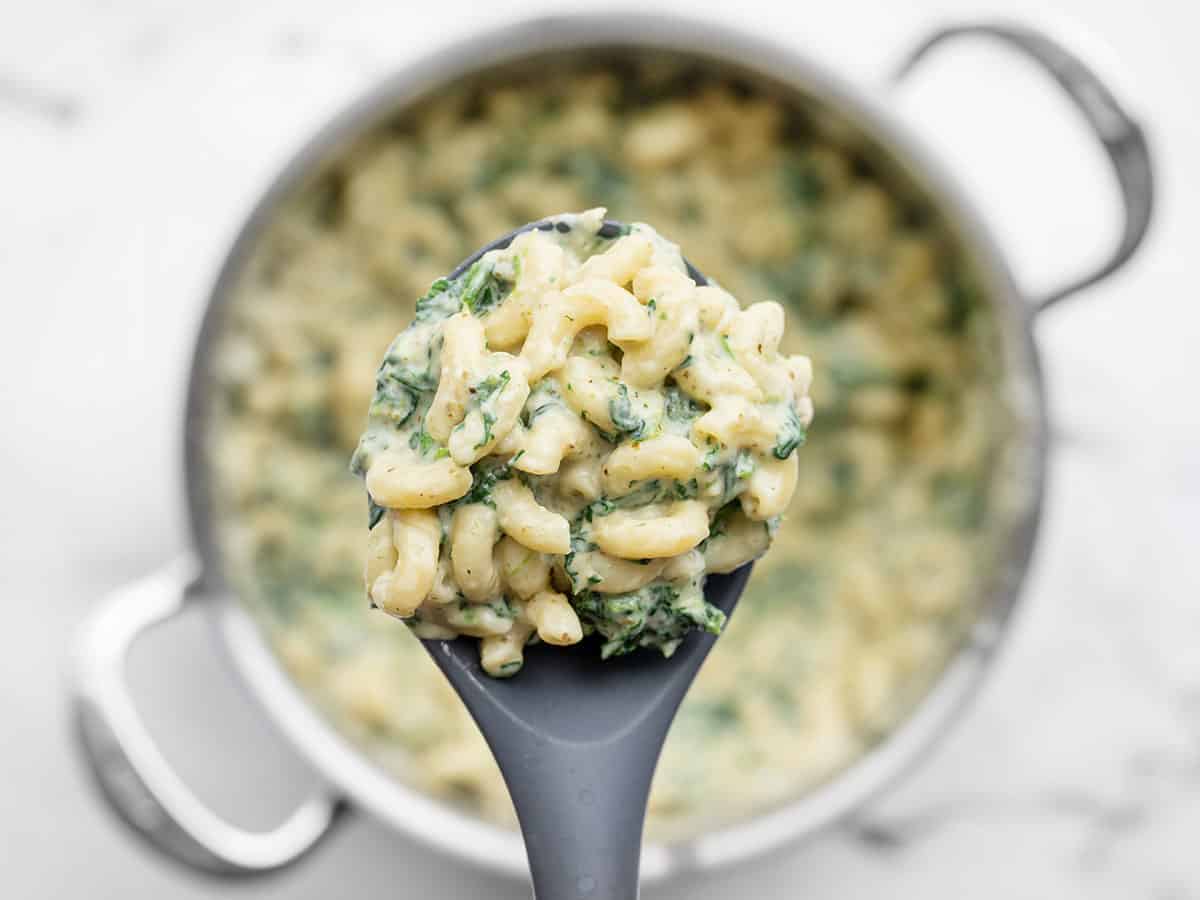 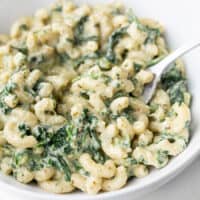 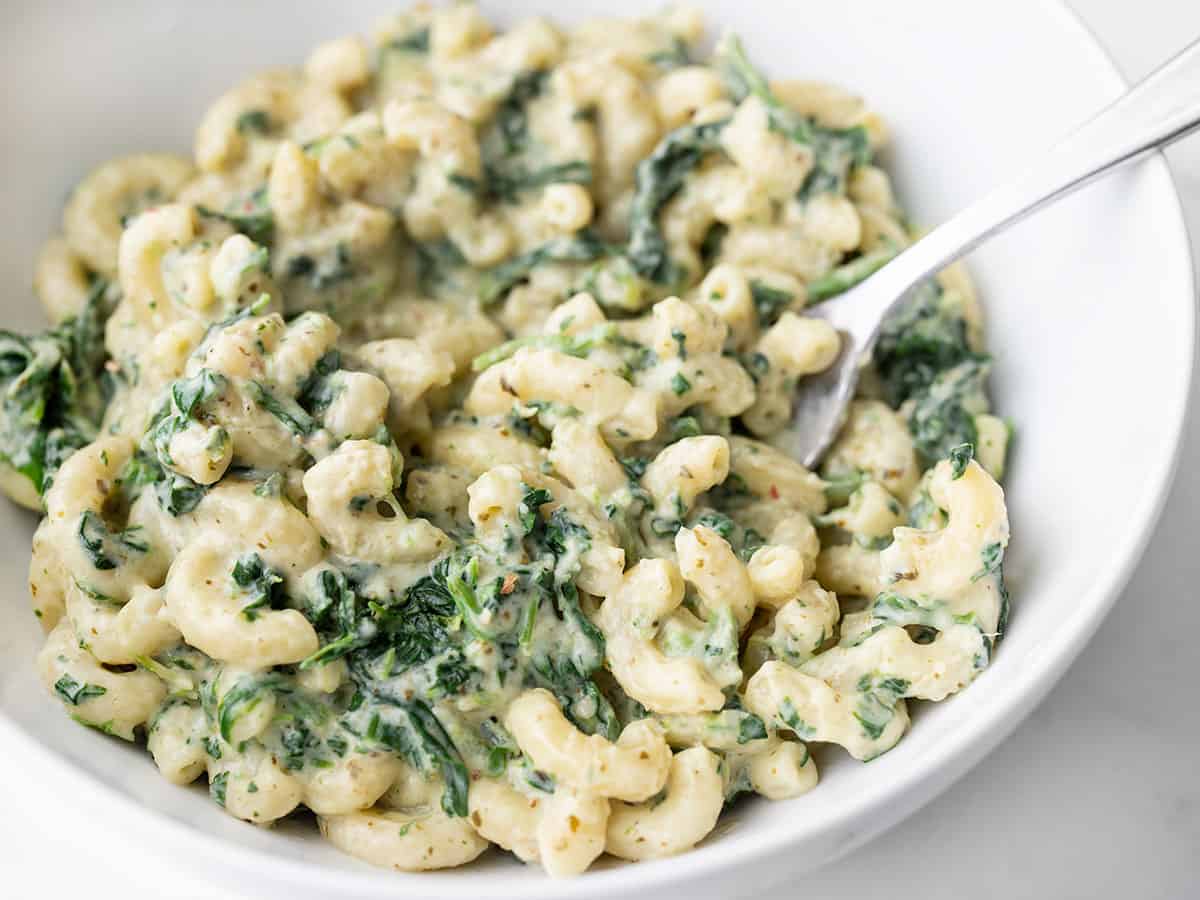 How to Make Pesto Mac and Cheese – Step by Step Photos 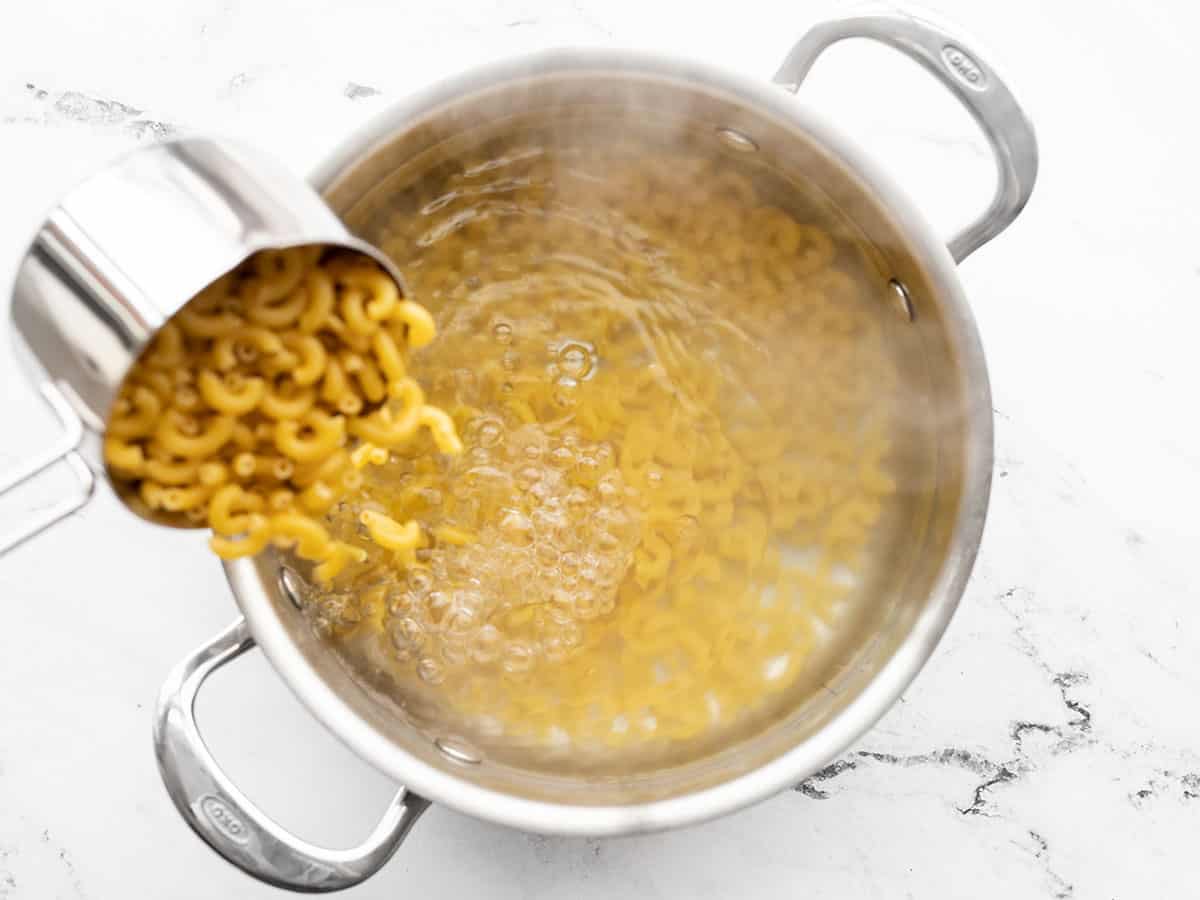 Bring a large pot of water to a boil for the macaroni. Once boiling, add two cups of macaroni and continue to boil until tender but not mushy. Drain the pasta in a colander. 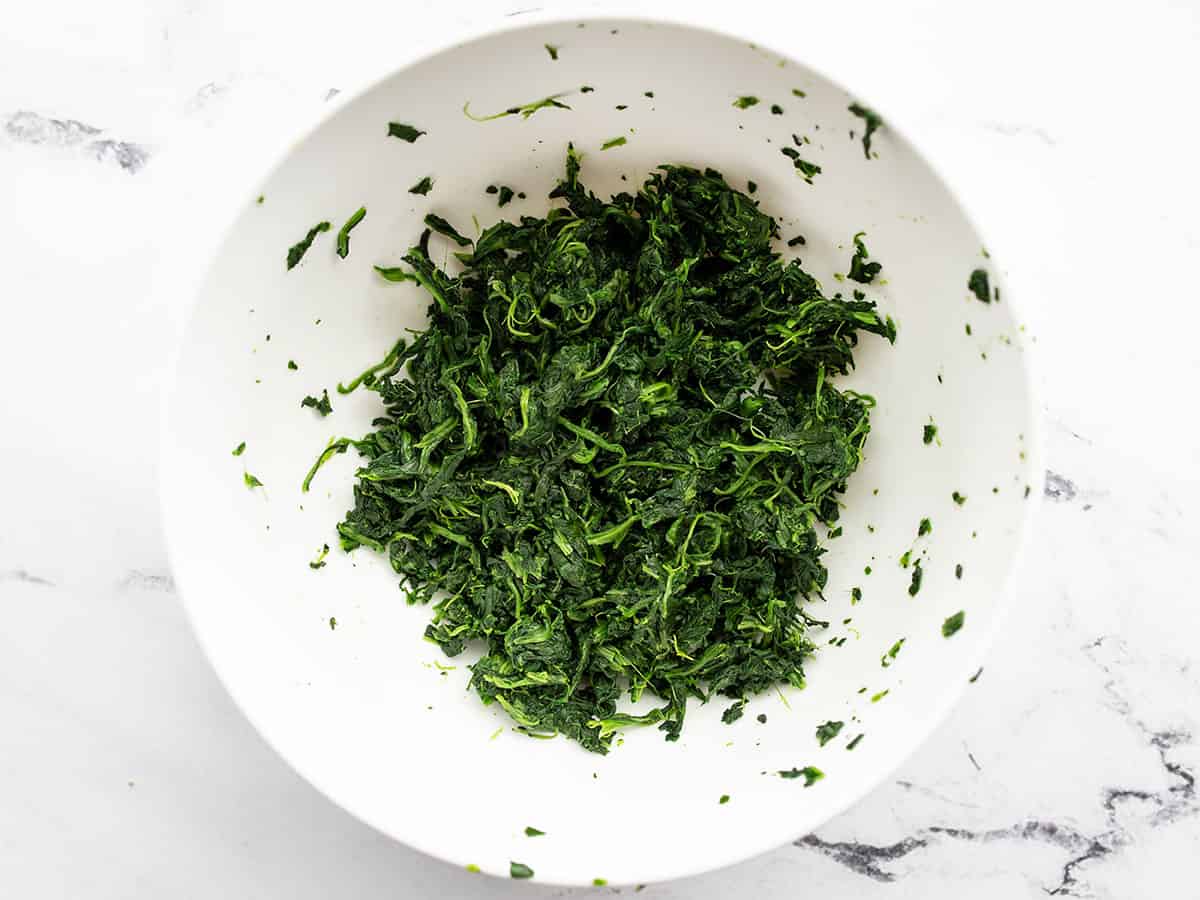 While the macaroni is boiling, thaw 1/2 lb. spinach and then squeeze out some of the excess water. It doesn’t have to be bone-dry, just make sure it’s not sopping wet. 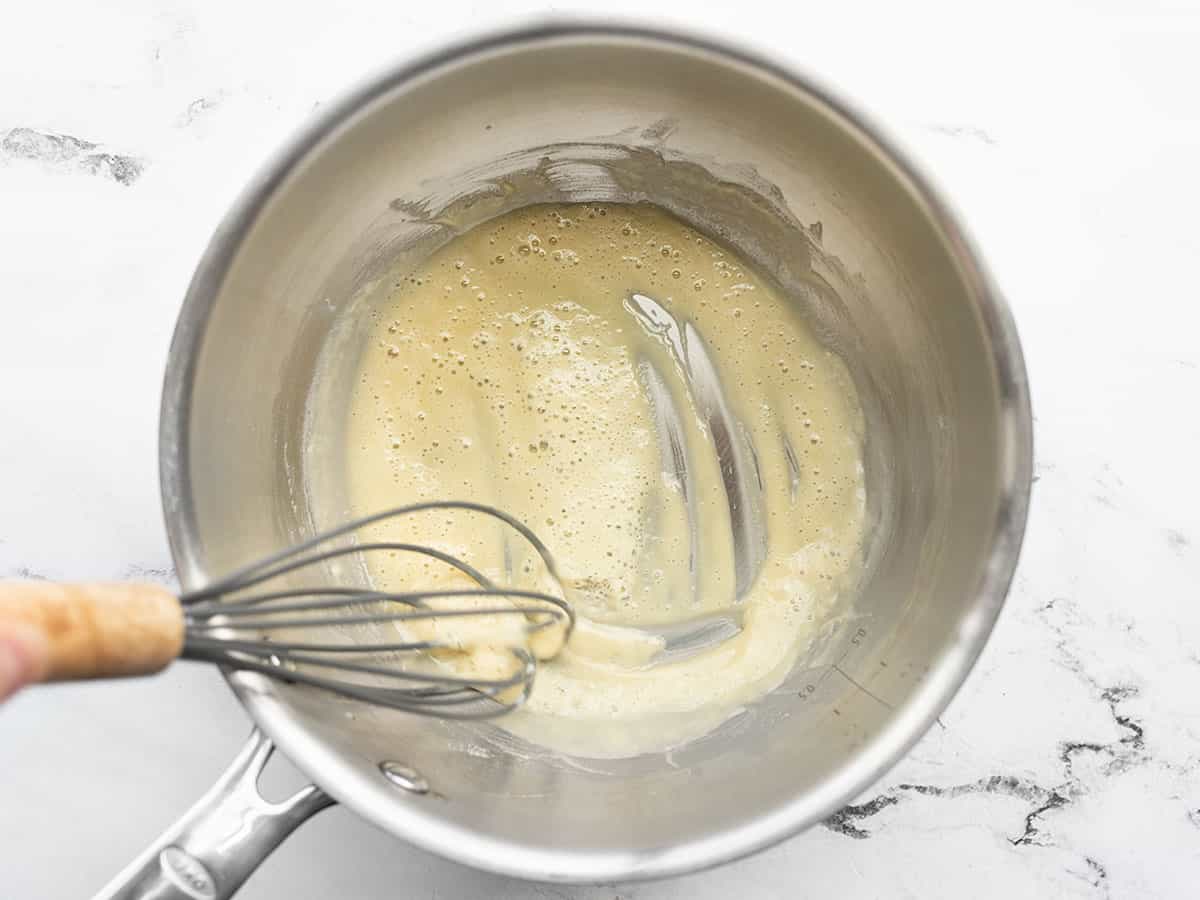 Place 2 Tbsp butter and 2 Tbsp flour into a small sauce pot. Heat them over a medium flame while whisking. Once bubbling, continue to stir and cook for about a minute. This mixture is called a roux (this is a blonde roux, in particular) and is used to thicken the sauce. Cooking it for a minute or so slightly toasts the flour so that you don’t have that raw paste-like flavor to your sauce. 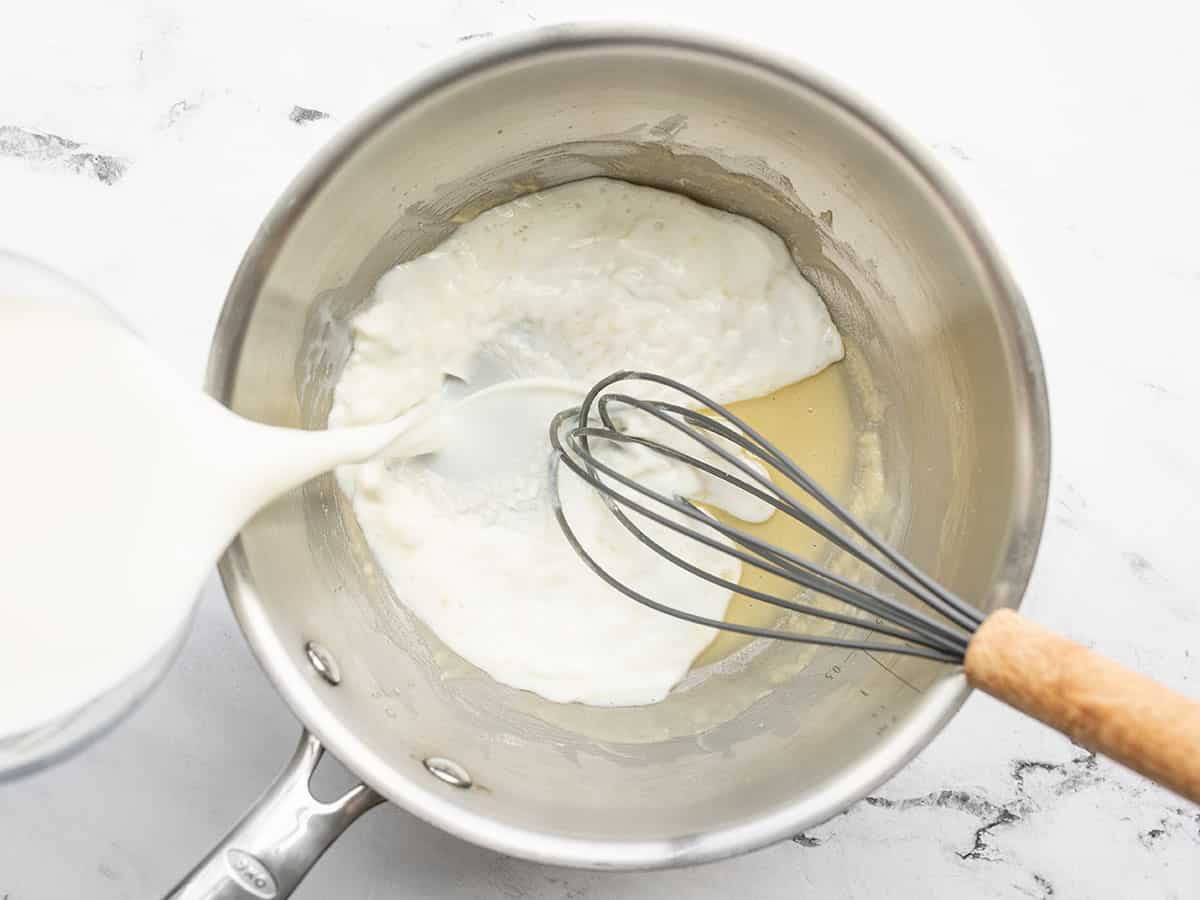 Whisk in two cups of whole milk. Let the mixture come to a simmer, whisking occasionally to make sure the milk doesn’t scorch on the bottom. 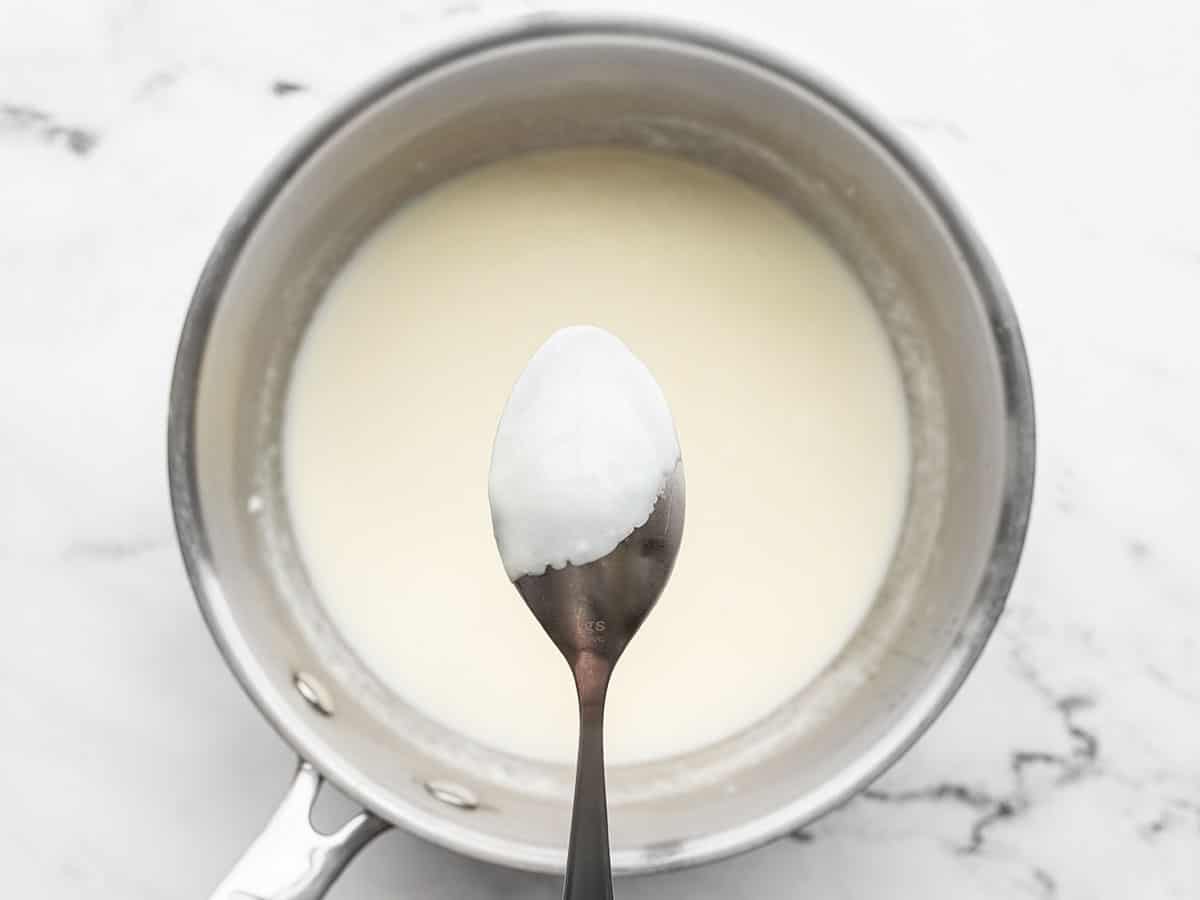 Once the milk starts simmering, that’s when the roux magic happens. The milk will thicken slightly. It won’t be as thick as a cheese sauce at this point, but it should have noticeably more body. Turn the heat off. 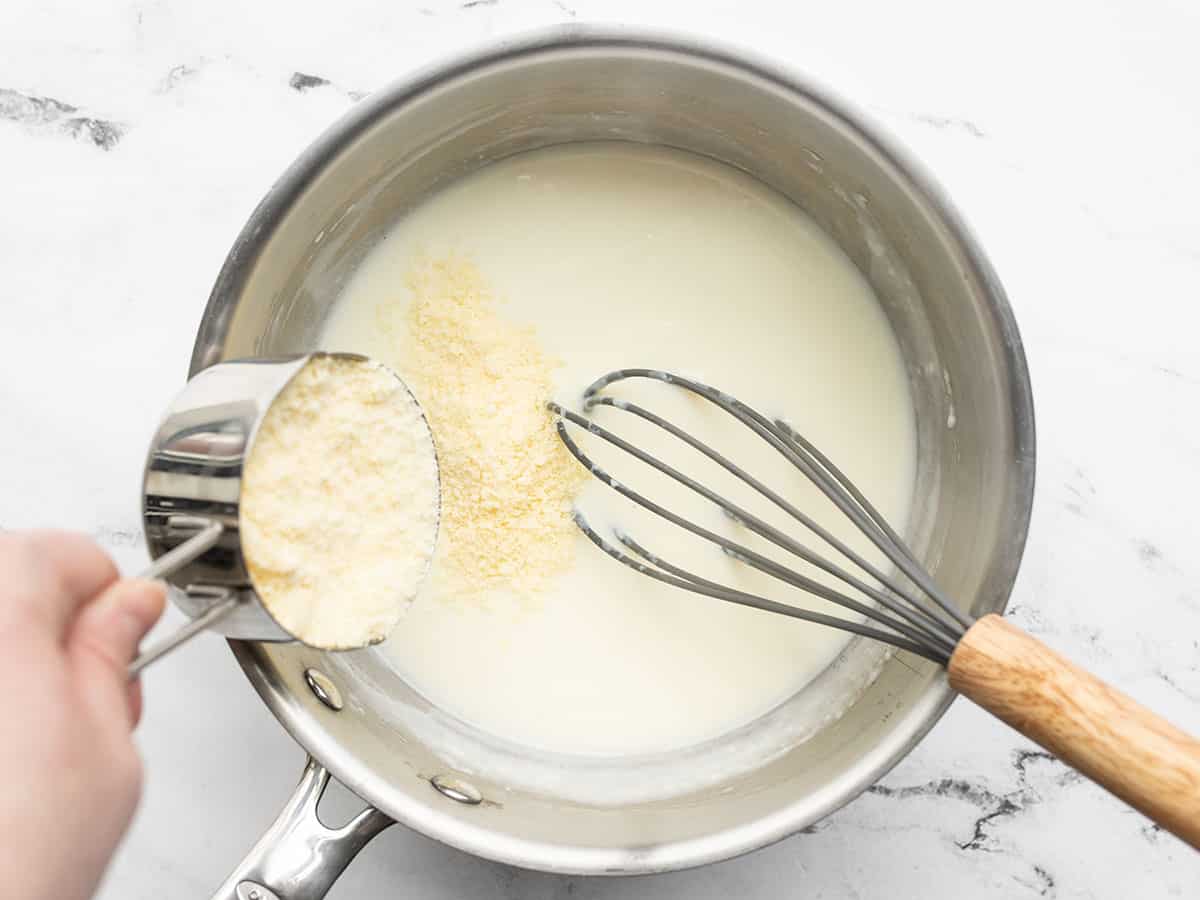 Whisk in 1/2 cup grated Parmesan. The cheese will help thicken the sauce even more. 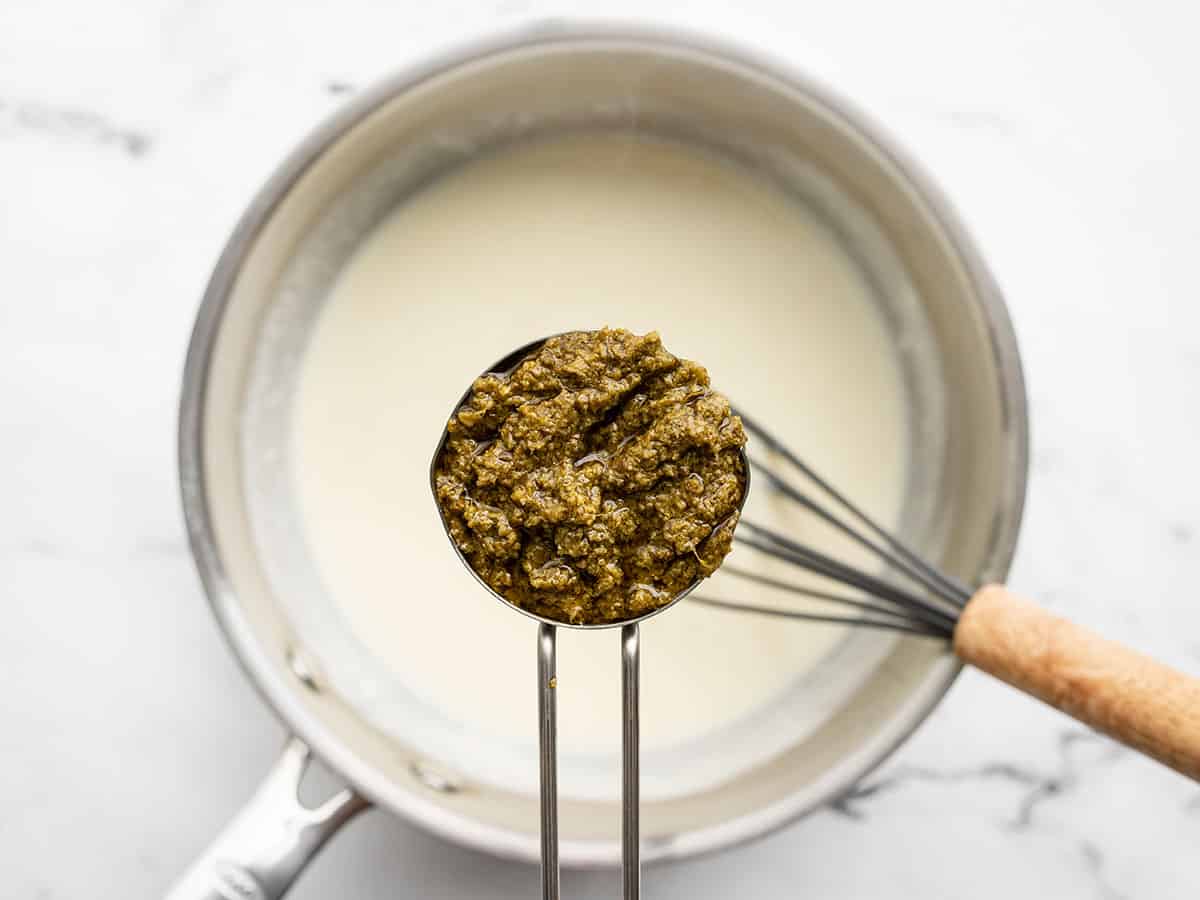 Then whisk in 1/4 cup basil pesto. 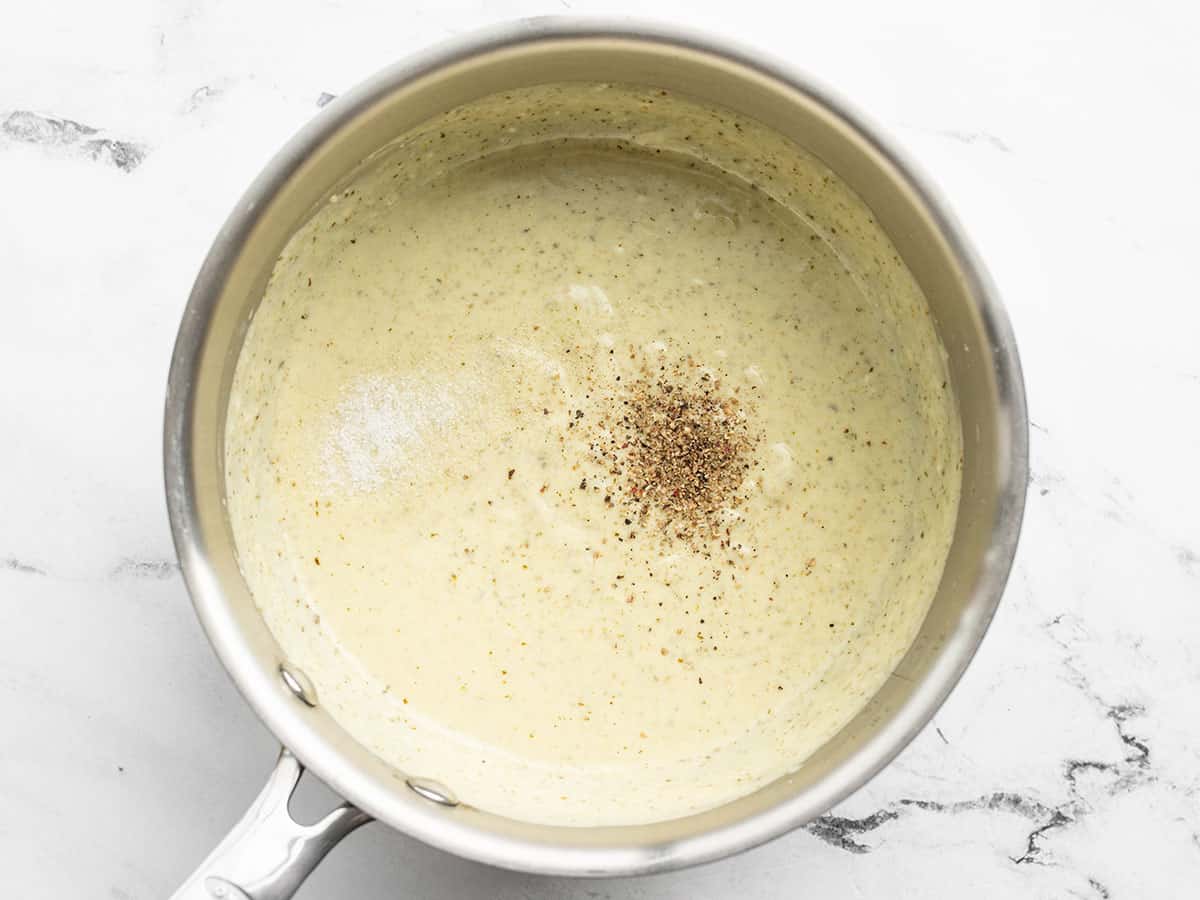 Finally, season the sauce with salt and freshly cracked pepper. You want the sauce to be pretty heavily seasoned because it will taste less concentrated once the pasta and spinach are stirred in. I used 1/2 tsp salt and about 5-10 cranks of a pepper mill. 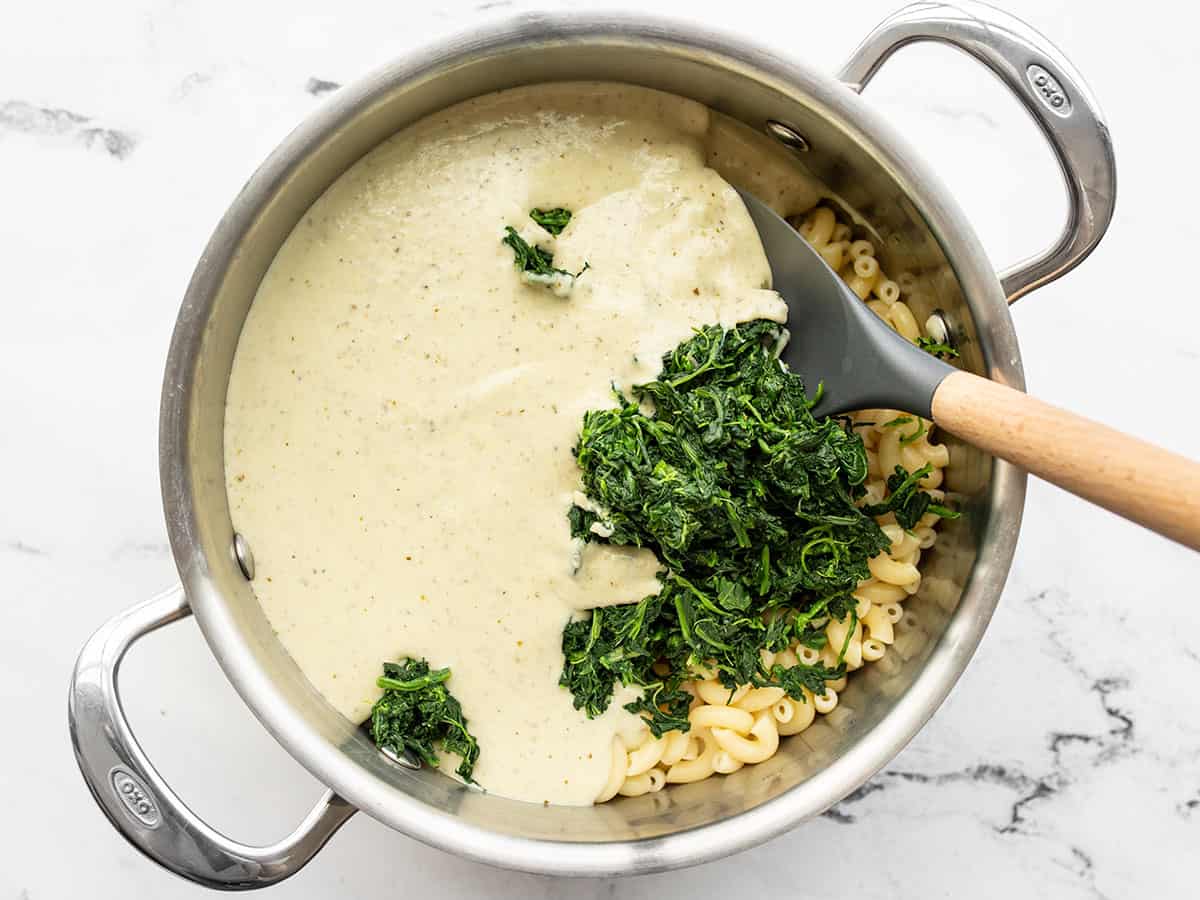 Return the cooked and drained pasta to the large pot it was cooked in, add the thawed and squeezed spinach, then pour the creamy sauce over top. 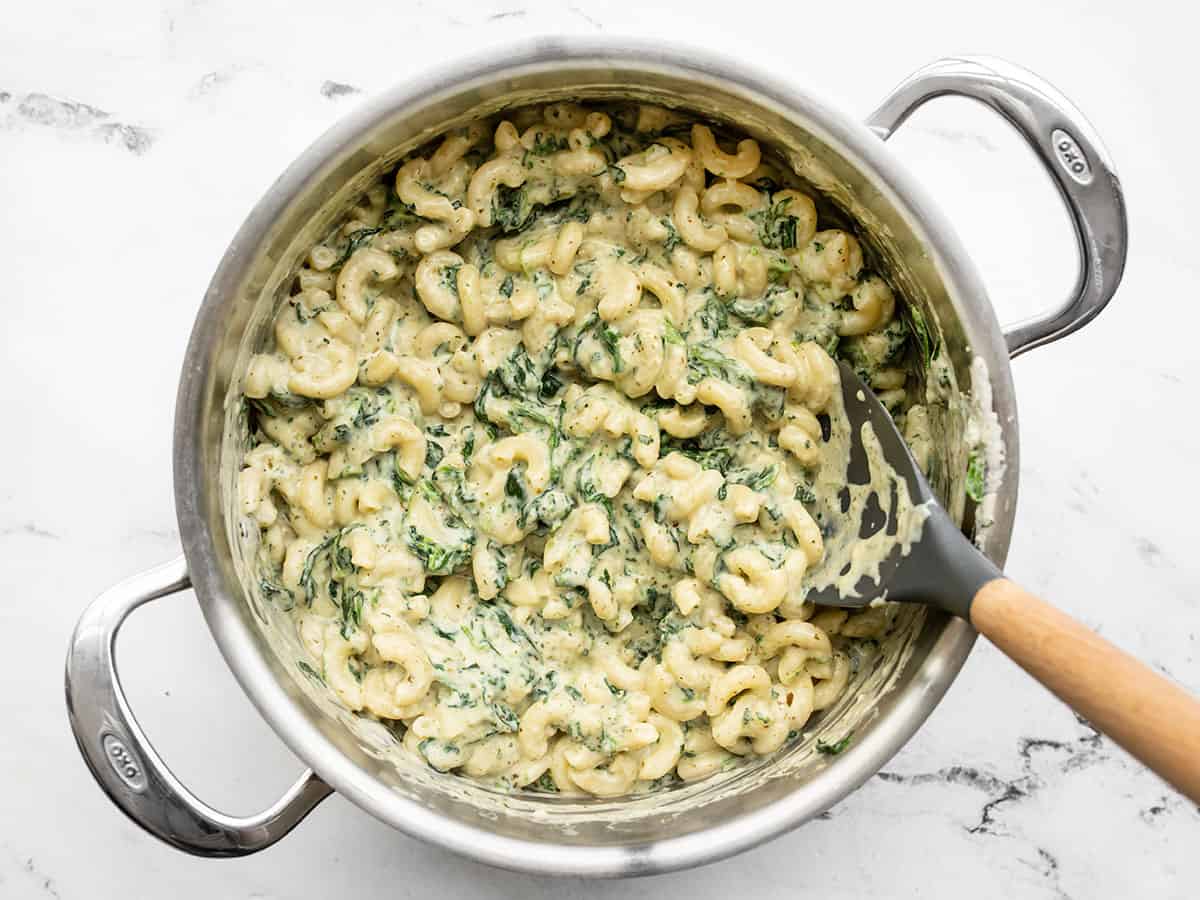 Then stir all that creamy pesto goodness together. Oh my. 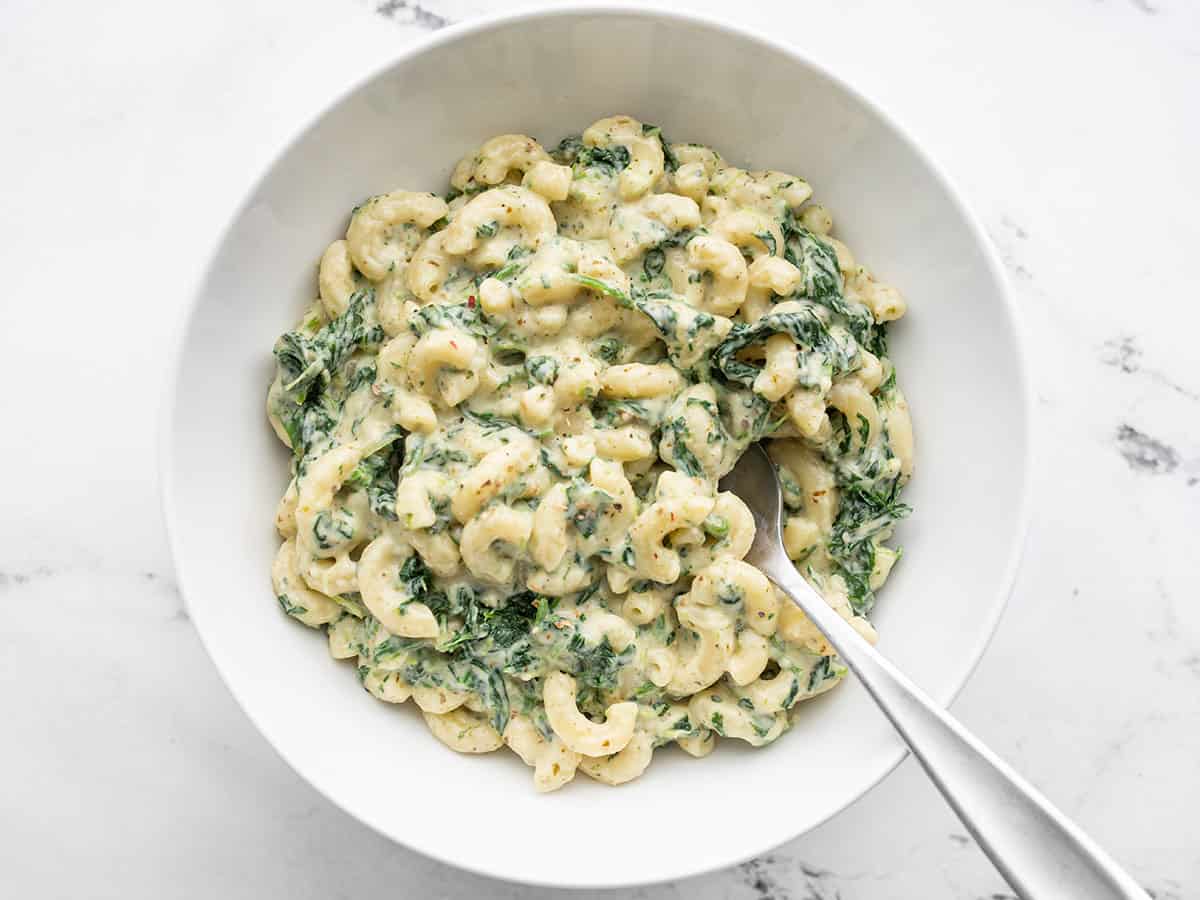 I’ll just say it one more time, then leave it there… Creamy Pesto Mac and Cheese with Spinach–OH MY.

I like to add vegetables into whatever I’m eating, whenever I can, and this Spinach Rice with Feta is such a great way to do that. The spinach adds just a little bit of flavor and color, leaving the rice just about as versatile as plain rice, all while giving you an extra little dose of vegetables with very little effort.

I like to add vegetables into whatever I’m eating, whenever I can, and this Spinach Rice with Feta is such a great way to do that. The spinach adds just a little bit of flavor and color, leaving the rice just about as versatile as plain rice, all while giving you an extra little dose of vegetables with very little effort. It’s a great way to add just a little bit more interest to your plate without making your meal prep a lot more difficult.

This simple side dish is inspired by Spanikorizo, a Greek rice dish with spinach and tomatoes (see an authentic spanikorizo recipe here). I pared it down and decided to make it more like a pilaf instead of a saucy tomato dish, and kept the flavors super simple and light, so it would go with just about anything. I also took a major shortcut and used frozen spinach, just to make it as fast and easy as possible (and also because I always have spinach in my freezer). The result is something I know I’m going to be making very often.

What Kind of Rice to Use

The recipe below is written for any type of long grain white rice (regular, jasmine, or basmati all work). Brown rice requires more liquid and a longer cooking time, which may leave the spinach overcooked. Short grain rice varieties, like arborio, will create a sticker end product.

Can I Use Fresh Spinach?

Yes, I used frozen spinach just to make my life easier, but you can certainly do this with fresh spinach, especially if you have some on hand that you’re looking to use up! I suggest chopping the spinach and sautéing it in the pot until wilted, just after sautéing the garlic.

What to Serve with Spinach Rice

This week I served this Spinach Rice as the base for a bowl meal, along with Yogurt Marinated Chicken and some grape tomatoes. This rice would also go great with my Beef Kofta Meatballs and Roasted Vegetables, Sheet Pan Greek Chicken and Vegetables, or Chicken Piccata. 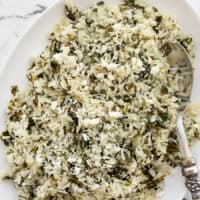 How to Make Spinach Rice with Feta – Step by Step Photos

First, thaw ½ lb. frozen chopped spinach (either at room temperature or in the microwave) and then squeeze out the excess water. Mince two cloves of garlic and add them to a medium saucepot with 2 Tbsp butter. Sauté the garlic over medium heat for 1-2 minutes.

Add the thawed and squeezed spinach to the sauce pot.

Give the pot a brief stir to make sure everything is combined (the spinach will float to the top). Place a lid on top, turn the heat up to high, and bring it up to a full boil. Once it reaches a full boil, turn the heat down to low, and let the rice simmer for 15 minutes. After 15 minutes, remove the pot from the heat and let the rice rest for five minutes, without removing the lid.

After resting for five minutes, remove the lid and fluff the rice with a fork, gently folding the spinach back into the rice as you fluff.

Add the crumbled feta to the rice and fold it in to combine (you can save a little to garnish when serving, if you’d like).

Despite its “swampy” appearance, this soup is simply one of the best things I’ve ever eaten. If you like tomato soup, you’ll adore Swamp Soup. It’s like tomato soup on steroids and with a grilled cheese built right in. The broth is incredibly thick and hearty, it’s full of tons of vegetables that add texture […]

Despite its “swampy” appearance, this soup is simply one of the best things I’ve ever eaten. If you like tomato soup, you’ll adore Swamp Soup. It’s like tomato soup on steroids and with a grilled cheese built right in. The broth is incredibly thick and hearty, it’s full of tons of vegetables that add texture and flavor, and let’s not forget those creamy, gooey bits of swiss cheese in every other bite. It’s TO DIE FOR. 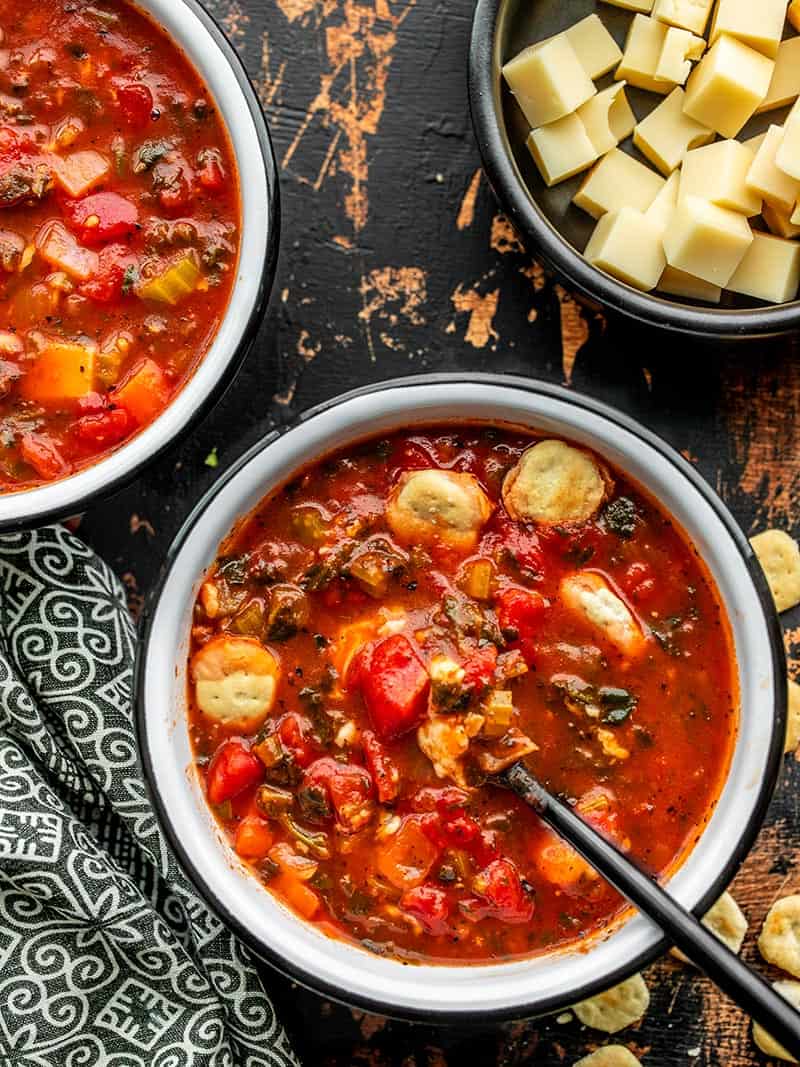 My favorite thing about this soup is that it’s incredibly fast and easy. It’s ready to eat as soon as it’s heated through, although you can always let it simmer a bit longer, if you want. And if you have some chopped carrots and celery stashed in your freezer (scroll down to the step by step photos if you’re wondering why you’d ever have that in your freezer), it goes even faster!

How to Serve Swamp Soup

As mentioned above, this soup has melty chunks of Swiss cheese floating around in every bowl. While you can add the Swiss cheese to the whole pot, if you don’t plan to serve it all in one sitting, I suggest adding the cheese to each bowl just before serving (after reheating). You’ll probably also want some sort of cracker or crusty bread for dipping!

Can I freeze it?

Yes indeed! This soup is great for stocking your freezer. After cooking, divide your soup into single servings, cool it completely in the refrigerator over night, then transfer to the freezer the next day. You can freeze in quart-sized freezer bags or any freezer-safe meal prep container.

I love the subtle flavor of Swiss with this soup, but if Swiss isn’t your jam you can use mozzarella instead. Mozzarella melts in a similar way to Swiss, so you’ll get the same effect in the soup. Plus, mozzarella also goes great with tomato. If you don’t care about the melty aspect, a little crumbled feta would also be amazing sprinkled onto every bowl. 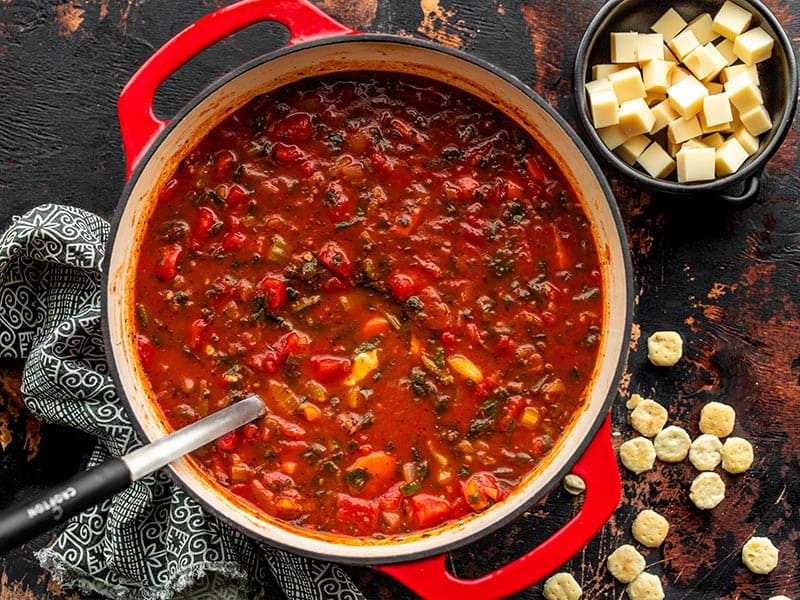 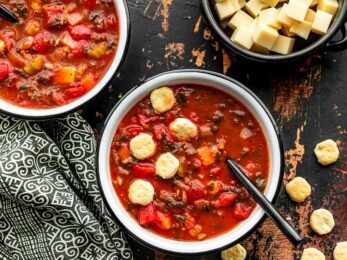 How to Make Swamp Soup – Step By Step Photos 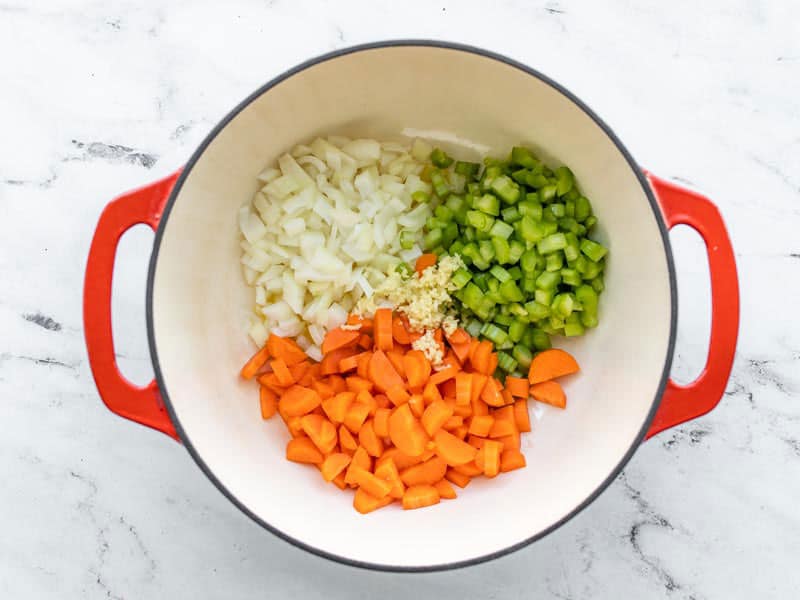 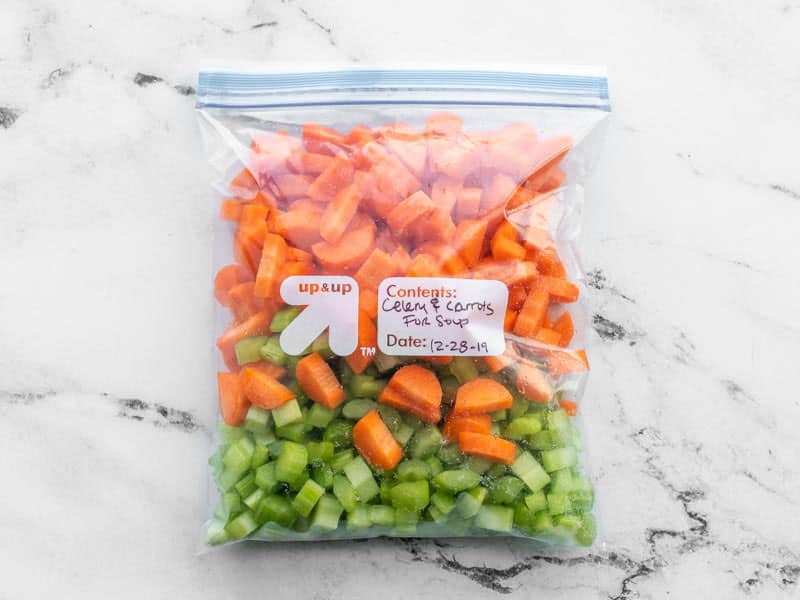 Since most of my soups begin with 1/2 lb. chopped carrot and 3-4 ribs of celery, I just go ahead and chop up the rest of my carrots and the bunch of celery, and freeze it for the next time I make a soup. That way I don’t have to do as much chopping later. I just dump the bag of frozen veggies into my soup pot and go! 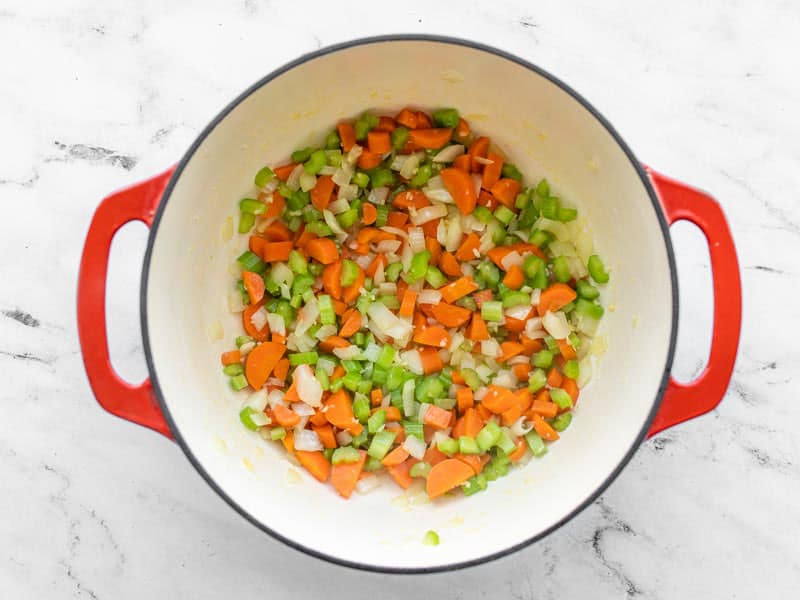 Sauté the onion, carrots, celery, and garlic over medium for about five minutes, or until the onions are soft. 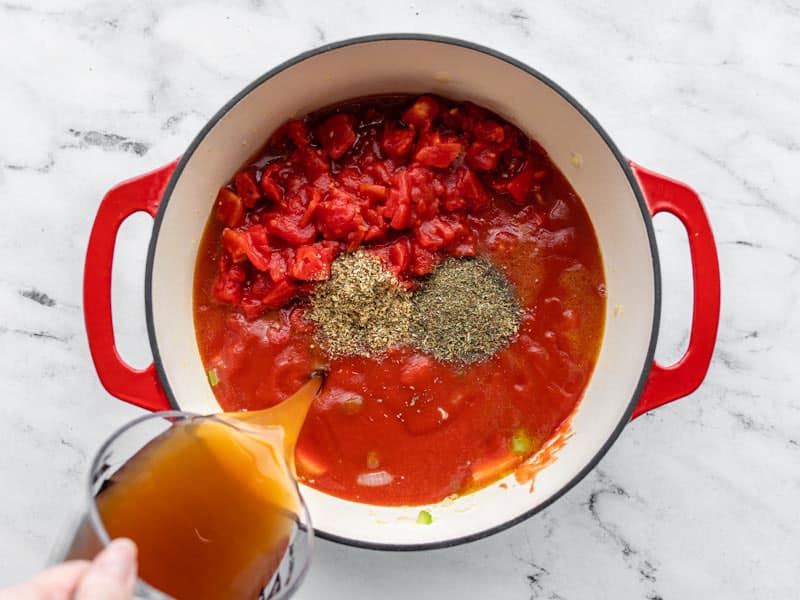 Next, add three 8 oz. cans of tomato sauce, three 15 oz. cans of diced tomatoes (with juices), 1 Tbsp dried basil, 1 Tbsp dried oregano, and 1.5 cups vegetable broth to the pot. Stir to combine, then allow the soup to come up to a simmer. 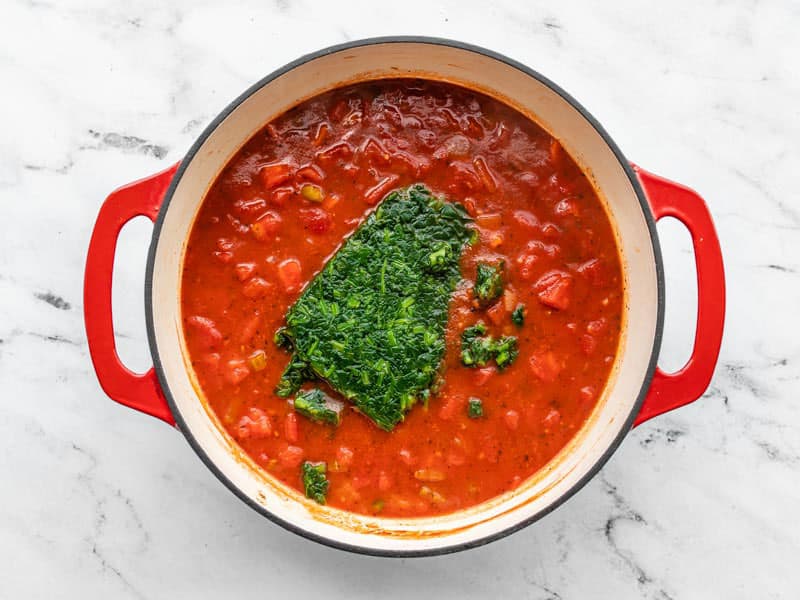 Once the soup comes up to a simmer, add a 10 oz. block of frozen chopped spinach (no need to thaw). You can use frozen bagged spinach, too, just estimate about 10 oz. Stir the spinach into the soup until it thaws and heats through. 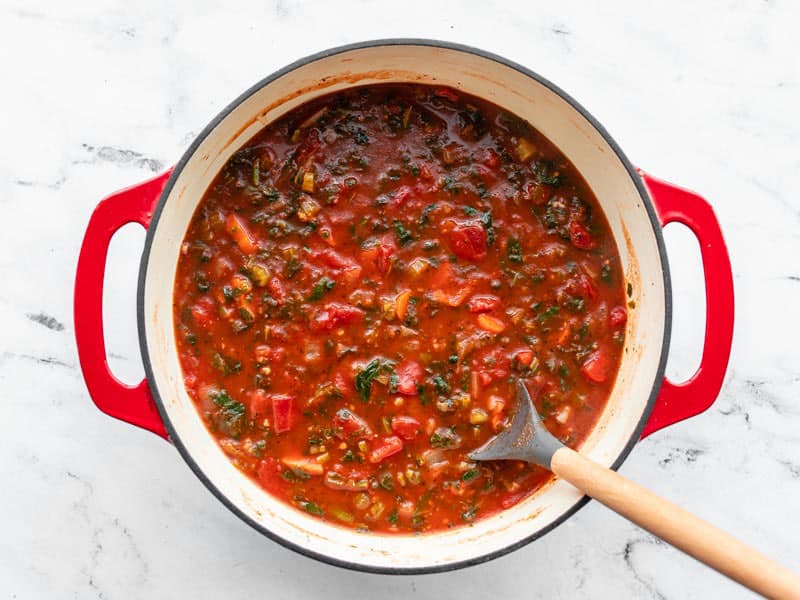 Once the soup is heated through, give it a taste and add salt if needed. Mine did not need any additional salt, but that will depend on your taste buds and the salt content of your canned goods and vegetable broth. 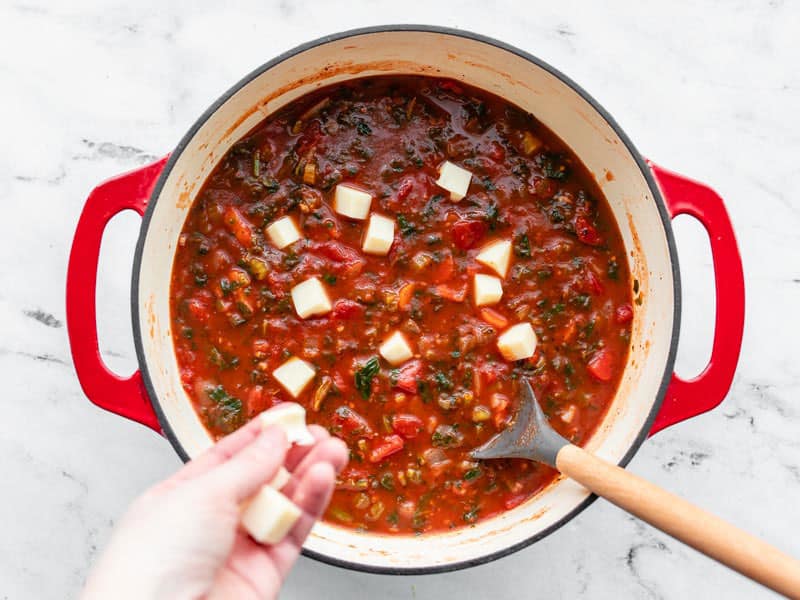 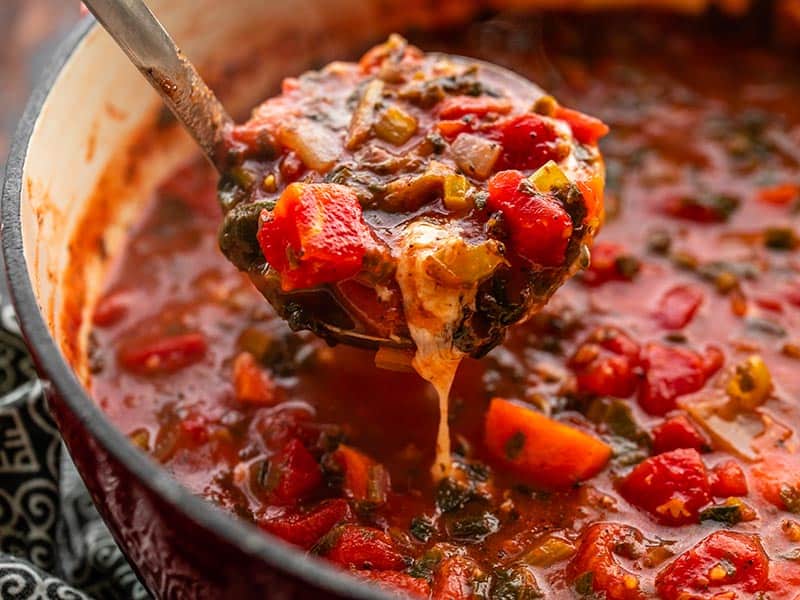 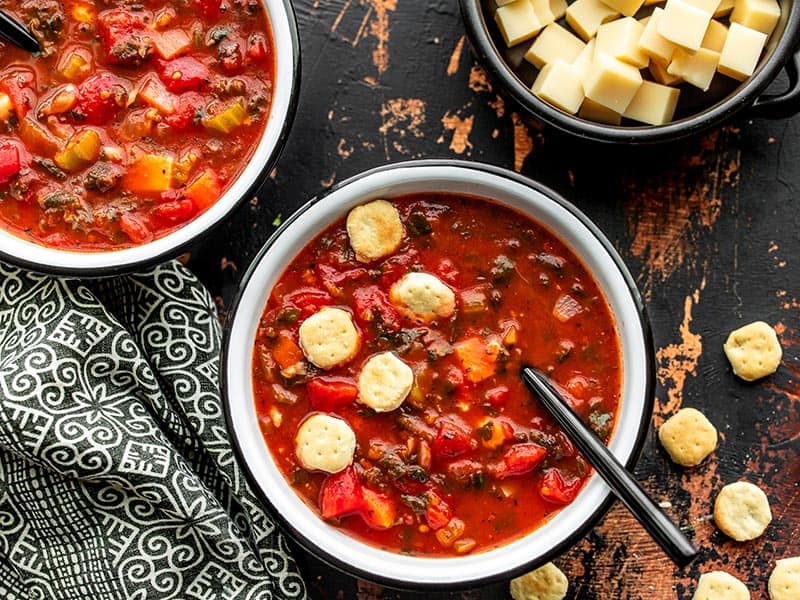